What I Did on My Summer Vacation

This post is brought to you by Tom, who I think must be part mountain goat. He has got the surest footing on loose scree that I've ever seen. And now for his story...

Saturday 8/19
The day began with a 6 AM flight from Washington to Los Angeles and then a second flight to Fresno. There’s no easy way across the Sierras from the west side to the East side, which was our destination. Because the way is blocked by Sequoia National Park and Yosemite Park, the choice is drive north and through Yosemite Park or drive south of Sequoia and back up the east side to Lone Pine. We chose the southern route and so after about 15 hours of travel we arrived at our camp for the night outside Lone Pine in a BLM campground called Tuttle Creek. 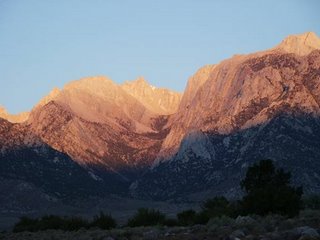 We awoke to a sunrise just beginning to light the massive peaks of the mountains surrounding Mt Whitney to our west. Today our goal is to secure a wilderness permit that will allow us to hike into the John Muir Wilderness area and position ourselves below Mt Whitney for our adventure. Only a handful of permits are available and most are reserved months in advance. With no guarantee there would be any permits available, we dutifully presented ourselves at 11:00 at the Interagency Visitor Center with our fingers crossed. Five minutes later when the park service employee saw there was in fact a permit available to enter the park the following day, he remarked that I must be living right. I explained ‘then there must be a mistake’ but accepted the permit nonetheless.

Now the hard work begins. We have to finish getting supplies for 5 days. Food, more socks, and fuel for the stove… and even harder, we have to make everything fit in our packs. Because we’ll ultimately be climbing up to 14,500’ we need to begin acclimatizing to the altitude. The atmospheric pressure at 14,000’ is about 60% of that at sea level (where I happen to live) and so each breath yields only 60% of the amount of oxygen molecules. A body can mostly adapt to that but it requires some time and ideally a gradual ascent. After a panicked glance at the mound of camping and climbing gear we had amassed, we drive to the trailhead with only day packs to do a quick hike up and back to 11,000’. I’m glad to have done the hike because afterwards I feel a bit sick from the altitude and know the hike will benefit me in the days to come. A final meal and a final beer at the Mt. Whitney restaurant in Lone Pine and back to the tents.


Monday 8/21
We wake early to take down tents and finish packing all the gear. Hold on! There’s no way all this gear will fit in my pack and I have one of the largest packs available! So one more time …. What do I really need and what can stay behind? I put my tent back in the car and take my partner’s small one man tent instead, since he’s decided to sleep in the open all week. We arrive at the trailhead, packs ready, at around 8:00 and before heading out, decide to make use of the scale provided for hikers. My pack weighs in at 65 pounds. Ouch! After 1 mile, the ‘climbers trail’ and the Mt. Whitney Trail split. The North Fork trail is a beautiful and very rugged trail and combines very steep hiking and a good deal of scrambling with hands and feet. After an exhausting 5 hours we stop for the night at Upper Boy Scout Lake (11,300’) where we camp. Temperatures are cool and dry and the coyotes sing us to sleep. 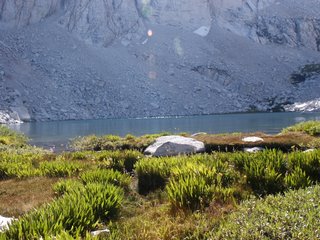 Tuesday 8/22
Up early again for the final hike to Iceberg Lake at 12,600’. We expect the hike to be a somewhat casual 2 hours. This is big country and things appear closer that they are. Now that we’re above the tree line there is often no trail to follow because the ground is strewn with large boulders. Following the ‘trail’ involves scanning ahead for the next cairn (a stack of rocks used to mark the trail). This proves to be the most difficult section of trail thus far and it's four tiring hours later when we finally arrive at Iceberg Lake beneath the huge East face of Mt Whitney. After setting up camp, we grab day packs with water and head up to examine the beginning of the East Face route. We scramble up steep slopes and climb some easy sections of rock without ropes. The altitude is really having an effect. Any exertion requires big deep breaths. I wonder how it must feel at much greater elevations in Alaska and the Himalayas. After a quick look at the route, we head back down to camp. Every night we use a filter to make clean water for the next day. Almost no water source where people travel can be trusted to be clean and it’s not something to take a chance with. 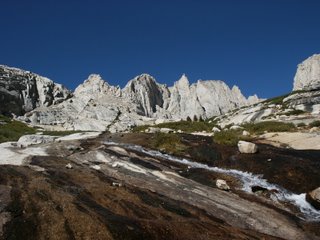 Wednesday 8/23
Iceberg Lake is aptly named. In the shadows near the edge are patches of snow that probably never melt and the wind coming off the lake is bone chilling. Today we’ll ascend the Mountaineer’s Route to the summit. It’s not a technical climb, that is, it doesn’t require ropes but still there are several hundred feet of climbing near the summit that you wouldn’t want to fall from. It’s a tough climb because of the altitude but no great obstacles to overcome. The climbing near the top is exhilarating but not too hard. It’s a large summit and we see about 20 people on top. Except for us, everyone else has come up from the Mt. Whitney trail on the West side. The Mt. Whitney trail is the most common way to the top and can be hiked in one long day in a 20-mile round trip from the trailhead. Because there’s a direct line of sight to the town of Lone Pine 12,000’ below, cell phone service is actually fairly good. A good many of the people on the summit were making phone calls to announce their arrival at the highest point in the lower 48. An uneventful descent to camp, an early dinner, and I’m in my tent by 7:00 to continue reading Sophie’s World, a very cleverly written novel that tells the history of Philosophy. I learned more Greek Philosophy on this trip than I absorbed while earning a philosophy degree in my college days. 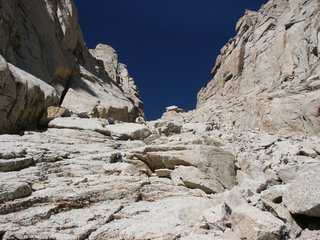 Thursday 8/24
Today we plan to climb the East Face route so we’re up early and begin the approach by 7:00. We need to be off the summit by 3:00 PM in case there are any late afternoon electrical storms. By 8:00 we’ve climbed as far as we can without ropes so now we enter the vertical realm. The first hundred feet of climbing includes a short traverse with 1,500’ of air beneath our feet where the East Face drops in a plumb line to the slopes below. We move pretty quickly and find the climbing, although exhausting due to the altitude, is easier than we had expected. By noon we are two-thirds of the way up the face and other than a couple of short sections, the hardest climbing is behind us. Near the summit we realize we’ve gotten off route somewhere and are uncertain how to proceed. Because the climbing has gotten easier though, we decide to unrope since we can climb more quickly without the rope and because we need to gain the summit while we still have plenty of daylight. Once the sun drops below the summit, which it does at 4:00 PM, the east face can become uncomfortably cold and windy. After some false starts we find the way to the summit and arrive around 3 PM. We have a short conversation with a couple who had taken 8 hours to hike to the summit on the Mt. Whitney trail. Without headlamps they could expect to be hiking the last few miles back in the dark. Another uneventful descent brings us back to camp at 5:30. Several days at altitude have killed my appetite and I decide to skip dinner in favor of a few hour of reading Sophie’s World before sleep. 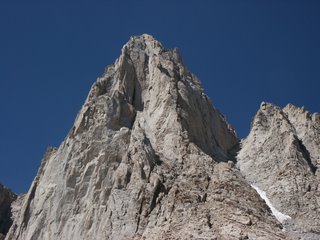 Friday 8/25
I’m anxious to leave this cold barren camping spot behind. It’s spectacular scenery but with no green in sight, it begins to seem rather bleak and the constant cold wind is taxing my patience. We abandon our plans to hike down to Upper Boy Scout Lake for the night before continuing down and instead decide to do the entire hike in a day. My 65-pound pack has to be lighter now with most of the food and fuel gone but somehow feels even heavier. The hike back down is even more brutal than the hike in. It’s less taxing on the lungs but much harder on the legs and back. It seems like an endless trip back to the trailhead but we finally arrive. I weigh my pack (which has been affectionately named ‘the pig’) once more. It’s now 55 pounds. I feel like I’ve lost nearly as much weight as my pack has. We dump our packs in the car and head to the small store near the trailhead. Food and a shower are paramount concerns. First a shower and then the best hamburger and French fries I’ve ever eaten. It’s only been 5 days in the mountains but the time concentrates ones appreciation for the simple things. 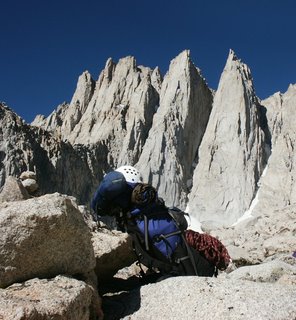 Wow!!! That is some amazing photography. Made me want to hit the great outdoors...and I'm not really a "fresh air" sorta gal. ;)
Nice post!

What a fabulous account, Tom! I can't even imagine doing something like that (with 65 pounds on your back, no less). Hope the kitty is getting better, by the way. Poor thing.

Hiya, Tom! Excellent report of your trip. Although it is a lot more than I could handle, it makes me want to get out and start taking some backpacking trips. (We just started camping like this this year.) But it's not camping season yet in TX, still too hot.

Thanks for the inspiration. Hopefully you can slim down the "pig" before your next jaunt. Ha!