Be Careful What You Wish For

Early Tuesday morning, I woke up with a little migraine, which was annoying because I had a business meeting in Richmond. I took my usual Excedrin and headed out. By mid-afternoon, I noticed my hips were feeling decidedly ache-y and the headache was getting a little worse. By the time I went to bed, every bone and muscle in my body ached.

Wednesday was even worse. The muscles in my back yelped with every footfall. I wasn't comfortable laying down, sitting up, or standing. I was running a fever (thus explaining the ache-y hips). Add to that a headache of epic proportions. I quickly caved and saw the doctor, who thought it was the flu, even though the flu test was negative. She prescribed Tamiflu but didn't tell me how to alleviate the pain (I think she thought I was weak and whining). Unfortunately, my pharmacy of choice didn't have Tamiflu in stock so they had to send the order to a different pharmacy. I didn't pick up the prescription because all I wanted to do was be in bed.

600 mg of ibuprofen helped alleviate the body pain, but did nothing for my headache. It was getting to the point where I wanted to rip my brain out of my head to make the pain stop. Seriously, it was that bad.

Fortunately, most of the aches were gone yesterday, although my back still hurts a little when I walk. I still have the headache (72 hours and counting), but it's much diminished. I managed to drag myself out of bed around 1:30 yesterday afternoon and haven't relapsed yet, so I think I'm on the mend.

I managed to make some progress last night on the second Cloning Anemone Rib sock last night and should be able to finish it today. Here's a teaser photo of the first sock: 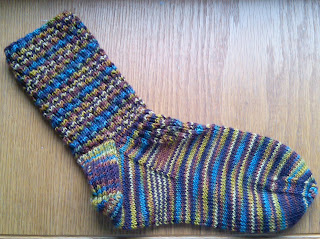 The worst part is that Tom and I were supposed to go away for our anniversary. We canceled our reservations and that makes me sad because it will probably be a while before we can go again. Tom and I haven't been away by ourselves for years, it seems. We're always vacationing with friends or his family or going to ultra marathons. The good news, however, is that we received a voucher in lieu of the deposit from the inn where we were going to stay. So we'll have to go.

In honor of our anniversary (which was yesterday), here's a wedding picture. It's hard to believe that it's been 15 years. 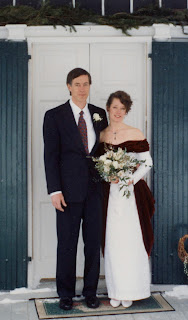 In Other News...
Verizon opened the pre-order for the iPhone4 yesterday. I wasn't in any shape to get up at 3:00 a.m. yesterday to order and by the time I got online, the web site was bogged down. I gave up (I don't have the patience to sit at the computer, repeatedly clicking a button for hours until I get in). I was up at 4:30 this morning to feed the cats and decided to give it a try. Guess what? The pre-order was sold out. Now I have to wait a week and order with everyone else. I'll be lucky to get the iPhone4 before they release iPhone5. My current phone does what I need it to, but it doesn't display pictures in email and web sites that are built using Drupal don't render at all. That's a major shortcoming. So you can be sure that I'm going to set my alarm for very early the day of public release and order.

That's it for now. I'm going to spend the day doing fiberly things and reading. For all of you in the frozen north, stay warm and safe. I envy you your snow. I wish we'd get a whopper of a snowstorm this year. I miss the amazing amount of snow we had last year.

Wait...should I have said that? Maybe I'll get what I wished for.