Not Quite a White Christmas

Every year Tom and I alternate spending Thanksgiving and Christmas with our respective families. This year, we spent Thanksgiving with his family (in North Carolina) so that meant that Christmas was spent with my family in the Tidewater region of Virginia. It also meant that we traveled for both major holidays, but them's the breaks.

For the last umpteen years, Mom has dispensed with the big Christmas dinner and opted for lots of snacks--ham biscuits, homemade clam dip, crab pate, punch, cookies, pies--and the rest of us have contributed as well. It's nice and relaxed, but can be a lot of work. This year, Dad decided he wanted to have a sit-down dinner. That's a lot of work for Mom, even if everyone brings side dishes. So Tom and I traveled down there Christmas Eve so we could help out Christmas Day.

During dinner on Christmas Eve, I noticed that the light was bothering me and sounds seemed particularly loud. I was feeling a bit headache-y and went to bed early. I woke up early Christmas morning with a migraine of epic proportions, the likes of which I haven't seen in a very long time. Fortunately, Dad made a run to the drug store to get some Excedrin (which is the only thing that works) and within a couple of hours, the pain was gone, although I resembled a wrung-out dishcloth. Tom helped Mom with dinner preparations. The family assembled at 4:00 instead of 2:00 and the Christmas celebration was saved.

After dinner, gifts were distributed to the children and that was a lot of fun. Christine (age 9) has been knitting with a knitting loom and wanted to learn to knit with needles (she also wants to learn to do cross-stitch and embroidery). My gift to her was a nice bag filled with yarn, a learn-to-knit book, knitting notions, a book of knitting loom patterns, a cross-stitch kit, an embroidery kit, and a punch-loop kit. She was thrilled. Christine is a knitter. She mastered the knit and purl stitch easily, then went on to stockinette stitch, seed stitch, and ribbing. But the one thing that makes her a real knitter? She wanted to start a second project but had only one pair of needles. Instead of finishing the project on the needles, she started her second project using chopsticks for needles!

My 15-year old niece, Shauna, also had asked me to teach her to knit. Her gift was a pair of knitting needles, two balls of yarn, and knitting lessons. She, too, picked up the knit stitch quickly and was well on her way making progress on a garter stitch scarf. Then she had a knitting accident after she got home and lost her work. Do you know how hard it is to explain casting on and knitting using text messaging? It will be interesting to see if I explained it well enough for her to correctly form the stitches. If not, we'll have created a new art form.

However, the best Christmas gift (for me at least) was the snowstorm that hit Tidewater Christmas night. It started snowing around 8:00 and snowed all day Sunday. Tidewater doesn't get snow. When I was growing up, most snowfalls were about an inch. I think we got six inches one year and that was very exciting. But Sunday's snow? Thirteen inches!! Tom wanted to leave Sunday night, after it stopped snowing, but it would have taken forever to get home. Fortunately, the roads were clear today and traffic normal. As it turns out, that was the third largest snowstorm on record for the area.

Of course, snowstorms bring enforced knitting time and I was able to finally finish the second Vancouver mitten (the first was finished during the Olympics last year. Here's the pair: 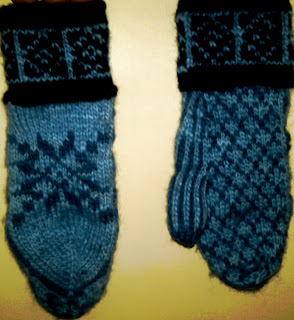 That's it for now. I hope everyone had a lovely holiday.