Well, it seems that I fell off the face of the Earth in December. Even though December happens every year, I always am caught unawares by it. For some reason, this December was worse than Decembers past.

The Christmas shopping didn't commence until the week before Christmas; I did most of the Saturday before. There was Christmas knitting and Christmas knitting that was started way back in May. Was it completed in time? Nope. I did, however, finish a sleeve and I took that down to my parents' for Christmas. My little niece (age four) was entranced: "Look, it's my sleeve!" Given that the girls are growing so fast and my progress on the sweaters is proceeding more slowly than a snail moves in the snow, I took measurements again to make sure that I didn't have to go up a size. I needn't have worried...Debbie Bliss sizes her garments so generously that I could probably get the both of them in one of the sweaters this time next year.

The other Christmas knitting was a scarf for Tom. This project was the early morning stealth knitting about two weeks before Christmas. I got up early Christmas morning, nicely arranged the scarf in a box (still on the needles and complete with the extra ball of yarn), wrapped it, and put it under the tree. Tom's reaction when he opened it: "I got a knitting project!" I was hoping that that would pique his interest in learning to knit, but no luck there.

Social obligations have also been a bit heavy this month, which took me unawares since December started with nary an invitation. By mid-month, we were pretty busy. And it looks like the partying is going to continue through mid-January. A New's Year Eve dinner party tonight, the nephew visiting next weekend, my company holiday party the following weekend, and the project holiday party that Wednesday. Sheesh! A serious diet and exercise program is going to be in order soon as the weight is creeping back on.

Emma is doing quite well and is quite the queen of the household. She has learned that the kitchen counters are an easy jump and it's been a challenge to keep her off. We've switched her to a raw food diet and she absolutely loves it. I'm not making it myself, but am using Aunt Jeni's Homemade 4 Life. To read more about a raw food diet for cats, click here. After losing Jezebel to cancer on Labor Day, I've decided to go with a natural and holistic approach to cat care. We're very fortunate to have a veterinarian in the area who does acupuncture and is in the process of becoming certified in veterinary homeopathy.

Another activity that is cutting into my blogging and knitting time is running. Tom has been running with the Loudoun Roadrunners on weekend mornings. In an attempt to get back into some semblance of shape (and see if my ITB problem has resolved itself), I'm joining them. At first, it was only on Sundays. Now it's both days. The runs through rural Loudoun County are gorgeous, not to mention challenging. The real time killer, though, is going for post-run coffee. By the time we get home and cleaned up, it's after noon. And I usually forget (gasp!) to take my knitting. Henceforth, my knitting will go with me on runs and I'll boldly knit in public, and proudly.

New Year's Resolutions? I'll reserve that topic for tomorrow's post. Suffice it to say that one of them will involve being a more frequent blogger! 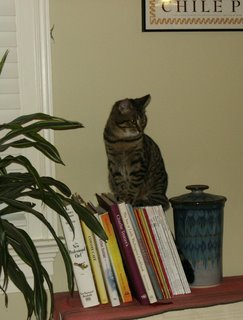 May the New Year hold good health, happiness, prosperity, and lots of fibery goodness for you!
Posted by Teri S. at 7:05 AM 3 comments:

This has been a very strange week for me. I worked from home on Monday because we had to go to Baltimore for my grandmother's viewing that evening. We met my parents at the home of their longtime friends, the Henschens', then went for an early dinner to The Bowman. The food was decent, and the experience was definitely "Bal'imer," complete with the hostess calling folks "Hon" as she seated them. Tom had the sour beef and dumplings (known elsewhere as sauerbraten) and I had the grouper Italiano. I think the best dish was Mom's Roughy St. Michael. It was good to see Mr. Bob and his wife Sue again, and to hear Dad and Mr. Bob's stories of when they were in the Navy together (back in the '50s). Then it was off to the viewing.

I was pretty nervous about the whole viewing and funeral thing. I don't handle grief well and I tend to absorb everyone else's grief as if it were my own. But I must say I did rather well. My grandmother had a lot of friends and even the children of her friends came out, as well as relatives. Even my mother's childhood Sunday school teacher stopped by, with members of the Order of the Eastern Star, who did a nice service.

The funeral was Tuesday afternoon, and most of the people who came to the viewing attended the funeral. Grandma had always requested that Pastor Yost, her favorite pastor, officiate at her funeral and he did. He told stories of her working the church suppers and how she liked to tease him. It occurred to me, then, that I really didn't know my grandmother well at all. My grandfather died in mid-'60s and she was always very sad after that, especially at holidays, which is when we saw her. So my most prominent memories are of a very sad grandmother, not a fun-loving grandmother. It was so good for me to hear stories of Grandma from people who knew her better than me. I wish I had taken the time to go beyond what I saw and get to know my grandmother better.

It was sad, too, knowing that the next time I see most of these people again will be at their own funeral, as everyone is getting up there in years.

There wasn't a gathering after the funeral, but Mom's friend Miss Beanie suggested that we go out to lunch at the Olive Garden (which in my opinion, isn't that good). Unfortunately, the Olive Garden doesn't have crabcakes, which I was craving. Donna (Miss Beanie's sister) suggested Pappas. We all ordered the crab cake platter and I think it was the best crab cake I've ever had. It was full of backfin, and very little filler. It was lightly seasoned so the crab wasn't overwhelmed. So, if you find yourself in Bal'imer and craving a crab cake, head over to Pappas. You won't be disappointed!

So what was strange about the week? It was the meeting of two cultures, I guess, that of mourning, and that of normalcy. I felt that my perspective shifted during the viewing and funeral. It didn't shift a lot, but enough to throw me off for the remainder of the week. I think I'm back now, but still have that lagging behind feeling.

Emma Update
Emma has fully integrated into our household and now has run of the entire house. She has discovered the bed and the large, warm cat toys (us) that inhabit it every night. Needless to say, we haven't gotten very good sleep. When she isn't pouncing on us, she's trying to sleep between the pillows, which greatly bothers Tom. So I'm sleeping very lightly in an attempt to keep her away from Tom. It's not working very well. And there are times when I have to banish her from the bedroom because she gets too riled up.

Tom broached the subject of getting another cat last night, to be a companion for Emma. He thinks she's lonely. I'm not so sure about that. How does one tell if a cat is craving companionship?

Knitting News
There's not much to report here. I made some progress on the Spirit Trail sock on the drives back and forth to Baltimore and have only a short length to go before I start the toe decreases. I have not touched either of the girls' sweaters and can officially declare myself screwed for completing these by Christmas. I might be able to finish them if I knit 12 hours a day for each day remaining in December. Henceforth, I will knit only on the sweaters and one other Christmas present. I will knit on one sweater every morning, the other Christmas present at lunch, and the other sweater every evening. And if I'm really, really lucky, I might complete one sleeve for each sweater by Christmas morning.
Posted by Teri S. at 8:59 AM 2 comments: