Just before we left for the beach a week ago, Tom's San Francisco Marathon time became official. Yippee! We don't know why his time wasn't transferred from the unofficial list; perhaps it was one of those ubiquitous computer glitches.

This year's beach trip was a bit odd. It was very hot and there were a lot of biting flies. Most of the beach time I logged was during my morning walks, with about an hour on the beach the day my nephew visited. The ocean, however, was cold, and the water was crystal clear. The other thing that made it a bit odd was that a fair number of family couldn't make it this year. All of Tom's nephews were missing, as well a sister-in-law and a brother-in-law. That made for a quiet house. As usual, most everyone stayed immersed in their books all week, with my mother-in-law being immersed in her jigsaw puzzles. I, of course, was immersed in my knitting. As a result, I have two finished objects!

The Trekking socks are done: 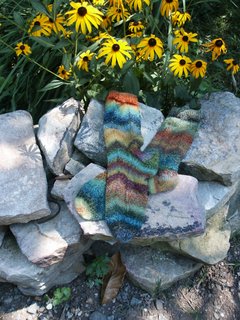 As is the Rasta Colors hat: 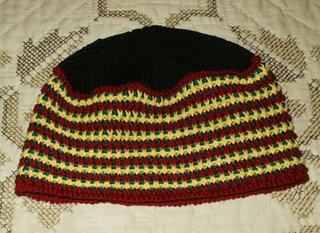 I think I've set a PR for the most FOs in a single week!

I made some progress on the Milanese Lace scarf, but ended up tinking as much as I was knitting. It is not a good car project.

Adventures in Quilting
As soon as we returned home, I started on the baby quilt project. Now, you must remember that I have an aversion to math and am somewhat challenged by geometry. What is a quilt but fabric formed by math and a whole lot of geometry? I spent a good part of last Saturday designing the quilt (block pattern: Our Village Green) and figuring out the yardage. I have no idea if my yardage calculations are correct. If I run out of fabric or have too much left over, they weren't.

This is the fabric: 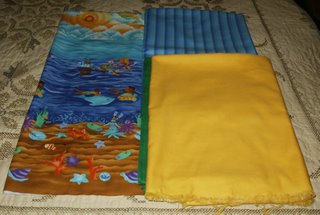 The ocean scenes will be cut into 6-inch squares (plus seam allowance) and will be surrounded by alternating triangles of green and yellow. The striped fabric will be the quilt back and edging. I'm not sure about the green and yellow for the triangles and might end up using different colors.

I spent Sunday trying re-learning the concept of quick cutting and getting my head around the idea that the seam allowance for the points at the longest edge of a triangle is 5/8", even though the seam allowance is 1/4". Therefore, the only cutting that happened was straightening the fabric in preparation for cutting.

I plunged in full force Monday night and created the grid needed for the half-square triangles. How hard is it to create a grid of vertical, horizontal, and diagonal lines? Harder than you'd think. Most of my time was spent staring at the diagram with a perplexed look on my face. So, which way does the grain run? How many squares do I need? How is a fat quarter cut? Do I draw the diagonals on every square or every other square? I left the task unfinished.

Tuesday night produced a completed grid and the sewing machine. I've sewn before. Back in the day, I had no compunction about buying yards of fabric, taking scissors to it, and creating a neo-medieval gown without using a pattern. I can sew, although I don't sew all that well. So I was a bit puzzled when I couldn't remember how to wind the bobbin (read the instruction book), or which presser foot to use. I used presser foot 4 because it was small; I knew that I had a quilting foot that would produce 1/4" seam allowance. I put the foot on, set the stitch type to 4 (you know, to match the number on the foot), moved the needle to the far left position, and pressed down on the accelerator pedal to bring up the bobbin thread.

Imagine my surprise when the needle exploded. I sat there, stunned. I reached for the instruction book. Note to self: Don't use the zipper foot for quilting and don't use the zigzag stitch.

This is going to be an interesting project.
Posted by Teri S. at 6:59 AM

Oof, sorry about the needle! Good luck with the rest of the project! Your FOs look great!

Sounds about right...I used to sew quite a bit and was horrified by my lack of ability when I pulled out the machine this summer after a lengthy hiatus. It is starting to come back, but sheesh, what a lot of wasted fabric. I've yet to blow up a needle, though. Kudos!!! ;)

Good luck with the quilt. I'm working on a baby quilt for my SIL's newborn and realized (since I try to be smarter than the pattern, sometimes) that I only bought half the yardage I really needed. Urgh.

The socks & hat are amazing! Good luck on the quilt (I'm with you on the math).