Whew...what a weekend! San Francisco was gorgeous, Tom ran a great marathon, setting a PR at 4:10:45 (more about that later), and there was even some stash enhancement at Art Fibers.

We spent a lot of our time walking around the city because we didn't have a car. Walking is such a good way to see a city and absorb its essence. It brings the city down to a human scale and makes it possible to notice details that you wouldn't have whizzing through the streets in a car or on a bus. And no, we didn't take any cable cars.

We did, however, go to the Farmers Market on the Embarcadero on Saturday morning. It was spectacular. They were celebrating peaches and there was definitely cause to celebrate. There were so many varieties of peaches and nectarines and plums and they were all good. So juicy and so sweet. I sampled everything I could and was very sad that we couldn't bring anything back. 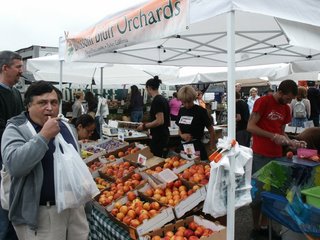 All the vegetables were gorgeous and everything seemed to be organic. Mushrooms...they had so many different varieties of mushrooms. 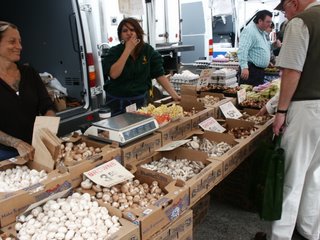 Breads...to die for. Cheeses made from raw milk...outstanding. Cured salmon and salmon jerky...delicious. Flowers...gorgeous. That market made me want to pull up the stakes back east and move to San Francisco.

The restaurant options were also outstanding. To say that San Francisco has a lot of restaurants is an understatement. It was hard to choose from all the many restaurants. Friday night we ate at Greens, a vegetarian restaurant located in Ft. Mason. We sat by the window and looked out over the marina and the bay, with a view of the Golden Gate Bridge. As we were waiting for dinner to be served, I noticed this large ungainly fish slowly swimming near the building. I had never seen a fish that large...wait! It's a seal! I saw a real live, non-zoo seal! That was very exciting. Later that evening, it swam back into the marina. I took that to be a good omen for our trip. The food at Greens was delicious; if you have a chance to eat there, please do, even if you aren't a vegetarian. You won't even notice the lack of meat. We had planned to have an early dinner on Saturday in the North Beach district, which is full of small restaurants and cafes. Much to our surprise and dismay, most of the restaurants already had a wait and that was at 6:00! So we ate here instead. Cafe Zoetrope is owned by Francis Ford Coppola. The food was okay, but the building was very cool. Unfortunately, we didn't sight Francis, although there were hints on Sunday afternoon that he might show up. If he did, we missed him. 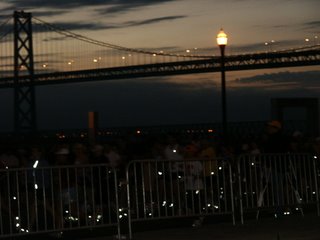 and went back to the hotel for a quick shower. My breakfast plans were thwarted, since the place I wanted to eat didn't open until 10:00, which would be about the time Tom would be crossing the finish line. Since I had a couple of hours to kill, I took some photos, watched the winner cross the finish line (in about the same time it takes me to run a half marathon), and got to knit in public for a bit. Tom was running with the 4:10 pace group and my heart sank when the pace group leader came in, but with no Tom in sight. A few minutes later (which seemed like forever) he came in: 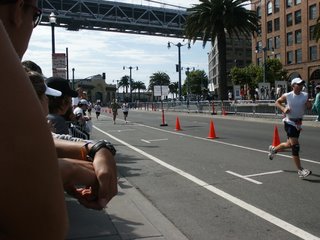 (Click the photo to enlarge it; Tom is in the green shirt, second or third one back.)

As usual, he thought he did terrible. He dropped the pace group around mile 20 or so. Since we didn't have access to the Internet, we couldn't look up his time. My parents came to the rescue later in the afternoon and said that his time was 4:10:45, which was better than he thought (and it was only 45 seconds off his goal time). When we got home last night, he checked the official race results. He wasn't there. He found the unofficial race results and his half time is missing, even though he crossed the half mat with the rest of the pace group. Because of that, it seems that he was disqualified. He ran his best time ever and because of a technical problem, was probably disqualified. He has written to the race director, and I think he should protest. He has witnesses that he crossed the half mat, since he was with the pace group at that time. It's heartbreaking. I feel like he's been robbed. He trained so hard for this race and was so psyched about running it. It seems so unfair.

To celebrate his accomplishment, we had dinner at Town Hall which was recommended by one of Tom's friends. It was within a good walking distance from the hotel, although when we went looking for it on Friday, we went the long way 'round, since we didn't know how the blocks were numbered. The food was excellent, the wine very good, and the dessert? To die for. We shared a butterscotch and chocolate pot de creme. Yum YUM!

Other highlights of the trip include wandering through parts of Chinatown (although the parts we saw on Saturday were touristy), and a trip to Artfibers where I bought a small quantity of Alfabeto (a silk/mohair blend) in color 6. If you buy yarn, they'll interpret your design into a pattern for free. I took advantage of that service, but feel a bit guilty because I should be able to write out my own pattern. It feels like cheating somehow. We'll see how the pattern knits up and if it ends up looking like what I imagined.

We also visited the Hass-Lilienthal House which was a rather long walk from the hotel. The concierge recommended taking a cab, saying it was too far to walk. It was only about 13 blocks. The bonus was that we got to see the non-touristy parts of San Francisco. The house is beautiful and the tour guide was very knowledgeable, given that he is a restoration carpenter and furniture maker. It was interesting to see elements that were similar to our house, although our house is on a much smaller scale. We learned a lot about the local building materials of the era, as well as cost-cutting measures for homebuilding (faux graining on redwood instead of using more expensive white oak, for example). This house was a middle class house, and it puts our middle class houses to shame (not to mention that they had staff; I'd like to have staff). This is an exterior view of the house: 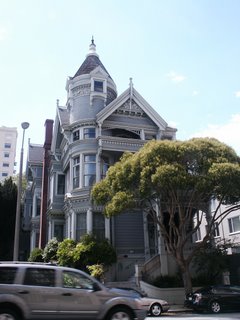 I used to think that I'd like to live in that era, but I suspect that I'd find it too restricting. They didn't have a yard or garden and I don't think I could have been happy not going outside. Of course, if I was raised that way, I probably would have been somewhat content. We'll never know, will we?

The walk back took us through Chinatown again, but this time it was deep into Chinatown, through the residential areas and the non-touristy shops. Of course, we had no idea what anything was because the signs were all in Chinese, but it was fascinating. As we walked past one alley and glanced in, we saw someone practicing being a Chinese dragon. He was wearing the dragon head and weaving it around, opening and closing its eyes and mouth. I didn't get a picture; it seemed somehow wrong. But it was a beautiful thing to watch and the dragon head was so pretty.

It's good to be home although I'm definitely wanting some San Francisco weather. The high temperature for the weekend was on Sunday, when I think it got into the 70s. All the rest of the time, it was in the 60s, which was a little chilly, but refreshing. And now that we're back, we're facing temps of close to 100, with the heat index much higher than that.

Tomorrow we head down to the Outer Banks. Given that the weather there is just as hot here, I don't think I'll be getting a lot of beach time. Way too hot. My little tootsies will be scorched walking down to the beach.

One Skein
I sent the second package off to my secret pal. This is what it contained: 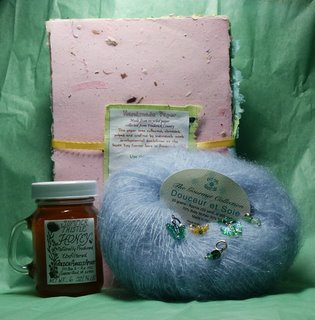 A skein of Douceur et Soie, some local honey, some handmade paper (not by me), and a few beaded stitch markers. My pal said that she loves knitting with Douceur et Soie, but has not seen the periwinkle color before. I'm still enjoying doing this exchange. It's fun to try to figure out what my pal's likes and dislikes are and then find the appropriate items. I'd really like to spin some yarn for her, but my spinning isn't good enough yet.

Knitting Progress
The second Trekking sock is almost done. I finished turning the heel on the flight back yesterday and while it isn't going to be finished today (the end of the knit along), it's close. No more progress on the Rasta Colors hat, although that will be a beach trip project and the scarf for my pal is getting longer. I'm still not happy with the edges, but it's probably too late now. Because it's essentially stockinette stitch, the edges are curling in. Maybe I'll have enough yarn to do a small crocheted edging. I like the lace pattern; I just don't like the edge. It's clearly a novice's lace project.

Well, that's about it for now. This post turned out to be longer than I expected. A bit long-winded, actually.

Next time, a Stitches East class preview. I registered by 1:00 on the opening day of registration and I got my third choice for Thursday afternoon and my second choice for Friday. But regardless, it should still be good.

Time to do more laundry! Have a great week and stay cool, wherever you are!
Posted by Teri S. at 1:57 AM

Ohhhhh, I lurrrrve San Francisco! It's my favorite US city, and your "tour" was great to read -- makes me want to go back there right now (especially with their cool summers).

Years ago my brother and I visited San Fransisco and it has remained one of my favorite trips ever. (also one of the shortest, sadly... Still, it was a fabulous city!) Too bad the good came with the bad in terms of Tom's race. Hopefully that can be resolved. One would think that there would be a more effective system in place for so large an event! Still, a personal record is nothing to sneeze at.

Good luck readjusting to the tropical temps of the eastern half of the country. What the heck is going on here????

What a great recap! It sounds like you and T. had a great trip and got to enjoy some of the less common parts of the city - the neighborhoods.

Sorry to hear about T.'s mishap with the marathon. I agree, he should protest. Especially if it meant so much to him.

You're so kind... I would've totally taken a picture of the Chinatown alleyway and the practicing dragon. But even without it, your description is lovely.

Glad you had fun in SF-- sounds like it was really a great time. This city rarely disappoints in the food and bev department ;)
Thanks for the encouraging words about my 1/2 marathon run, by the way!
Sorry to hear about your husband's race timing thing-- maybe it was a computer glitch that will get worked out? Especially if many people had that happen.
Well, and, at least all the people that matter (you, him, your friends) know his time is for real.