It's Coming From the South 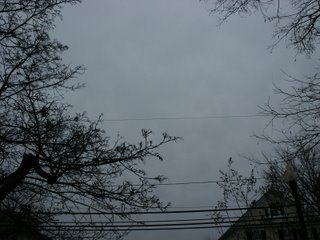 It looks like a snow sky! And indeed, the National Weather Service is calling for a bit of the white stuff today, mostly after 4 p.m. Unfortunately, the accumulation is supposed to be less than an inch. And they're calling for a mixture of snow and freezing rain tonight. However, the low pressure cell is coming from that south and historically, that means big snow. Sometimes, however, the big snow is farther east than Leesburg. So, it's time to put on my snowflake earrings and do the snow dance and hope for way more than an measly inch of snow. At this point, however, any snow will do.

There's also a chance of snow (or rain) on Wednesday night and Thursday. Woohoo! To the snow, I say "Bring it on!"

Progress!
I've completed another half repeat on the Jenna sweater, for a grand total of 50 rows and 5.75 inches (out of 12.75). It's slow going, but the knitting is beginning to flow. Emma was mostly good this morning and I had Tom to help keep her away from the plants. And she even sat on my lap for a little bit and didn't seem to be too interested in the knitting. And that's a very good thing!

After much contemplation, I decided that it's probably not a good idea to start that sexy little lace number, no matter how much I want to. Just check out the WIPs and the UFOs section in the sidebar. Bad news. I really should start working on finishing some of my current projects, don't you think?

Victorian Lace Today should arrive tomorrow and the temptation to cast on for a shawl is going to be immense. Must...complete...current...WIPs...

Something Yummy
The other night as I was digging around in the refrigerator trying to figure out what to fix for dinner, I came upon a container of mascarpone cheese. Hmmm...better use it before it goes bad, but what to do? A flash of inspiration...add it to spinach! Here's a recipe for a very quick and tasty creamed spinach:

Put the frozen spinach in a pan over medium heat. While the spinach is cooking, heat the olive oil in a small saute pan. When the oil is hot, add the onion and garlic and cook until the onion is soft. By this time, the spinach should be thawed and most of the water evaporated. Add the spinach to the onion and garlic mixture and cook until all of the water has cooked off, stirring frequently. Add the mascarpone cheese, and salt and pepper to taste. Serve immediately. This recipe serves two.

A Milestone
Early Friday morning, I became a great-aunt. Tom's nephew Martin and his girlfriend Veronica had a little baby girl, Sylvie Elizabeth. Mother, father, and baby are doing fine.

What's that, you say? What did I knit the wee one? Nothing...yet. I couldn't stand the thought of making another baby blanket, so I think some booties and a knitted stuffed animal are in order.

Truth be told, though, the idea of being a great-aunt is a bit troubling. That means the nieces and nephews are growing up. And that means I'm getting older. Well, duh, no kidding. But in my mind's eye, I still picture the kids as...well...kids, not young adults and certainly not young adults old enough to be having children of their own.

This could be the beginning of a mid-life crisis. Maybe I should start knitting that sexy little lace number after all! 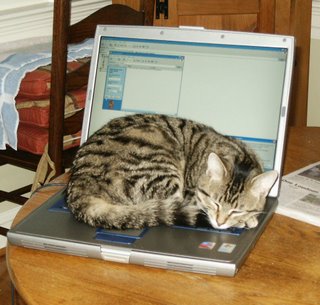 Afternoon Update
Hahahaha! It's SNOWING! The snow started around 12:30 with eensy-teensy flakes (always a good sign). It's been snowing steadily for a couple of hours now and the snow is beginning to cover the grass. I'm so excited! The snowflake earrings worked!

There's something about a snowy day that makes me want to stay inside and bake. Bread, cookies, cakes...it doesn't really matter. Alas, I did my baking yesterday, turning out some lemon biscotti (delicious) and Amish Friendship Bread (a bit rubbery, according to Tom). I'm out of flour, too, so there's no baking this afternoon. But there will be soup-making, as soon as Tom goes to the store to get ingredients.

I think everyone should take a holiday when it snows. You know, suspend the usual house chores and going to work. Slow down, and appreciate the peace and beauty of the snow. Revel in the silence. There's nothing better than waking up after a snowfall and all the normal sounds are muffled. 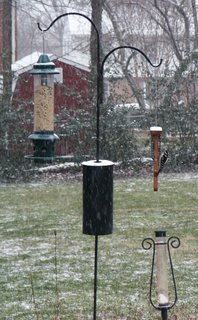 Your weather report sounds a lot like mine, except I'm a bit farther north! I agree, Bring it on! Your cat is adorable sleeping there on your keyboard. What a cutie!

How funny...my staff and I were just talking about making biscotti on Thursday. We are all fans of the chocolate, though.

Congrats on great-aunthood. I'd say that rates a day off even if the snow doesn't quite do it for you. I'm starting to think that we well never see any significant snowfall up here. At least I'll get out of school earlier this year.

Yay! I'm glad you got some snow, finally! I always feel like baking when it gets snowy/icy out, too . . . I think because my mom used to always make bread on snow days.

And Emma? Awwwwww! She's so cute!

YAY! Snow! We had some in Chicago, too, right in time for the Bears game.

I love the photo of catnap-laptop.

Yeah, I think the weather guessers where off on this on. The snow started way early. It was snowing up in Frederick by 1:30. I figure that we only got about an inch and it was wet. We only saw a little bit of the freezing rain but it was late at night.

I am thrilled to hear that there may be snow for Thursday. I don't want it on Wednesday because I have to drive over to Westminister. Thursday is my birthday and I want the snow on my birthday.

ps - I forgot to say that I love the kitty computing photo ;)