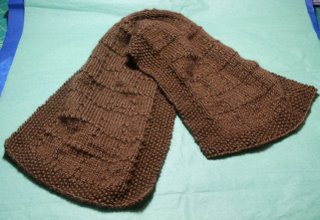 Even though I enjoyed knitting this scarf with this stitch pattern, there are some things that are dreadfully wrong with it. First and foremost, it's only a mere 30 inches long, which far too short for Tom. It's barely long enough for me. I also had some difficulty following the stitch pattern and realized the mistakes only after knitting far too much to rip back (or so I though at the time). So I did what any lazy enterprising knitter would do and incorporated the mistakes as design elements. This would have worked swimmingly, had it not been for the fact that the scarf was way too short. The scarf is destined for Frog Pond and a reknit and probably a slight redesign (decreasing the width and improving the transitions from seed stitch to stockinette).

I'm pleased with the way the Jenna sweater is coming along. 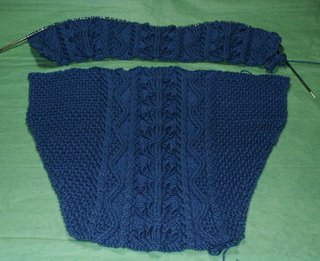 The only part of the pattern that makes me want to run from the room screaming is the bobble motif. And it's not the bobble making that drives me crazy. It's the working the CR2L and CR2R on both the right side and the wrong side. It really slows things down. But I'm persevering and have completed almost half of the second repeat.

I made no progress on the Christine sweater yesterday. The sleeve remains where I left it, waiting for an increase in pattern.

I stare at the sleeve, I stare at the chart, I ponder my options. I'm coming to the conclusion that I'm going to have to sit down with graph paper and chart out the increases. While I'm sure that I'll learn a lot from that exercise, there's a very good possibility that I'll copy the chart wrong, no matter how many times I check it. The goal of having the sleeve completed by the first weekend in February seems unattainable.

I did, however, finalize the plans for my parents' 50th wedding anniversary celebration. That took a fair amount of time, but other than planning the food, it's mostly complete.

After a hopefully brief excursion to the grocery store and a quick housecleaning, I plan to be able to make more progress on the knitting front. And perhaps, just to fulfill yesterday's horoscope, I'll cast on a new project. That sexy little lace number, perhaps. Like I really need another complicated knitting project.

Someone shoot me now. 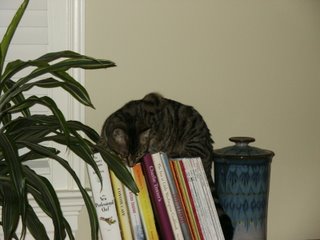 Back when I first started up the knitting again I used to tell myself that every mistake was a lesson learned. This was supposed to make me feel better about the trips to the frog pond... Bye scarf!! Thanx for the life lessons! ;)

I love that sweater! I think it'll end up being worth the bobbly, cabley stuff in the long run.

I'm inspired by the kitty and I think a nap might be in order now.

I love the Jenna sweater....great color.

Sorry about the scarf. Bummer.