I couldn't stand it any more. I was not going to let a knitting technique get the best of me. I grabbed my practice swatch and tried again. Behold! 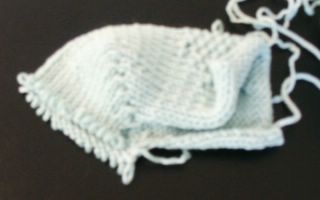 No gaps! There's a trick to this. When knitting the increases, you knit or purl the first stitch of the pair. Correct the stitch mount, if necessary, of the next 2 stitches and K3tog or sssp, then turn and yarn over. What is left on that needle will be a set of paired stitches, a single stitch, and another set of paired stitches (sorry, no pictures). Had the instructions for the YO short row method mentioned that, I wouldn't have had gaps.

Now I had a dilemma. I know what the results should be--should I simply ignore gaps so big that you could drive a Cooper Mini through them? Or should I frog the sock one more time? After much gnashing of teeth and waffling back and forth in true Libran style, I decided to frog it. Once again, the Sock of the Caribbean is no more.

To assuage my grief at having to frog hours and hours of work, I decided to pull out the spinning wheel and spin. It was just what the doctor ordered. What is it about spinning that soothes the soul? I felt something akin to joy at seeing a fluffy mass of wool turn into a smooth (albeit over-twisted) yarn. It was very satisfying. After spinning, I worked on the Fern Leaf shawl some. And then, the knitting goddess exacted retribution, probably because I was feeling confident in the pattern. So now, here I sit, ready to knit across the WS, but I'm on the RS. Gar! I think I'll return to sock knitting.

In cooking news, the August Gourmet features a peach blueberry cake on the front. It looks delicious! So, that will be tonight's dessert. There is a little farm stand set up on the corner and they have peaches, so I bought just enough for the cake. Everything was going well, until it came time to halve the peaches and remove the pit. I sliced a peach in half and gave it a deft twist to separate the halves. The halves remained firmly attached to the pit. What ensued thereafter was quite ugly, involving much bad language and stomping of feet civil, involving much cajoling and gentle persuasion. The peaches finally relented. They are slightlyvery mangled, but they are separated from the pit and are now quite happily baking in a moderate oven for a long time.

Jez, however, was nonplussed. 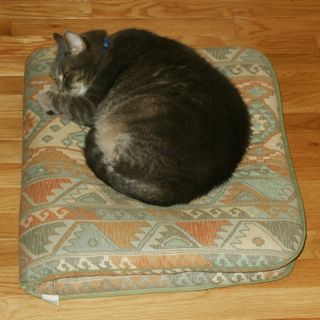 YAH! I knew you could do it! Now, want to do the magic-two-socks-at-once, one-inside-the-other game? LOL Why do I do this to myself? Since I finished the pair I mentioned a few days ago, you can see them on today's post if you like. www.ccrfuzzy.typepad.com C'mon, you know you want to do two at once. :)