Knitting on the Rocks

Today's Extreme Knitting theme is on the rocks and in the air. Judy took her knitting with her on a vacation to the Badlands. Her son took the sock on a hill-climbing escapade. Here he is, with sock, after achieving the "summit": 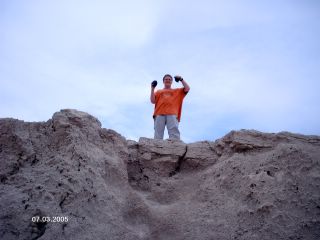 Barbara took her sock on a rock climbing adventure to Table Rock in Linville, North Carolina. Here she is, between pitches,
getting in a few rounds: 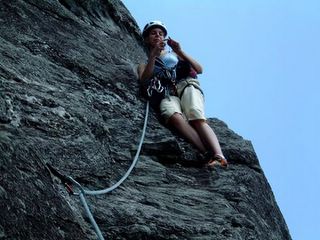 Barbara didn't identify the route or its level of difficulty. But I'm pretty sure that it's a first ascent by a sock.

So now we leave the earth behind, with our first aerial entry: 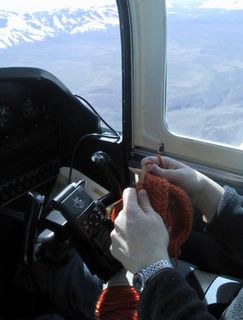 Those are Amanda's hands, knitting a bag for her sister while flying in a small plane from Oregon to Florida this spring. She's over the Idaho/Utah border, at more than 11,000 feet. It looks like she's in the co-pilot position. Now I'm wondering...who took the picture? Was it the pilot? Does the plane have an auto-pilot feature? So, Amanda now holds the highest altitude record. Margene, however, still holds the earth-bound high-altitude record.

Hmmm...I wonder if any of the astronauts knit. Wouldn't it be something to have a picture of someone knitting in space?

Thanks for all of these week's entries! It's really great to see all the places where our knitting goes.

The Interview
Yesterday was interview day. I met a friend for lunch, then drove up to Rockville. This meant navigating the infamous Capitol Beltway, aka 495. My heart sank as I entered the on-ramp...and stopped dead, at 1:30 in the afternoon. It's way too early for rush hour traffic! It didn't help matters any that it was raining. However, traffic slowly moved and I arrived just a few minutes late. I could tell I was getting into the commuter mentality when I thought that 45 minutes wasn't too bad.

I talked to about 11 people, including the CEO and CFO. The interview took five hours and went very well. They had expected it to take about two hours. I asked a lot of questions, which is unusual for me (I usually freeze up in interviews). And surprisingly, I wasn't exhausted at the end. I was energized. I was still energized after the drive home, which took exactly one hour (through gorgeous western Montgomery County).

The job would be very challenging. It's in a space I don't know well and I definitely don't have the hard technical knowledge, given that I don't know anything about how computer networks work at packet level. But it will give me a chance to further hone my management skills. And I am as passionate about providing excellent customer service as I am about helping to create high quality software.

My biggest concern isn't my ability to do the job. It's the long, potentially stressful, hours and the long commute. There's a possibility of telecommuting a couple of days a week and pretty much everyone works flex time, so that will help somewhat. I'd be going against traffic and the commute route right now isn't congested. But that's still a whopping two hours of driving a day.

However, I don't have to make a decision right away because we're leaving for a week at the beach with Tom's family. I can mull over it while I'm sitting on the beach (slathered in high-octane sunscreen and under an umbrella, of course), listening to the sound of the waves breaking against the shore.

If you submit an Extreme Knitting Challenge entry this week, don't worry if you don't hear from me. I'll collect them up and post them next weekend.

Yes, my husband (the pilot) took the picture. We do have an auto-pilot on the plane, but it won't fly a course for you, it will only keep you level (while you do something like take a picture of your knitting wife). We compare it to cruise control. If anyone is interested in how you fly across the country (with a two year old!), our trip blog can be read at: http://www.livejournal.com/~n9981u/

Hey does that mean they offered you the job??? congratulations even though you may decide against taking it. You still deserve a big round of applause for going to one interview (of a 5 hr duration) and coming out with an offer!!