Whew! What a weekend! It was productive, but productive with "me" time. I finally got my butt out and ran with the club, which was followed by breakfast at Patrick's house. He competes in triathlons and it turns out that his wife used to be a competitive ski jumper for the US Ski Team and did all those cool aerial tricks. She doesn't compete anymore (one, the weather here is not conducive to it) because her knees and hips are shot.

Yesterday I headed up to Funkstown to Y2Knit for the July 4th (and 4th anniversary) sale. Was I good? Was there stash enhancement? Only my hairdresser knows for sure! Suffice it to say that Susan has some pretty good deals.

While I was browsing the yarn shop, Tom saw You Kill Me. He thoroughly enjoyed it, even though he had to leave Leesburg to see it. After we both returned, we met Leigh at our favorite watering hole. As it turned out, several running club members also showed up. We had a good time trading stories and sharing wine. At the end of the evening, Jerry (the bartender) gave Leigh and I blueberry martinis, fortunately small ones. They were quite tasty, but it put me over the edge. I woke this morning feeling less than stellar. So I took the opportunity to work on...

Ravelry
I started entering my stash last weekend. Or was it the weekend before that? Regardless, my fiber room looked like it suffered an explosion: 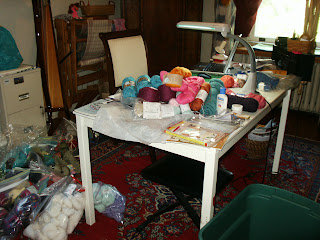 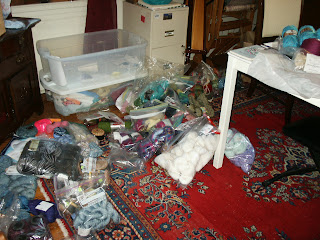 It was getting to be a rather annoying, stumbling over the piles of yarn. During the endeavor, I learned that Emma has developed a liking for wool and wool/silk blends. I'd leave the room and when I returned, some of the yarn had mysteriously moved to the floor. The first time it happened, I assumed that I had unknowingly knocked the yarn off the table. But no...it was Emma. She'd jump on the table, pick out particularly nice skein of yarn, and carry it off (just now she chose the Adrienne Vittadini Martina over the Provence cotton). At least she has good taste.

But finally, after working in Ravelry all day, all the stash is entered. The bonus is that the stash is organized. I've got the yarns slated for shawls and socks in one bin and all the other yarns in the other bin, further sorted by weight and fiber content. So it should be a lot easier to find what I need. It doesn't hurt that you can enter the location of the yarn in Ravelry, either, particularly if your stash spans several rooms (mine doesn't; it spans two bins).

After I finish getting the room organized again, I'm going to work on finishing spinning the Rambouillet from the Wooly Wonka Fibers Exotic Fibers Club. I think the next shipment comes this month and I'd like to be prepared to start spinning it without having to buy additional bobbins. I also need to start finishing the many UFOs I've got. My idea of not starting a new project until I finish one old project quickly went by the wayside. Sigh...so much knitting and spinning, so little time...

Secret Pal 10
Secret Pal 10 ended at the end of June. My giftee was Toni, over at Fat Chick Crafts. It was a lot of fun to get to know her and see the amazing work that she does. In addition to knitting, she stitches. And I was horribly mean and gave her a CD drop spindle and a wee bit of roving. Bwahahahaha! Despite hiding it deep in the closet, she started spinning and ended up buying a real spindle and roving the very next day. I'm so mean.

My gifter remained very anonymous for the duration. She finally "decloaked" last week. Her name is Suzanne and you can find her over at My Overstuffed Room. Unfortunately, the last package never arrived. I hope she's able to track it down. I thoroughly enjoyed this Secret Pal exchange.

Hmmmm....sounds like a nice weekend! I still need to document my stash for Ravelry. I'm a bit scared!

Wow! That is a busy weekend!! I need a nap after reading about all that productivity and fun. I've put myself on the "list" for Ravelry, but am almost scared for the invite to arrive. I don't think I'll ever be able to log in the stash!

My kitties prefer the unspun wool to the yarn. They have successfully managed to felt some very nice fibers with all the kitty lovin'.

That stash documentation is a beast, isn't it? But it's SO nice to have it done. I love looking at a pattern online and then being able to look at my stash, even if I'm at work, to see if I have anything appropriate.

Of course, I destashed nearly everything but the sock yarn, so the answer is almost always no!

I am slowly trying to gear up to entering my stash. I have done 3/4 of 1 box. Of the boxes in the upstairs office. And there are 4, and then there's the downstairs storage, for which my DH built floor-to-ceiling shelves. And I'm scared just typing that out. :)