As promised, I present to you a guest blogger, albeit a day late. That's better than being a dollar short, eh? So without further ado, I turn the blog over to Keith (who is, alas, neither blogger nor knitter).

This occurred... in our front yard.

I had spotted the bear in our back yard and went to get the camera. By the time I got back to the rear deck, he was nowhere to be seen. Thinking maybe he had wandered out front, I opened the front door and found him on the front porch.

He did not care for this up close and personal meeting and scooted off the porch. Then he discovered one of our two cats (NoName), who had been sitting on the swing but, seeing the bear, had opted to attempt invisiblity under the swing.

Young Mr. Bear decided to see who was under there, and rather hesitantly tried putting his paw under the swing. 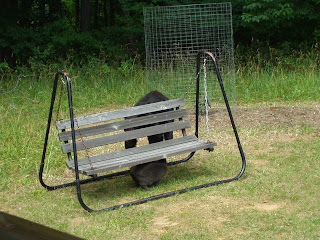 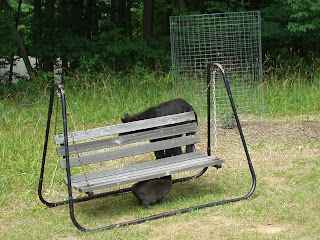 By then, both Barbara and I were on the front porch, and all of this seemed too much for Mr. Bear who decided to beat a hasty retreat. 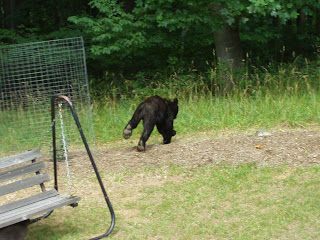 Keith lives about an hour west of where I live and lives on a mountain. It's not unusual for all manner of wildlife to be found on his property. Last year (or maybe year before last), they would occasionally see a mother bear with two cubs wander through. Keith thinks that this bear is one of cubs. Rumor has it that a bobcat has also been spotted on the mountain. Fortunately, Keith and Barbara (and their cats) have not had an up-close and personal meeting with it.

It's Beachin', Baby!
Today's the day we head down to the beach. The house sitters are all lined up and the supply of cat food has been replenished. All that's left to do is to pack and leave. Tom is out on a 20+ mile run and I've got yoga class in a couple of hours. We'll be getting a late start, in the hopes that we'll miss most of the traffic.

One of the more important tasks is to decide what and how many projects to take. Definitely a sock or two, an unfinished project, maybe a new project, and some spinning. Do you think I'm overpacking?

Have a great trip!

Better to take more projects than not enough!

HAHA! Scarey bear! EWWW!
I always pack more projects then I need, but it is SO nice to have a choice!