One doesn't often associate vacation with getting a lot of things accomplished, unless it's sightseeing or eating. However, the Simonds Family Beach Week offered the perfect venue for getting things done. Without further ado, here's what I did on my summer vacation: 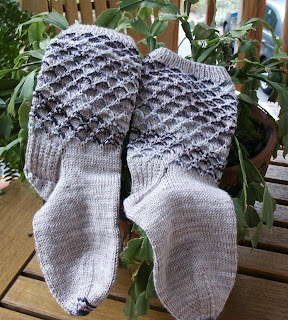 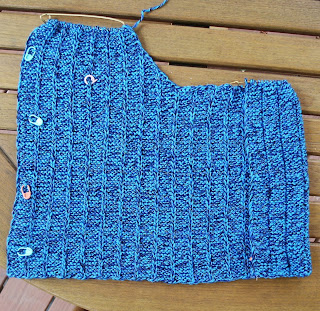 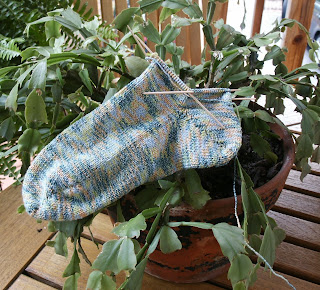 All in all, it was a good vacation. The family group was smaller this year. The three nephews weren't there and one sister-in-law had to leave early to go to back to work. The youngest niece brought her boyfriend, which was a trip. He's a nice enough young man. Watching them together brought back memories of what it was like to be sixteen and in "love."

One of the books I read was Julie and Julia: My Year of Cooking Dangerously. It was written by a woman who was approaching her 30th birthday and decided to cook all 524 recipes (except variations) in Julia Child's Mastering the Art of French Cooking in 365 days. I was so inspired that I pulled out my copy to leaf through as my bedtime reading last night, trying to find something to make for dinner tonight. (Although after stepping on the scale this morning, I quickly nixed that idea. I did more damage than I thought.) While I don't want to cook all of the recipes in the book in one year (brains, sweetbreads, kidneys...no thank you!), I would like to use the book more than I have.

Knitting Progress
While I can claim success on the Blue Danube socks and relative success with the simple stockinette stitch socks, the other knitting is not going well at all.

The swatch? I didn't get gauge and I don't have the next needle size up.

The Too-Many-Choices top? Even though it looks good, it's an unmitigated disaster. I realized (even though I read the instructions several times) that I started the neck shaping in the wrong place, which could account for the fact that the v-neck was way longer than the round neck. However, what makes it a disaster is that when I knit the second half of the top, I spaced the button holes based on the measurements of the first (wrong) half. Yup, it gets ripped back to the first buttonhole. Sigh.

After I realized the error of my ways, I decided to see if the v-neck on the first half would work out as written. I ripped back to 3.5 inches about the armhole bind-off and started decreasing. The pattern instructs you to decrease until there are 11 16 stitches left (that was another mistake), then knit following the stitch pattern until you are 6.5" about the armhole bind-off. At that point, you can start the should shaping. I was more than 6.5 inches above the bind-off after I completed the decreases (and my row gauge is pretty close). So it's back to the Basket of Unfinished Objects drawing board again. Here's a picture of the stitch detail to distract you from the pain of having to frog almost an entire half of a sweater: 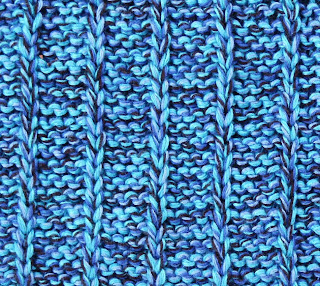 And here's the stitch detail from the Blue Danube socks: 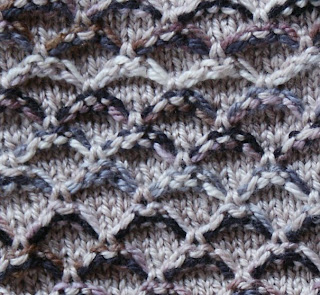 I don't think I'll get much knitting in today. I discovered an infestation of Indian meal moths in the corner cabinet in the kitchen. The suspected source of infestation is the bird seed. Fortunately, the moths don't eat fabric or wool so the stash is safe. However, getting rid of insects was not my idea of how to spend the afternoon.

PS: If I don't visit your blog, it's because I suspect that you are reading or have read the final Harry Potter book and that you will talk about the ending. I don't want to know.
Posted by Teri S. at 12:26 PM

My blog is safe, although we both read the book we don't talk about it on the blog. Your vacation sounds great!!

your vacation sounded like a lot of greatness! you got so much done too! :)

my blog is harry potter free. i have never watched a movie nor read any of the books. :) tee-hee...

I too am knitting the too many choices top. You can see how far I got on my blog but I had to set it aside as I was not getting good vibes from it any more. I do plan on picking it up again after I finish the socks I'm works on. I have to say your Blue Danube socks are beautiful. I hope I get over ADD to knit me a pair one day.

No HP worries here...the friend who loaned me the audio book neglected to include the last CD. I'm on hold for the time being as I can't face getting to the sixteenth one and not being able to go any further. :(

It sounds like a great vacation, despite some knitting frustration. Love, love, love the socks!!

Teri, I like the way you vacation! It's funny though that when we go out to Nags Head, my week sounds exactly the same. Eating and drinking too much, lots of knitting (including a dork up here or there) and hanging out on the beach. Doesn't get much better than that! Love the Blue Danube Socks! VERY pretty!!!