In my last post, I confirmed that I have a raging case of startitis as well as accepted that I suffer somewhat from Second Sock Syndrome (SSS). Have no fear; it's not as serious as it sounds and might even be downright positive. You see, I made an astounding discovery this week.

Startitis is a cure for SSS!

I know that you are skeptical. But think about the symptoms of startits (as documented by the Yarn Harlot in her fine book Stephanie Peal-McPhee Casts Off:

It's logical that, given enough time and distance from the first sock, instead of casting on an entirely brand-new project, the second sock of any of the unfinished sock projects would make a great new project to cast on. Given that a sock is a relatively quick project, the patient should be able to get most of the sock done before the urge to start a new project strikes or before the sock once again loses its allure.

At least, that's what I found. Behold! 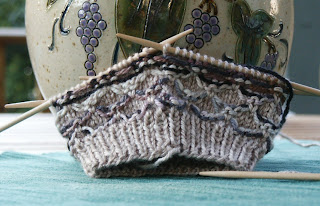 This is the second Blue Danube sock. The simple stockinette sock had lost its charm; I needed something a little more challenging (but not as challenging as the Sweaters of Despair). I needed something new. This second sock fit the bill perfectly. The Texas contingent might recognize this sock as the one that I was attempting to knit at the blogger meet-up at MDSW in 2006. I was so excited and so intimidated by all the awesome knitters that I messed it up royally and had to frog it later. I started it again, only to have the same thing happen. So the poor sock was relegated to the Basket of Unfinished Projects for more than a year.

The slip stitch pattern this pattern uses is wonderful. It's simple enough to memorize, it's easy to knit (assuming that you can count to five), and it looks amazingly complex. And the yarn is a luscious blend of merino and silk. What more could you ask from your knitting? 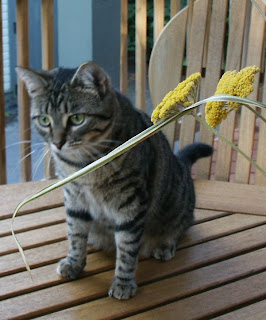 If Emma is interested, I seem to have a few spiders around here that need catching. My two only want to watch them and howl at me to come deal with the situation.

Love the sock! I've found that packing up the socks for travel forces me to work on them when I'm at the mechanic's or in the doctor's waiting room. Of course, this plan doesn't work with complicated patterns since I can't use my "Knitting Bad Words" in all settings.