Last night we went out to Samurai in Ashburn for some great sushi and sashimi. The chef owner used to work at Kobe in Leesburg and dreamed about opening his own restaurant. He did and he makes some amazing sushi and sashimi. My favorite is the white tuna. It's very buttery and tender and oh so tasty! The white tuna has displaced regular tuna as my favorite.

I returned home fortified and ready to tackle the Christine sweater. I read through the instructions a couple of times, circled the stitch counts for the size I'm making and proceeded to cast on, going for 195 stitches. Long tail cast on, of course. I reached 70 stitches and realized the long tail was not nearly long enough. I ripped it out and started over. I counted my stitches twice, getting the same count each time. Excellent! Maybe this time the sweater isn't going to whip my butt. The lower edge consists of four rows of seed stitch. I knit three of them and then went to bed, feeling pretty pleased. Of course, the seed stitch edge has always gone well.

This morning I opted to knit the Christine sweater instead of the Jenna sweater. I started the fourth row, moved the button band stitches to a pin, knit the remainder of the row, moved the other button band stitches to a pin, glanced at the pattern and it said "185 stitches remaining." Suspicion grew and my heart sank. 185 stitches remaining. I counted, then counted again. I have 175 stitches left. I hadn't cast on enough stitches! Resignedly, I slipped the work off the needles and started to rip back. I really hate casting on hundreds of stitches. I looked at the cast on tail and decided that I had enough tail left for the remaining 10 stitches. So carefully, oh so carefully, I removed the last row and placed the cast on row back on the needles and cast on the remaining stitches, with yarn to spare.

Tom came in while I undertaking this operation. "I hate this sweater," I said. He replied "Don't knit it."

He's got a point. But I cannot let a mere sweater get the best of me. I will prevail.

Here's a picture of the Sweater of Frustration: 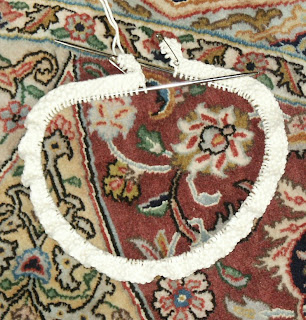 Emma, however, is not fazed by any of this. 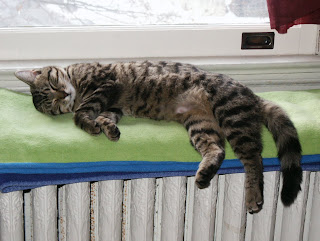 Hmpf. What would reasonably voices know about anything? Dern right - you tell that sweater who is boss. :)

Or else you'll give it to Emma to play with.

Emma is modeling a very effective meditation technique. After sewing my current cardigan together with the sleeve holes and neck openings backwards, I took the advice of my Big, Fluffy Kitty and "meditated" in a similar fashion for much of the afternoon. She's like a guru, that one!

I admire you for sticking with this project...it has really been sticking it to you! I don't know if I'd have the patience.