Fifty years ago today, in Baltimore, Maryland, my parents married. They had known each other for only six months when my father discovered he was going to be transferred to California and wanted my mother to join him. He proposed, she accepted. She recounts that she went home and asked her family what they were doing in two weeks and if would they like to attend a wedding. Two weeks later they were married and off to California. And so began fifty years of what I can only describe as an interesting (in a good way) partnership.

Mom and Dad had four children in the next seven years and lived all over the country. My father's job transferred him far more often than the military transfers its personnel. We lived in California, Washington, Utah, New York, Maine, New Jersey, Maryland, Georgia, and West Virginia before finally settling in Virginia in 1964. We drove from place to place, with at least two kids in diapers. Imagine driving cross-country with several children, in diapers, without the benefit of disposable diapers or any of the electronic gadgets that keep the kiddies amused. Looking back on it, I've come to the realization that my parents had incredible fortitude to survive that experience.

We also camped for our vacations, in a tent. Mom was a city girl, born and bred in Baltimore, so camping was a new experience for her. Dad was raised in a more rural setting, and fished and hunted and trapped. In the early days, the campgrounds we went to had no running water or indoor toilets. We had to pump the water and use outhouses. For us kids, it was an grand adventure! I recall arguing over who got to pump the water. After we returned to the east coast, we camped at Cowan's Gap State Park in Pennsylvania most years. It was these early experiences that instilled my love of the outdoors and to this day, my best vacations have been camping vacations, not luxury vacations.

So, to my parents I say: I love you more than you can ever know and thank you for sticking out the early days. I hope my marriage grows and strengthens over the years as your has. 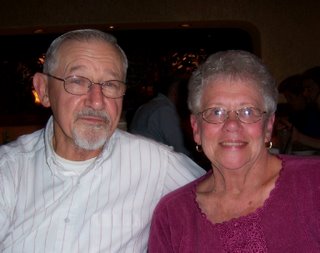 Happy 11th Anniversary!
To my wonderful husband, I say: Thanks for putting up with me and all my foibles for the past 11 years. Even though I don't always say it, I deeply appreciate all you do and your support for my endeavors. I love you and still look forward to spending the rest of my life with you.

Sheesh...you got a Sheep all misty-eyed here! Those are two of the sweetest and most heartfelt tributes I've read in a while. Happiest of anniversaries to everybody and many more!

What a great story--Happy Anniversary, everyone! :)