The end is near! Well, it's more near than it was last weekend. The blanket is still slowly progressing, thanks to daily 5:30 a.m. knitting sessions. I'm on the eighth ball (out of 12) and have completed 224 rows. I'm at the point where I'm eyeing the blanket and determining if the proportions are pleasing enough to stop knitting (they aren't...yet). I have no qualms about bailing making a design decision to change the length. Here's a picture of the progress so far, shown with my stuffed tiger collection: 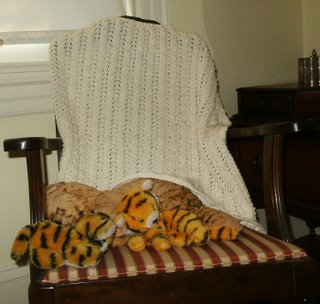 I've made progress on the Jaywalker sock as well. I love working with this pattern in this colorway. The colors keep changing and I'm entranced by the way the bar increases and double decreases make the pattern happen. I like the way the stitch marker on needle one moves to the left before the double decrease and to the right after the double decrease (yes, I'm easily amused). I've been sneaking in a little lunchtime knitting at work, only about 30 minutes or so, and spend a little more time on the weekends. If I'm lucky, I'll start turning the heel today. 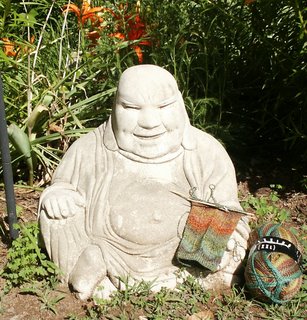 Bird Update
The baby birds are growing, although they are far from being self-sufficient. They are a week old today and if you look closely, you can see their eyes, beaks, and the primary feathers on their wings. They are definitely house finches. 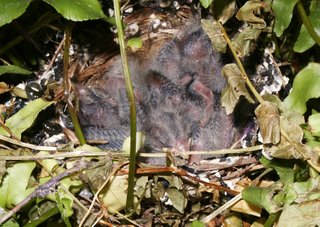 A flicker has recently arrived in the neighborhood. It's a fairly large one, and the first one we've seen in several years.

Jezebel fancies herself an expert bird hunter. Tom and I were sitting on the deck the other evening, watching the bats. Jez was laying on her cushion, when all of a sudden she sat up and stared intently at the garden. Then, with great purpose, she made her way down to the garden and disappeared into the foliage. A little while later, Tom saw her out of the corner of his eye, furtively climbing the deck stairs and slinking into the house. We followed her and found her in the dining room, gleefully tossing around a dead catbird. It was pretty clear that she didn't catch it because all of its feathers were intact (unless the wren I rescued from her). Tom had found another dead catbird a couple of days ago. I hope that the West Nile virus hasn't moved into the catbird population.

And finally, a parting shot of one of our Asian lilies. These flowers are so colorful and abundant in our garden right now. It's a shame that they don't last all summer. 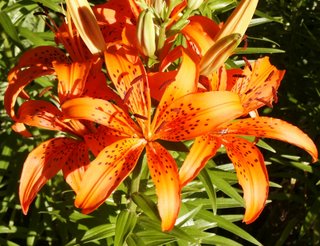 Oh, I love lilies! You're right--it's such a shame that they fade so quickly. The Jaywalkers are looking good! Great colors. :)

Your pictures are stunning! Love the colors you chose on the Jaywalkers. My next pair will be in a more interesting yarn for sure! Persephone and Desdemona are also doing quite a bit of hunting, but they are sticking to bugs. (indoor cats have fewer options...)

Don't forget babies are little - that blanket is huge compared to an itty bitty little one! It looks pretty pleasing to me! Then again I'm a wooss and would've stopped eons ago. Your Jaywalkers look fab & the itty bitty birdys ...well they're still to little to be cute. Maybe in another week or two. Your lillies are Gorgeous! Wish mine would hurry up and bloom!

I know exactly how you feel! I have a baby blanket for a kid due in August...row after row of mind numbing white...I think my brains were going to start leaking out my ears. So I have put it aside and started on a pair of socks. They will be a father's day present for my step-dad, and the way the stripes are comming out makes me giddy after all the white!
I just started getting back into socks, after the whole Knitting Olympics crack baby goat socks, and these are turning out well, so I think I will do the Jaywalker pattern that you keep raving about next!!