The Jaywalker is moving right along. I turned the heel last night: 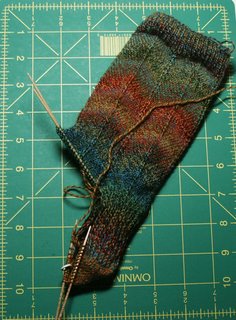 I'm still loving the way the yarn is working with this pattern. I don't think I've repeated a color pattern yet. That doesn't bode well for the second sock because I don't think I can get the color changes to match. But...I do have a second ball of the same color and dyelot and maybe I'll dig into that to make the second sock. That's assuming that the color progression is the same from ball to ball.

The sock fits passably well. But I've got this suspicion that the gauge gods are going to smack me down soon and smack me down hard. I can still get the sock on but it's a bit of a struggle. I keep telling myself the needles are inflexible and that's what making it difficult. But I'm afraid that I won't be able to get the sock on after working the heel gussets. I'll know later tonight. Keep your fingers crossed!

The blanket is still progressing, although I had a bit of a setback this morning. I was knitting along, congratulating myself on the fact that I haven't had to do significant tinking in quite a while. The pattern has finally worked its way into my brain. But after knitting three rows, I took a look and groaned at what I saw. I repeated the second pattern row, thus making a big blob in between the cables. Net row gain this morning? One stinkin' row.

Note to Self: Never, ever congratulate yourself on how well you knit, especially at 5:30 in the morning. The knitting goddess will get you.
Posted by Teri S. at 8:03 PM

The Knitting Goddess is just plain mean sometimes. Don't tell her I said that. I also was nervous about the jaywalkers fitting, but discovered that, while the leg is quite tight, it actually does work. The ribbing is looser and you sort of wiggle it up. Bob's your uncle, you have sockage!

My jaywalkers are kind of difficult to pull on, but they fit just fine once I wiggle my heel into them. And the bonus thing? Because Grumperina is a genius, the bias of the sock prevents them from falling down!

Love, love, love your socks!! I haven't gotten on the jaywalker bandwagon yet, but it's tempting...very very tempting!

My fingers are crossed for a well-fitting jaywalker. I love the colors-like you said, they look great with the pattern.

What a nice colorway! I'm planning to make Jaywalkers out of Trekking, too; they look great!