Our luck finally ran out after being blessed with a relatively cool and non-humid spring. Yesterday was hot, hot, hot, and today was even hotter, with the temperature topping out at 95 degrees, in the shade no less. We were going to go to the Potomac Celtic Festival at Morven Park but it was too hot. Tom did a long run yesterday and was pretty wiped out and today we decided that it was still too hot and opted to get stuff done around the house.

Tom ended up straightening up the basement some and went through things that we don't want anymore and posted them on Freecycle. I concentrated on ridding the house of dust buffalo. The herd was beginning to disturb my sleep. Our house isn't all that large (compared to the houses they are building today, though, it's miniscule), but it takes the better part of a day to clean it. And even then, there's something that ends up not getting done...washing the floors, dusting, or cleaning the bathrooms. Today, though, I managed to get two out of three completed. I didn't wash the floors. Perhaps next weekend will be for floor washing.

Bird Update
Sadly, I have no pictures of the birds today. We took the fern down so I could photograph week two of their development and darned if two of them flew away. Granted, they didn't fly very well or very far (which made me feel bad), but the rest of the brood (there were four birds) should fledge this week. They grow up so fast...

Eating Local
Tonight's dinner was almost all local. We grilled local asparagus, organic fennel, and rockfish (most likely caught in the Chesapeake Bay). We rounded out the meal with a salad that had local organic romaine, tomatoes, and herbs from our garden. The cucumber wasn't local (I ran out of cash at the farmers market) and neither were the baked potatoes, toppings, and wine. All in all, though, a very fine meal.

Knitting
And of course, there was knitting. Tom took a nap after his run yesterday, so clearly I couldn't round up the dust buffalo. Instead, I spent some quality time with the Jaywalker and finished the heel and started the foot. I'm still a little nervous about how tight it is, but I can still get the sock on my foot. I've had a couple of mishaps with stitches leaping off the needles, but fortunately I've been able to pick them up with no problem. Here's the sock: 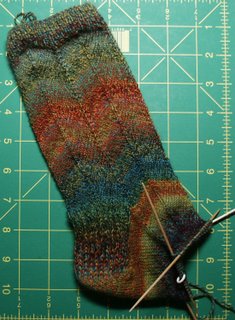 The baby blanket continues to progress, although I didn't get as much done on it as I would have liked. A migraine on Saturday morning precluded all work on it and I was able to knit about three rows this morning. It's about 29 inches wide and 32 inches long so I've got only about three more inches to knit. Woo hoo! Then it's on to embroidering hundreds and hundreds of French knots. That's going to be rough going.

One Skein Secret Pal
I ordered a very special yarn for my One Skein secret pal and it arrived this weekend. It's going to be very difficult to mail this skein out to her because it is so yummy! What is it? That will remain a secret until after I mail her the goods. I'll post pictures then.

I was slaying the mighty insects and couldn't deal with the buffalo. And now it's just too hot. Aren't they endangered or something? That's my excuse and I'm sticking to it.

Your Jaywalker Trekking sock is coming along wonderfully! And I'm loving all of your updates. Hmmm, we may need to hit the Farmers Market and local butcher soon!