I've been knitting the second Gentleman's Fancy Sock all week, with the goal of having the sock finished by New Year's Eve, so Tom could wear them that night. As I was knitting early yesterday morning, it seemed very likely that I would actually achieve that goal. I was within 20 rows of reaching the toe when I looked at the amount of yarn left. "Hmmm," says I, "It seems like I've got an awful lot of yarn left." At this point on the first sock, I was beginning to wonder if I was going to have enough yarn to finish the sock. A nagging suspicion crept into my mind. I pulled out the first sock, matched it to the second sock at the heel, and... 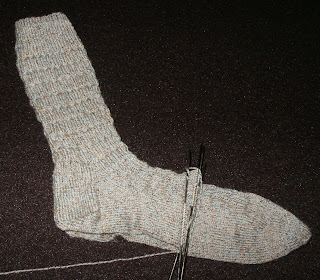 The lack of an active sock presented somewhat of a problem yesterday afternoon. What could I knit on the drive up to my mother-in-law's? It takes about an hour or so to get there. I pulled the Counterpoised shawl off the shelf and figured that I could make a bit of progress on that.

Trouble-free knitting is clearly not in the stars for me right now.

The first row I knit presented no problems as it was a purl row. The second row was a pattern row. No matter how hard I tried, I could not get the pattern repeat to come out right. The border and the first 12-stitch repeat looked fine and after that everything fell apart. I unknit, looked at what I had, and tried again. No luck. It didn't help matters that we were driving on bumpy, twisty country roads and the light was poor. So Counterpoised was unceremoniously (and rather grumpily) crammed back into its little Ziplock (TM) bag.

I think both projects are going to sit for a while. Next project? A nice soft easy hat for a friend who is currently going through chemotherapy for breast cancer. She's doing amazingly well and is still training to run the Miami Marathon at the end of January.

My Mother's Knitting
Mom seems to be having similar problems with her knitting. The project that she started on Thanksgiving has been relegated to the knitting bag until I can get down there to figure out where she started to take artistic license. My sister-in-law Barbara has turned out to be an enabler and started a little stash for Mom this Christmas: 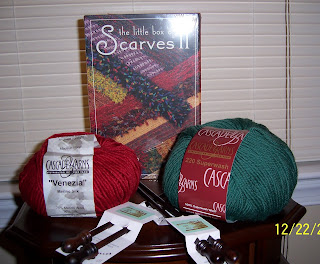 Barbara did an excellent job of choosing yarn and needles (rosewood...yum!). Mom's been enchanted by the Villandry Lace Scarf that Sheepish Annie knitted up a couple of times this month and decided to take advantage of the new needles and yarns and give it a go. Sadly, that project is not going well either and appears to have been relegated to the knitting bag as well. Mom's comment? "It looks like a knotted mess." It's a good thing we're visiting next weekend so I can get her back on track.

A Christmas Present
Every year, the adults in both families draw names for the exchanging of gifts (our families are a bit large). Yesterday was the Simonds Family Christmas Celebration and a good time was had by all. In a bit of serendipity, my brother-in-law Steve and I drew each other's names. I presented him with several books about World War II (it was Tom's idea; he's been waiting for one of us to get Steve's name), which he loved. Steve gave me this: 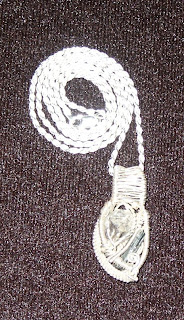 His son Martin made this pendant. The stones (a Herkimer diamond and some other greenish mineral) are wrapped in sterling silver. Each piece is one-of-a-kind and all of them are stunning. Martin uses all sorts of different stones and works primarily in silver. If you are interested in seeing more of his work, contact me by leaving a comment and I'll get in touch with you.

The Year in Review and a New Year
It's hard to believe that 2008 is upon us. Where did the time go? I swear, each year seems to go by faster than ever and most of the things that I want to accomplish don't get done. I did finish some projects this year, but not many. Two pairs of socks (almost three, darn it), one shawl, and one scarf. I didn't manage to get much spinning in, either, despite what seemed to be a good start.

What does next year hold? More socks, to be sure. After some reflection, I think I need to approach my knitting and spinning with some structure, given that I have a lot of UFOs that are most likely failed projects about which I'm in denial. So, I'll take the approach of a scholar and start a project, working through the techniques until I understand them. I will finish one project before starting another (socks don't count, although I will keep only one pair of socks on the needles). After "mastering" a particular type of knitting (as evidenced by a finished object, I will dive into the UFO basket and finish a project of the same type of knitting. I will not try to knit as many things as I can. That said, here is what I would like to accomplish in the coming year:

That last one is going to take some thought and planning. I see so many sweaters that I'd like to knit, but I find the yarn and time investment daunting. I've been shying away from bulky yarns, but perhaps that's my ticket to a completed sweater, since for all accounts and purposes bulky sweaters knit up quickly.

What are your knitting goals for 2008?

Boo for misbehaving socks! But, if it doesn't fit, then it isn't going to work so the frogging is a good thing in the long run.

I'm not really good with goals, I fear. I tend to see them more as "guidelines." Then I am so apt to forgive myself for not adhering to them, that less gets done. I'm better off just going with what I feel like doing in the moment. More seems to get finished that way.

Unfortunately, this is not a good strategy for things like bill-paying or paperwork filing. ;)

wow! One project at a time, that's *very* restrained. I'd never be able to stick to that. Happy new year!

Every year my resolution is ONE project at a time. January starts out great, I usually lose it about May or June. Once again, it will be show up as one of my resolutions. Maybe this year I will stick to it! ;)

Those seem like very sensible, very reachable goals for the new year. But I'm with you.... how the heck did 2008 show up so quickly??

Shame on the sock.