Even though I have nothing in particular to blog about today, I thought I would, given that I seem to be blogging only on the weekend. Fortunately, we didn't get anymore snow yesterday, but it remained cold and windy. A prodigious amount of sunshine has melted most of the snow as well. So maybe, just maybe, the second half of the month will see us cruising into Spring.

The snow and cold weather hasn't daunted the birds. They are very active and very vocal, especially the starlings. Even though I find these birds to be rather despicable, they have amazing vocalizations. They like to perch on the chimney and their calls echo down into the fireplace in the mornings when I've got a fire going. Emma finds that to be very interesting and a bit disconcerting.

Our little town is blessed with a very fine Italian store, Galletta's. Yesterday they had a wine tasting, so Tom and I met our friend Leigh there. The wines were imported by Michael R. Downey Selections, Inc. and they were very good. I knew Mike a long time ago. Sadly, he died from lung cancer a couple of years ago. It's good to know that his children have taken over and grown the business. Galletta's also had a variety of their food selections out for tasting as well. I'm not a big fan of cold cuts, but they have a porchetta with rosemary that was heavenly. Their tiramisu is to die for. The cheeses are excellent. Yum!

After the tasting, we walked over to our favorite watering hole for a pint of Guinness to select St. Patrick's Day. Strangely enough, we were the only ones drinking Guinness. Everyone else was drinking wine or spirits. I rarely drink beer; it tends to fill me up and suppress my appetite (although there are times when my appetite could stand to be suppressed), so by the time we finished, I wasn't so hungry for dinner.

Last night's dinner was a brown rice pilaf with carmelized onions and toasted pine nuts, steamed broccoli with lemon, and a pan-roasted fillet of rockfish. It was late by the time we ate, so I had just a small portion. Emma was very interested in my dinner, particularly the rice and the fish. Of course, we don't feed her anything but her cat food (and a little bit of vanilla ice cream for dessert). But she still manages to eat some people food.

I woke up around 2:00 this morning, to the sound of Emma bathing. But something didn't sound quite right. She wasn't bathing, she was playing with a balled-up piece of paper. No, that doesn't sound right either. It sounds too...wet. I rolled out of bed to see what it was she had. Imagine my surprise to see that she had the baggie of pine nuts that I had left on the counter last night. One side was chewed away and there were only a couple of pine nuts left. We found some of the others ground up on the kitchen floor this morning. We're learning that we can't leave any food out because Emma will try to eat it. I was surprised that she got the pine nuts because they were in a sealed bag. That cat has one sensitive nose!

Knitting News
I actually managed to get some knitting in this morning and got to the point where I can start working the front of the Christine sweater. Woo hoo! But, I might have to rip back two rows. The pattern calls for knitting 21 cm. and I actually knit 21.5 cm. I need to measure again and decide if that half a centimeter is going to hurt me.

Have you visited Anne's blog lately? She has posted pictures of the sock she's been designing and the colorways intended for it. They're very nice. I can't decide which I like better: River or Sagebrush and Cedars. You can see all of her fine wares at Wooly Wonka Fibers. 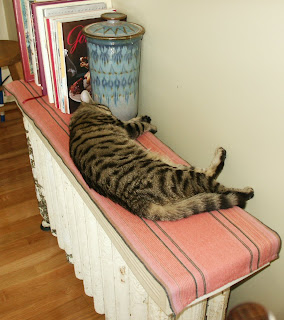 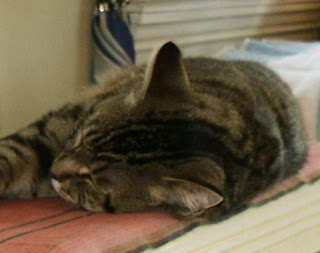 Ahhhh...Wooly Wonka! My new weakness. I've got another two ounces of her Shire blend and a new orifice hook winging my way as I type. Happy happy Sheepie!

I wish I had a radiator to sleep on. We have piles and piles of new snow here and can't seem to get above the freezing mark. Bleh.

Have a great week!!

Everybody knows a pint of Guinness is practically a loaf of bread on its own! :) Sounds like you had a nice St. Patty's day weekend. Hope the weather warms up a little for you.

I think the snow stayed up here in Maryland.

Thanks for the nice comment about the shop! Nothing better'n a little eye candy, I always say.

We definitely have to get the Emmas together. Mine has developed a fascination with dog food recently.