A Maryland Sheep and Wool virgin, that is. What can I say, other than "Oooohhhhh!"

First, there were a lot of sheep there. And goats. And bunnies. And llamas and alpacas. All were very cute. The sheep smelled, well, like sheep and that's a very good smell. Yes, I know, I'm weird. Most people think barnyards stink. I think they smell earthy and good.

Look at these guys: 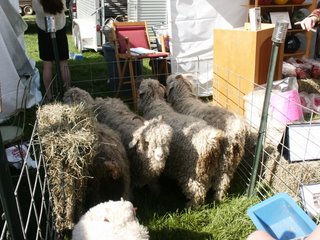 Mohair goats (or more like mohair goat butts). Aren't they adorable? The sheep were too numerous to photograph, but they came in all shapes and sizes. And voices! Some sheep had deep base baaaa's while others had "normal" baaaa's. I had no idea that sheep had deep voices. It fascinated me to no end.

And then there were these fine ladies: 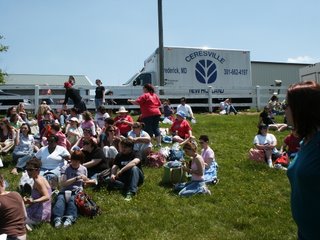 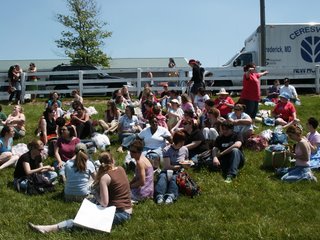 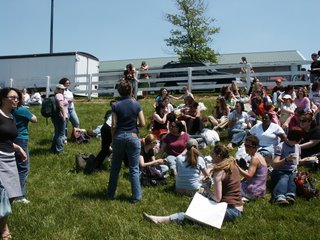 A whack of knit bloggers. And that wasn't all of us. Wendy and her cadre were a bit to right of us so we all picked up and trooped over there. It was awesome. And because there were so many people around, the old shyness kicked in. You'd think that after being out of high school for say 30 years that I'd get over feeling like I was tagging along behind the popular folks. But I met these fine knitters from Dallas, who helped me get over that feeling: 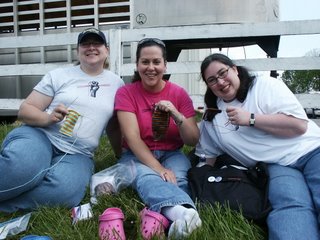 From left to right, that's Nanc, Petra (of 200Sox fame), and Chris. They had their own t-shirts and blog business cards! I need to do that for next year.

I also met Jody and Linda, her mother (and, alas, blogless), OneCraftyBitch, Melanie, Maggi and Suzanne.

It felt so right to be with other knitters, since I knit solo most of the time. Everyone hung around on the grassy knoll for about an hour or so and drifted away for more stash enhancement.

And of course, there was stash enhancement on my part, too. But not in a big way. A little sock yarn, some Duet for Clapotis, some fleece for spinning, a bit of roving, a little bit of cashmere/silk. And then there was the fleece that got away (more on that next time). Stash pictures will be posted the next time we get some sun. I don't think the flash will do justice to all the different colors.

In the meantime, happy knitting!
Posted by Teri S. at 9:06 PM

Sounds like a blast! I hear you about the whole "cool kid wannabe" thing...do we ever really get over that? Glad you got to hook up. It's always nice to be amongst fellow fiber enthusiasts! They "get it."

Aww, you were great! It was wonderful meeting you at MSW. And no worries about the shyness... um, the three of us were more than a bit petrified by the mass of knitters. Oh my!

And after we saw your wonderful stash, we booked it over to the Brooks Farm booth to get some of our own.. YUM!

Oh.. and is there any way that I could "steal" a copy of that picture of us? To think that we forgot to get any photos of ourselves all weekend long... crazy in the blog world!

Brooks Farm, my favorite! Glad you had such a great time in Maryland; fiber folk are the best!

Teri, it was so so soooo nice to meet you on Saturday! That ginormous whack of knitbloggers totally shied me out, too, and if you hadn't plonked down and talked to us, I might have just stayed clammed up!

Hey Teri! I ditto what Chris and NanC said above. I really enjoyed talking to you and once about 1/2 the people left, I wasn't quite so overwhelmed! Can't wait to see what you spin from that grey curly fleece you had!