It's been an exciting weekend, nay, week, chez nous. On Wednesday, there was a fun-filled picnic at work at which I got to try my hand at playing cricket. For those of us who aren't comfortable with team sports, cricket's the ticket, especially if the majority of people playing haven't played it before. It's mostly a lot of standing around, interspersed with some bowling (or pitching to us Americans) and maybe some batting. You don't run bases, you run between two wickets, which aren't placed that far apart. And if your fellow batsman hits the ball far enough, you don't even have to run; the team automatically scores four or six runs, depending on the distance hit. And the best part? When you bowl, you get to throw like a girl! And you get to bounce the ball on the ground! How cool is that?

Yesterday morning was spent knitting and running some errands. Run of the mill stuff. However, after I got home, pandemonium ensued. Somehow a wren managed to get into the house. That in itself was not a problem. The problem was the cat was also in the house and doing her best to prove that she was a mighty huntress. I was yelling, the bird was fluttering, Jez was pouncing, and Tom was trying to get Jez away from bird. Feathers and fur were flying! Tom grabbed Jez and took her into another room. The poor wren was huddled on the floor underneath a table, trying to be very small. I gently picked it up in a towel (it didn't even move) and took it outside to the garden and examined it. The wings didn't look broken, there wasn't any damage other than most of its tailfeathers were gone. It simply sat in my hand, beak opening and closing. Its eyes slowly closed and I thought it was dying. Then, after a few minutes, it flew away, despite its missing tail.

The rest of the day was spent visiting wineries in Rappahannock County with our friend, Leigh. We visited Farfelu, Unicorn, Rappahannock Cellars, and Gray Ghost. All the wines we tasted were quite tasty, even some of the reds. Virginia is not known for high quality red wines, but they are getting much better. I found them to be undrinkable ten years ago, but now I could probably drink a glass of some of the reds. The terroir in the reds comes throug loud and clear for me; the reds have a very mineral or chemical characteristic. For some reason, it is not noticeable in the white wines. A couple of the vineyards had some excellent local musicians playing. It was a wonderful way to spend an absolutely gorgeous day.

Before we headed back to Leesburg, we had dinner at Four and Twenty Blackbirds, which specializes in food using local ingredients. The menu changes frequently and the food was excellent. At first glance, the menu is expensive, but the portions are large (leftovers!), giving you a good value. The wine list is small, but good, and very reasonable. I don't think there was a wine that was priced over $50. And that is very unusual in these parts. We would definitely go back.

I plan to spend today and tomorrow (gotta love a long weekend!) getting some chores done around the house. The dust buffalo are getting a little out of control. There will be knitting, of course. And if all goes well, maybe some spinning on the deck. Chris is inspiring me. Go check out her new wheel! 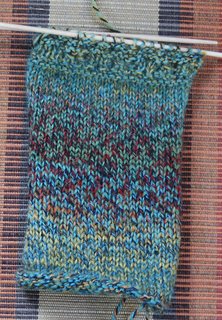 The swatch for my Trek Along with Me socks...I definitely think Jaywalker will be a good match for this yarn. 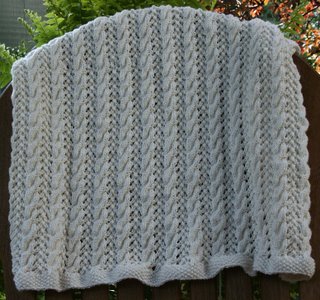 I just started the sixth ball this morning. You are looking at 158 rows, with at least that many more to go. To put a little more pressure on this knitting, the baby arrived Thursday a week ago, 11 days early. Ack!

Ohhhh, I love doing winery visits! Hub and I have just recently become very interested in wine, and have toured a couple small wineries in our area . . . but now it's just getting too hot to tromp around in the heat and nature :)

Wow!!! I got tired just reading that post. And the weekend isn't even over yet! That blanket is gorgeous and will be worth the wait.

OMG - what a lovely weekend! The wineries and the restaraunt both sound fantastic!

There are some good, small wineries in the Hill Country of TX (about 4 hrs from Dallas, near San Antonio). They seem to specialize in reds (merlots), but they do have a few whites. I'm more of a red wine drinker though.