Nestled in a quiet secluded neighborhood of Historic Leesburg is a small restaurant known to only a handful of lucky residents (currently 3). Renowned as much for its ‘shabby elegance’ as for its eclectic menu, those who wish a table are advised to plan well in advance as the dining room is open only one evening per year.

And that, dear reader, was the opening to menu my husband created for the gourmet dinner. Dinner was:
Appetizer
Ahi Tuna Cucumber Rollups with a Ginger Wasabi sauce
First Course
Spicy Black Bean and Roasted Squash Soup with Crème Fraiche Swirl
Wine Pairing - Willm Riesling
Second Course
Roasted Beet & Goat Cheese Salad withOrange Hazelnut Vinaigrette
Wine pairing – Parallele ‘45’ Cote du Rhone
Entree
Roasted Squash & Mixed Wild Mushrooms Over Crispy Polenta
Wine pairing – Parallele ‘45’ Cote du Rhone
Dessert
Chocolate Chip Cherry Cookie
With choice of
Mango Sorbet or White Chocolate Rasberry Ice Cream
Wine pairing – Chateau Bastor-Lamontagne Sauternes
Everything was soooo good...he really outdid himself! I must say that I've got the best husband in the world. Leigh brought over a bottle of wine and a bar of fine Belgian dark chocolate (73% pure cocoa). Dark chocolate is my favorite.
Next cooking adventure? I was challenged by a friend to make a cassoulet. Cassoulet dinner date--March 13. It should be...um...interesting, given that I've never eaten cassoulet. But that's never held me back before!
In knitting news, I made progress on the cat bed, until I ran out of yarn. I've got a skein of Lamb's Pride Bulky in orange, but given that the colors are light gray and dark charcoal heather, I'm not going to use it. I pinned the back and sleeve of the cable sweater to the blocking board and need to steam it to uncurl the edges. It isn't looking too bad, but I'm going to have to unknit a couple of rows on the left front to make it match. I definitely have to work on my tension on the purl rows. When I was knitting using the throwing technique, the tension was fairly even. I switched to continental and just can't seem to keep the tensnion consistent on the purl rows. Sometimes it's good, sometimes it's not. I might experiment with using continental for knit and throwing for purl.
Unfortunately, the price for last night's dinner was a migraine, probably brought on by a combination of red wine and fluctuating hormones. I've been staving one off since Friday, but it finally got me. And Excedrin Migraine isn't doing much for it. So that's it for now.
Posted by Teri S. at 11:33 AM No comments:

In more ways than one. Work this week was a bit of bear and at times pretty discouraging. Next week promises more of the same. However, the weekend is upon us and I'm going to try desperately to unwind. People at work were beginning to remark on how stressed I was looking.

Tomorrow...ah, tomorrow! I predict it will be rather luxurious. Yoga class in the morning to make up the one I missed on Monday, followed by knitting and spinning. And maybe a nice long soak in the tub. The only chores I have tomorrow are vacuuming and setting the table.

I've been told rather adamantly by my dear husband that I'm not allowed in his kitchen while he cooks up a gourmet dinner for me and our dear friend, Leigh. He's been stealth cooking all week and has not revealed the menu. A fruitless search for enoki mushrooms and fresh figs has led to an adjustment in his plans, but that's all I know. I suspect a tomato-based something--either soup or a tomato sauce. Of course, I could be totally wrong.

This is the teal Corriedale, unspun, and spun, two-ply. It's a bit bulky. But I love the color. 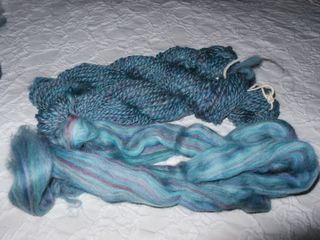 This is my first attempt at spinning after (gulp) twenty years of a perfectly good spinning wheel sitting unused. It was good to spin again, but clearly I need practice. I'm not getting an even yarn, and it's a bit over-twisted, although plying helped relax it a little bit. I think I remember someone once telling me that Ashford wheels are known (well, were known) for their overtwisting potential. I've got some green, gold, and red roving that I'll practice on, since the colors don't quite thrill me. If it turns out nice and I still don't like the colors, it will probably be a gift to someone.

The blocking board arrived today, so I'll block out the cardigan-in-process to make sure that the front that I'm knitting matches the back before I start shaping the armhole.

I lack it. Short and simple. For what, you may ask? Oh, training for the Charlottesville Half Marathon which is on April 16th. I've run exactly one time for 4 miles since completing the Marine Corps Marathon on Halloween. Which was quite appropriate, given that it was ghoulishly hot (it was the 3rd slowest MCM on record). It was by far the worst and most painful marathon I've ever run. I was ready to quit at mile 15. My knee hurt, my hip hurt...I've never experienced such a painful run. So that put me off running. And my training window for Charlottesville is quickly getting smaller. And Charlottesville is seriously hilly. Ack!

The nephew's scarf blocked out rather well. And I decided to chart the VT logo. Good thing, because I can't get the proportions to work. So off the to the nephew the scarf will go and I'll repossess it over the summer to do the logo, if I can figure out how to make it look good.

Yesterday I received extra bobbins for my Ashford wheel, more of the teal roving and an absolutely luscious mohair/silk roving.

This is the nephew's scarf. The tension is a little loose on some rows (you can see the white chair back), but it won't be noticeable when the scarf is worn. 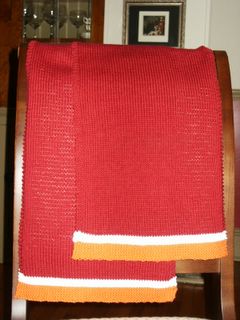 I'll have more pictures tomorrow, as soon as I figure out how to load more than photo per post.
Posted by Teri S. at 9:27 PM No comments:

I got a little knitting done this weekend. The nephew's scarf is almost finished--about 6 inches or so to go. I need to decide if I really want to put the VT logo on in duplicate stitch. I've never done duplicate stitch before, but why should that stop me. If it looks goofy, I can alway rip it out.

I spent a considerable amount of time cooking this weekend. Check out the latest Gourmet magazine. It profiles London and the changing food scene there. Saturday night I made this very yummy shrimp curry. The best thing about it is that it was pretty fast and could be made faster still by using frozen, pre-peeled shrimp instead of shrimps-in-the-shell. On Sunday, I made shortribs braised in stout and served it with buttered egg noodles and smashed peas with mint. I don't cook or eat beef often, but this was a recipe that my husband seemed particularly interested in, so I made it for him. It was pretty good.

My goal for today is to finish the scarf and block it. We'll see...

I just finished blocking the scarf. It took a solid day of knitting before I got to that point. I do wish I could knit faster. As I laid it out, I was a bit taken aback by how inconsistent the tension seemed to be. Maybe it will block out and look okay; maybe it won't. Probably no one will notice (but I will). Tomorrow, assuming I leave work at a decent hour (highly unlikely), I might start working on the VT logo. If I wanted to do things right, I would chart it out first, so I have some idea of scale, etc. I hate doing things right because I want to start doing it now!

I'm playing hooky from yoga class tonight. Tom had said that he wanted to have dinner at Banjara, a very good Indian restaurant in Sterling. But after he refinished two of the windows from one of the bedrooms and went for a run, he was too tired. He informed me of that just as I started to enjoy a Guinness. Drat. Leftovers for dinner tonight.
Posted by Teri S. at 7:11 PM No comments:

Well, welcome to my blog. After getting caught up in other knitters' blogs, I decided it was time for my own blog. What will you find here? Most likely a journal of my knitting and spinning projects, cooking goodies, and commentary on the state of affairs in the world today when I can't refrain. Will you be entertained? I can't guarantee it. I hope that I can provide inspiration to new knitters and spinners like other knit bloggers have given to me.

What are my current works-in-progress? Let's see...

I'll post pictures of the various projects as soon as I figure out how.