What else can I say about the expo at Stitches East? And how cool is it that Stitches East is going to be at the Baltimore Convention Center next year, November 2-5? I think Baltimore is a much better city for Stitches than Atlantic City. Lots of good restaurants, lots of activities in the Inner Harbor, and it doesn't have the aura of...well...sleaziness (my apologies to the fine residents of Atlantic City).

I was up at 5:30 and out the door at 6:35 for the drive to Towson to meet the gambling bus. I arrived in plenty of time, given that rush hour traffic wasn't as hideous as I thought it was going to be. My friend Gina arrived and one of the gambling buses arrived. As we were getting ready to board (the driver didn't have our reservation listed), another bus arrived. This one had the rest of our group on it. We boarded, I tried to get a picture of everyone but the camera decided to not cooperate, so there are no pictures of our intrepid knitters.

The gambling bus is an excellent deal. It costs $25, but they give you a voucher for $20 for gambling (redeemable for actual cash) and a $10 food voucher. The $5 "profit" pays for your entrance into the expo, if you have the $2 discount card.

Most of us had some knitting with us. I took Mom's sock and made good progress, although I had to knit and unknit the heel about three times because I just can't knit and talk or listen at the same time. 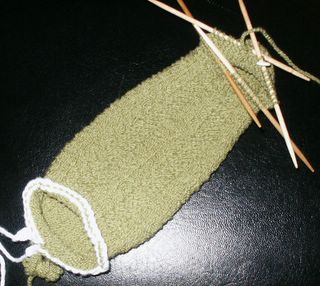 The photo doesn't do justice to the stitch pattern or the color.

After an uneventful trip (except for passing a hellatious car fire on the interstate), we arrived at Trump Plaza and went to redeem our vouchers. The casino reeked of smoke and there were some rather interesting-looking people playing the slots. I found the whole casino atmosphere to be rather depressing. The people didn't look happy; most had glazed expressions on their faces. The noise, the mirrors, and flashing lights were enough to drive me crazy, had we not beat a fast retreat to head over to the convention center.

My main goal for the expo (besides not spending a ton of money) was to find the Yarn Harlot, which was accomplished in short order. The Yarn Barn of Kansas was conventiently placed at the front of the expo hall and I nearly tripped over Stephanie before realizing I was in the right spot. She graciously signed both bookbookbooks, although she may have thought it strange that I was kneeling in front of her. No, I wasn't doing homage (although the thought had crossed my mind). I just felt like I was towering over her while she was sitting. I'm barely 5'2". I typically don't tower over people; I'm usually the toweree. But there you have it. I also felt like a blithering idiot or at least a blithering groupie. She was witty and funny and I was...well...dull.

Despite my vow that I wasn't going to buy anything (what planet did I think I was living on?), I bought a couple of items. There was a cute little pattern for making tiny baby booties and hats out of scrap sock yarn that would be perfect for the niece or nephew who will be arriving this winter (late winter, I might add). I bought two hat kits to make up for two of my nieces (tres expensive, but the kits included the needles). But my favorite purchase was a sock kit with silk/merino yarn in it (oh happy feet!), and 8 ounces of a gorgeous light brown baby alpaca fleece to spin. See? 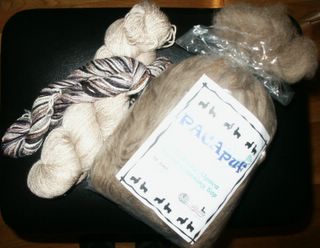 I forced let Yarn Harlot touch the alpaca. It is like touching a puff of warm, soft, silky air. I hope my spinning can do it justice.

The others in our happy band of knitters did a little bit of buying, too. Gina had the most stash enhancement, with yarn for socks, a sweater kit of Colinette yarns, skeins and skeins of yarn for a scarf made out of the most stunning mix of novelty yarns, couple of books, and two balls of qivuit. Nancy and Stephanie both scored with a kit for a cashmere something for only $60. They also each bought a very nice poncho kit from Philosopher's Wool.

I'll have Extreme Knitting content tomorrow. I promise. Now I have to go wash the kitchen floor. The cat is beginning to stick to it. I'd rather be knitting, though. I'm still on a yarn high!
Posted by Teri S. at 11:43 AM

What a great time you had! I'm looking forward to the day I can attend a Stitches. Thanks for giving me the chance to live vicariously through you!

Glad you had a great time! I felt the same way about towering over Stephanie when I met her for the first time!

I am SOOOO jelous!!! Not only did you get to fondle all that yarn, but you got to meet the Yarn Harlot! That is so cool!

I'm sorry we didn't get to meet. I was another 5'2"-er kneeling at the feet of the Yarn Harlot, at The Yarn Barn! On Friday!

And our casino bus went to Trump, too! Small knitter world.

But you got WAY more stuff than I did. I was "out of it", lucky for my Visa card.

I am working on my extreme knitting this week. Hopefully it will come to fruition!
Cathy