We had a little excitement chez Knitting Libran last night. I was engrossed in the pithy sidebar content over at Kerstin's when I noticed something fluttering overhead. "Moth" I thought, casually glancing up from the computer. Yikes, that's no moth! That's a bat!

I yelled for Tom and there we were, crouched on the floor, ducking as this beautiful brown bat was swooping around the kitchen (I hope it was eating some bugs). Tom tried guiding it out the door with a broom, but that didn't work. After what seemed like an eternity (during which the cat came in and was very interested in the bat), the bat found the exit and flew out. I have no idea how it got in. But they are perfectly silent little fliers. One of our favorite things to do in the spring and summer is to sit on the deck in the evening and wait for the bats to come out and then watch them as they flit about the yard. We had bats living behind the shutters on the upper level of our house and I could see them fly under there in the early morning to roost during the day. They are very fascinating creatures.

Volunteer
I heard from the Red Cross and will go through a volunteer orientation next Tuesday. I told them I wanted to be deployed but need to go through the shelter operations class before that happens. All of the current classes are full and they need to schedule more. It will be an interesting and, I hope, rewarding experience.

/Begin rant/ I am so frustrated with the Administration right now and their seeming insincerity. I mean, I'm very sorry that Trent Lott lost his beautiful old mansion. But he has the means to rebuild. Most of the people down there lost everything and don't have the means to rebuild (they couldn't even afford to leave). I'd rather see W. offer to help rebuild their houses and sit on their front porches instead of Lott's. That would show more compassion than simply telling the citizens of this nation to provide a tidal wave of compassion for the survivors of Katrina. That man, and his cronies, need to walk the walk. /End rant/

Knitting
The socks are done. See? 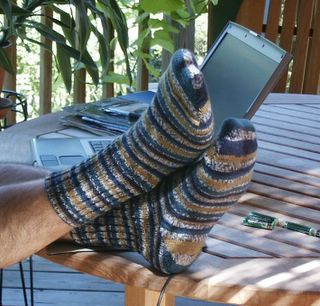 I'm rather pleased with the way they turned out, even though they are about an inch too short for his foot. I got the stripes to match up, except for bind-off on the toe. The Trekking XXL felt stiff to work with, but washed up very well; the socks are actually quite soft and fluffy now. It was a little chilly this morning and Tom wore the socks all morning. That made me feel good. The next socks are going to be made using Fortissima Colori (Socka Color) in what Tom calls Tibetan colors.

I've started swatching the baby blanket. I'm using Cascade Sierra on size 10 needles, but am unsure about the resulting fabric. I think it feels good, but it looks too...well...holey. Loose. Maybe I'll swatch on a size 9 and see what that looks like. I knit the nephew's scarf (also with Cascade Sierra) on size 7 needles and the stitch gauge is about the same. Go figure.

Job Update
I'm still unemployed and the more I think on it, the more I think I want to get out of the software business. I've come to the realization that technology doesn't excite me anymore. What does? Working with people. I get more excited about enabling people to do their jobs better or motivating them or coaching them than I do about writing and executing software test cases or writing technical documentation. I'm not happy with the trends that I'm seeing in the software industry. The thought of working mega-hours to get a product out the door in order to provide some amount of testing (but not nearly enough to know what the problems might be) and then turning around and doing it all again, well, makes my stomach turn. But what to do? So what can I do that capitalizes on my ability to work with people? Some of the areas that I've been turning over in my head (and need to research because it will involve additional education) is massage or physical therapy, nutrition, personal training, life coaching, or something dealing with fiber and people (yarn store, teaching?). Fortunately, I know people who either do each of these things or know people who know people who do them. It will be an interesting journey.

Extreme Knitting
The Extreme Knitting challenge is still going on, although folks have been awfully quiet lately. I was going to post another entry today but network problems prevented the photos from being uploaded. I'll try again with the next post.
Posted by Teri S. at 3:43 PM

I think bats are pretty cool, too, as are you & Tom for volunteering in the south.

Re: your rant...I'm disgusted, too. And I just keep hoping that more and more people are feeling the same. GWB has no idea what it's like to struggle, and is extremely insensitive. You wonder what's going to happen next.

I went on a canoe/camping trip with my Dad, brother, neice, husband and son last weekend, and actually packed my current sock in my waist pack to be photographed for the Extreme Knitting challenge, but I just couldn't bring myself to ask my brother (the one with the digital camera) to take a picture. The potential for him to tease me for the rest of my life was just too high.

Interesting, your choices of new careers. I'm in Telecommunications, so encounter some frustrations similar to those you'd have had in software, and have also thought along the lines of massage therapy or fibre-related jobs myself.

Bats are very cool, especially when they stay outside. They actually end up in people's houses fairly often.
I think the phrase "seeming insincerity" is inaccurate. I think the current administration is actually very insincere in their expressions of compassion for the disaster victims. That smirking little man that calls himself our president just needs to go away.
Oops. I'll go rant on my own blog.

Please know there are those of us that want to be an EXTEME KNITTER, but haven't quite had the opportunity. Have to find the right place and the right time.
Cathy

Wow, bats are cool! We missed them when were were in Carlsbad Caverns this Spring (they were still in Mexico). When I was in college, I used to watch them flit around at dusk. Glad yours made it out safely!

A BAT?!?!?! I'm glad it got out of the house before the cat got too involved!

Good for you, for volunteering!

I wish this administration would just TAKE a walk instead of walking it.

Those socks are beautiful! And the feet look like they're enjoying them.

Hi there, just jumping around the blogs looking for some ideas to improve my blog and landed on yours. I like the way you have laid it out. It has given me some good ideas, thanks. My blog isn’t up to much but I have a really good site. (It helps people achieve their Dreams). Check it out if you get the time :-) Anyway keep up the good work and I’ll try and get back here soon. Have a really good day.

I consider that you have a literal knack for publishing.
Genarally I read about 10 blogs a day, and skim about
20 more, so I mean it!

I'm going to be starting a website soon, about causes of pitting edema
(I know, it sounds strange!) but if you don't mind, I will drop
you a line just to obtain some advice.

I understand that causes of pitting edema has essentially nothing to
do with your blog but I really like your site and style of composing.

I hope that is Ok with you?

Thanks a lot.
JJ Currie

I've had a lovely visit at your blog, and an Extreme Knitting entry on my blog. Rant on!