The Thrill of Victory

Welcome to this next-to-last day of Olympic coverage! It's been quite the competition this year, Jim.

That's right, Bob. Of the 4,049 competitors, we've seen stunning successes and heartbreaking setbacks. Remember "the thrill of victory, the agony of defeat?" That's been so true during this competition as the knitters work through the difficult parts in their program.

Take for example, in the host nation, the organizer of this event, a superb knitter if there ever was one. Stephanie chose a gorgeous sweater to knit, not unlike her entry for the 2006 Knitting Olympics, which she finished just before the torch went out. This year, however, she's been plagued by little setbacks that have added up to being so far behind that it's anyone's guess as to whether she'll finish.

We'll definitely be rooting for her, Jim. And then there's Tee who pulled out of the competition after discovering a serious problem with the gauge of her project. She was gracious in her defeat, saying that the point of the challenge was to make a pretty sweater for her daughter, not to win a race.

And don't forget Carolyn, Bob. She chose a lace shawl for her competition, having never knit anything larger than a baby hat in 17 days. After barely starting, she was unhappy with her program and changed yarns, which obviously meant starting over. I'm happy to report that she finished Thursday night!

And what about one of the returning competitors? Here we have Teri, from Virginia. You competed in the 2006 Knitting Olympics, didn't you?

That's right. My project for that competition was a pair of Norwegian mittens. Unfortunately, I DNF'd, having completed only one mitten of the pair.

And for this year's competition, you chose to knit another stranded mitten, right?

Yes. I knew that I'd have difficulty with finishing the program before I even started, what with the lack of time to knit because of a challenging work schedule. My goal was to finish one mitten, with the catch being that the mitten needed to be designed by me.

That's quite a stretch, because this is your first foray into design, isn't it?

It was a stretch. Fortunately, I had already knitted a prototype mitten and was unhappy with certain aspects of the design. So all I needed to do was to modify it by removing a pattern repeat and changing the cuff pattern. The design was heavily influenced by some of Elizabeth Zimmeramann's mittens, and I chose to do a curled mitten tip and a striped thumb with a gusset, both new techniques for me.

Did you encounter any difficulties along the way?

Definitely! There were sections that needed to be ripped out and knitted again because I made mistakes in counting. The thumb gusset was problematic because I had no idea how many stitches I needed. The first go 'round would have produced a thumb of gargantuan proportions, so I had to rip back to the cuff, almost a third of the mitten. I was sure that that incident was going to take me out of the competition. But I persevered and eventually ended up with a thumb that works.

Weren't you thinking that you might exceed your goal and finish two mittens instead of one?

Yes. After a week into the competition, I was thinking that I might be able to finish a second mitten. However, the aforementioned gusset problem dashed those hopes.

But I'm happy to say that, despite twelve hour days at work, I finished my program! The knitting was finished Thursday night and the ends woven in last night. Overall, I'm pleased with the fit. The thumb is a little wonky, so the final pattern will need to be adjusted. It's truly been a great experience to design this mitten.

And for our viewers at home, here's the completed Vancouver mitten: 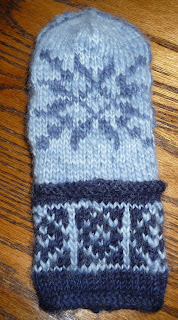 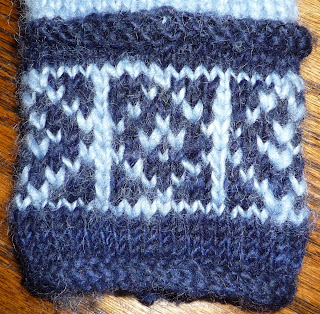 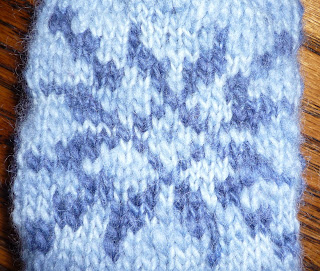 Thanks for taking the time to talk to us, Teri. Congratulations on your winning performance!

Thank you. It's been a pleasure.

Well, Jim, that wraps up today's coverage. Good luck to all the Knitting Olympians who are still working to finish their projects!
Posted by Teri S. at 11:49 AM

Gold medal worthy to be sure!