More Than I Thought

All last week, there had been rumors of another significant snowfall here in Virginia, something along the lines of the December 19th storm. That storm dropped about 20 inches of snow right before Christmas, wreaking havoc for those of us who don't start Christmas shopping until the week before. (For your information, that would not include me. I do all my shopping online.)

So when this storm was forming, I started watching the NOAA web site. On Thursday, a friend sent me a link to this weather site and I never looked back. I started obsessively watching the forecast and how it was changing and why (I swear I should have been some kind of scientist).

Anyway, to make a long story short, the National Weather Service (NWS) kept changing their total accumulation estimates. It started out as 12 inches, then it was 12-18, then it was 18-24. They finally settled on 20-30 inches, with potentially more than 30 inches at higher elevations. The NWS issued a winter storm warning that was in effect from 10 a.m. Friday to 10 p.m. Saturday.

The region started the standard typical emergency preparations: buying more milk, eggs, and toilet paper than a family could possibly use in a month. My sole purchase was a pair of ski pants, because if we really got that much snow, I'd need something to keep me dry while digging out. 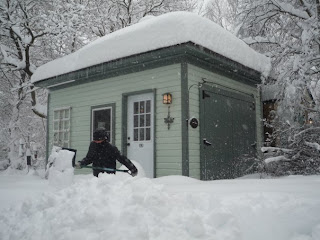 Digging a path to Tom's office
The snow started at 10 a.m. on Friday, right on time. By the time it stopped Saturday afternoon, we had an amazing 34.5 inches of snow on the ground! That's the largest single snowfall I've ever experienced. We started shoveling Friday night, trying to "keep ahead" but it was all for naught. By Saturday morning, it looked like we hadn't shoveled at all.

The snow is somewhat wet and heavy and we lost a large branch from the maple in the front yard (which happened to fall on my car; fortunately, the car wasn't damaged). 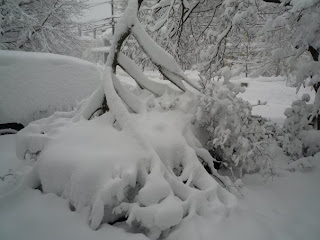 Where's the Volvo?
A large branch also broke off the cedar in the back yard, damaging the windshield wipers on the Westfalia. We were fortunate in that we didn't lose power, unlike a lot of people (including my mother-in-law) in the region. It's supposed to get very cold tonight, about 8 degrees, so Tom might have to go get his mother and bring her here until power is restored.

We walked around town yesterday and some of the roads are okay and some are not. They've already closed schools for Monday and Tuesday, but I suspect that with the cold temperatures and the remoteness of some of the bus routes, the schools are going to be closed all week, especially since they are calling for another snowstorm on Tuesday and Wednesday. Here are some pictures that Tom took while we were on walkabout: 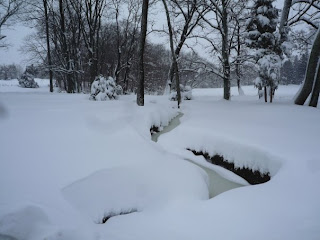 A stream at Morven Park 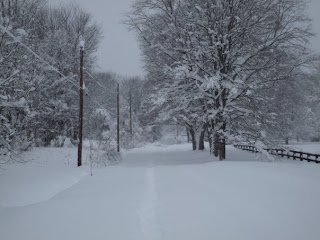 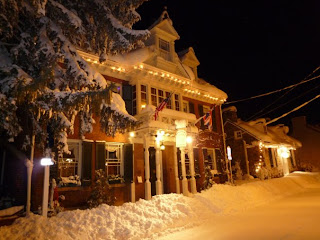 A local Bed & Breakfast
So, has this snow event left me time for knitting?

However, I hope to get some knitting time in today and with luck, should finish the hand of the mitten. I was almost finished with the pattern on the hand when I discovered a mistake about five rows down that had to be fixed. I'm back on track, though, and the first mitten should be finished in relatively short order. Then it's on to the second mitten, where I'll need to decide if I want to tweak the pattern a bit, which will mean that I'll have to rip out the first mitten and re-knit it to match the second mitten. It's really cold and these mittens are going to be very warm. I suppose I could wear subtlety mismatched mittens until the worst of the weather is over. Or I could declare both mittens to be prototypes and then knit them again in a yarn that will better show the pattern.