Still Lazy After All These Years

When it comes right down to it, I'm lazy. Just ask my parents. And even though I'm now an adult, I'm still lazy! My life would be so much more organized if I'd just complete the tasks that I started. For example, there's a huge mound of clean laundry in the basement, waiting to be folded. Instead of folding it as it comes out of the dryer, I dump it on the table to be folded later, which eventually gets done. But in the meantime, my morning routine includes scurrying to the basement and routing through the laundry to find the clothes that I need for the day. But the mountain continues to grow.

So yesterday was a somewhat lazy day. I managed to get my butt out the door for the club run. There are typically slower runners at each run. Imagine my chagrin when I discovered that I was the slowest runner. I felt like turning around and slinking home because I had no one to play with. It turned out alright, though. Diane and Christy hung back with me, then we met Tierney coming back from the long run, so I turned around and walked back with her. We headed to the Leesburg Restaurant for breakfast, as rumor had it that's where the long runners went. The Leesburg Restaurant is probably the oldest restaurant in town and serves typical diner fare. It still has the original bar, stools, and booths from the 1930s, and fortunately none of the more recent owners have decided to renovate the interior. It still has all of the Art Deco touches that it had when it opened, although they are looking their age.

The food is pretty good; I ordered Eastern Shore Eggs, which was a split English muffin with each half topped with spinach, a crab cake, and a poached egg, and lightly sauced with Hollandaise and a sprinkling of Old Bay. It was quite tasty, although the crab cakes were very gloppy. They were fine with eggs on top, but I would not have wanted to eat them by themselves or in a sandwich.

So far, so good. A morning run, breakfast, then back to the house for chores. Except that Tom took a rather long nap, which gave me an excuse for futzing around on the computer. I did manage to pick up a book at the library and do a grocery shopping. But the laundry didn't get washed and the existing laundry wasn't folded.
Oh well...

P-la, you mentioned you were looking for a butternut squash recipe. My mother wanted to pass this along to you. She clipped it from a GE Profile ad in a magazine.

Preheat oven to 450 degrees (Fahrenheit). Season squash with salt and pepper and drizzle with EVOO. Place on a rimmed cookie sheet. Bake in oven until tender, about 18-20 minutes.

Stir together 4 Tablespoons EVOO, the vinegar, onion, chili flakes, oregano, garlic and season with salt and pepper. When squash is done, remove from oven and pour the marinade over the squash. Cool for 20 minutes. Sprinkle with the mint and serve. Serves 8.

The recipe can be made earlier in the day and should not be refrigerated.

Mom said that she halves the recipe, since it's only her and Dad and the occasional son who might show up for dinner.

Puff the Magic...Cat?
Emma went on walkabout yesterday (supervised, of course) and met the neighbor's cat through the fence. She wasn't too pleased. 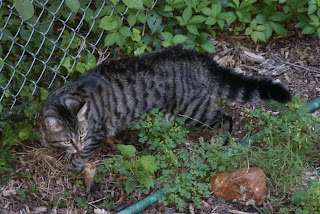 Ooh, please thank your Mom for the recipe! I have printed it out and am drooling already!

Your breakfast sounds good. I would have never dreamed of putting all those things together, but the more I think about it, the more it sounds delish!

I factor in the extra time in the morning in order that I might root through the unfolded clothing pile. I don't know what I'd do with all that extra time should the clothing be in the drawers like Mom says it should be. I prefer to think of the whole thing as a "system."