No Time to Blog

Or so it seems. Much has happened since I last posted an entry. Life at work has been fairly busy, and my father had back surgery (he seems to be recovering well, thank you), which necessitated a trip home last weekend. We've been watching the new Ken Burns documentary, The War, which is very good, but very long.

And the Yarn Harlot came to town. See? 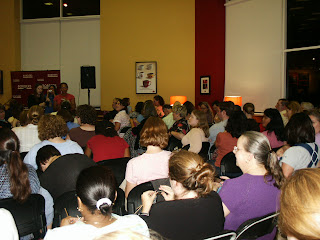 She's not there. That's the crowd, which from the back looked small-ish. But there were over 175 of us there (at least that's how many were in line for the book signing). I stayed with the knitters, way in the back, despite having arrived 75 minutes before the talk started. I didn't get a chance to see how the non-knitting customers were handling the invasion of the knitters. Finally, Stephanie appeared: 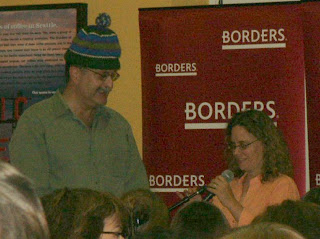 She talked for almost two hours and was funny in a very understated way. The room was howling with laughter for the most part. But Stephanie talked about serious things, too. Like how knitting as a business is underestimated by banks (witness the problem that Blue Moon Fiber Arts had with their original bank thinking that the Rockin' Sock Club was a fraud because how could 2000 people want to buy sock yarn? Or the problem that another yarn shop had getting a mortage for a warehouse for its expanding business because the bank, despite at 50% down payment and a strong business plan and year-over-year growth, thought that the business was "implausible.") She also talked about the generosity of knitters, as demonstrated by the amount of money that we've raised for Doctors without Borders.

After talking for so long, Stephanie then signed books. And signed them, and signed them, and signed them. My friend and I were numbers 107 and 109 in the line (thanks to Anne's alertness, she discovered there was a line in which to get numbers; I never saw it, so intent was I on obtaining and retaining our seats). So I knit on Clapotis while waiting and eventually met a couple of other knitters (yes, I'm shy, even when surrounded by my own kind), Nicole and Lee. I managed to complete several repeats on Clapotis and finally, after waiting until about 10:30 or so, our numbers were called. Oh boy! We get to join the line. The line moved relatively quickly and soon I was standing before the Yarn Harlot herself. We chatted, but I think all that the only sounds that I managed to get out of my mouth were "Ergh", "Ahhh", and several other unintelligble articulations (I was beyond feeling exhausted at that point, having been up since 5:30 a.m. and not having had dinner). Stephanie, to her credit, was witty, articulate, gracious, and poised, as you can see: 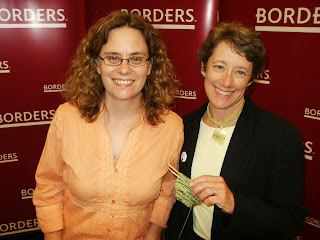 As I was getting ready to leave, another group of 25 or 50 knitters appeared and Stephanie collapsed on the table, exclaiming "More?!" Poor Stephanie. Such are the wages of fame. Fortunately, the traffic going home was not so bad and I got home a little after midnight.

Knitting News
Clapotis is moving right along. I've finished knitting straight and have just started knitting the decrease rows. It looks like I'm set to have another finished object by the end of the year. I'm still loving the yarn and the pattern. My only regret is that the Duet seems to shed, making this shawl not very practical to wear with black. Oh well...I guess I'll be brushing mohair off my suits and coats.

Stitches East
Stitches East is only two short weeks away. Once again, I've signed up for a full slate of classes, from Thursday afternoon to Sunday afternoon. These are the classes I'm taking:

I thought I had signed up for a class on short rows, but either it filled up before they got to me or else I bumped it for a class I thought was more important. The class that I feel is most important to me is Color for Knitters. Color scares me and I'm hoping that this one-day workshop will give me the confidence that I need to use color creatively and intelligently. And maybe then I'll take the plunge into dyeing.

October is shaping up to be a busy month. Tom is running the Steamtown Marathon next weekend, the following weekend is Stitches East, then I'm home for a weekend. Hunt Country Yarns has its annual Pajama Party the weekend before Halloween, and I'll be going. And I'll be missing two fiber festivals in Virginia. October should be designated Fiber Month.

That's it for now. Time to go do some housework before the day is all used up.

My goodness what a schedule you have! I'm glad you got to see the Harlot. Skitter and I drove from Dallas to Oklahoma City to see her. It was well worth it!

Wow! You got to see The Harlot? I ooze with jealousy over here... She came to Maine once upon a time ago but it was before I knew who she was and I couldn't understand why everyone was all agog. Now that I'm agogging all over the place, she is nowhere to be seen. ::sigh::

OH MAN! you are a busy busy lady! and look at you w/ Harlot! :) i'm jelaous! i missed out on the drive w/ purling Pirate and skitter b/c i was stuck at work! BOO! :)

I completely agree with sheepish annie. I didn't "get it" until Reading Yarn Harlot : secret life of a knitter which made me laugh, at times cry, and provided tons of knitting encouragement!

Teri I have another question for you that is less related to knitting and more related to your culinary experiences. For my gourmet club we are cooking French cuisine. I have never cooked anything other than french fries and french toast...and crepes once. Anyway, can you suggest some resources (books, websites, instructions, etc.)? Keep in mind it should be fairly basic too.

P.S. the Indian spices are so yummy and they don't smell anything like the spices I buy from the store! We made Vegetarian curry the other night. Leftovers from those meals make me so happy! I will check out the book you mentioned - thanks!

It was great to meet you at the Harlot signing and I hope we can rendez-vous at Stitches. I want to see the progress on Clapotis.