A Simple Twist of Fate

Yesterday turned out to be a lot of fun, despite the nagging migraine that developed in the morning. Yoga class was fantastic and I was pleasantly surprised to see one of my former neighbors in it. My muscles are pleasantly sore, which never happens when I'm practicing on my own.

The trip to the farmers market was also full of surprises. By the time I arrived (after yoga class), they were sold out of a lot of items. I saw the same former neighbor who is in my yoga class. And then I bumped into my running partner, Lorrie, who I haven't seen in what seems like forever. We've been thinking about each other a lot but never pick up the phone to call (she works nights, I work days). We set a running date for Thursday. It will be good to catch up with her.

Then it was on to the housewarming. As I suspected, I knew only one other person there. He brought his wife and kids and we made small chitchat. Then Steve let it drop that Pam had a loom. Hey, I have a loom, too! Well, that just started the conversation flowing. She also has a spinning wheel. She doesn't knit, though, but that's perfectly okay. It was such an unexpected and nice surprise to meet someone who shares the same esoteric hobbies as I do. I hope we keep in touch.

Knitting News
I made a little bit of progress on the second Simple Stockinette sock. The toe is actually looking toe-like. 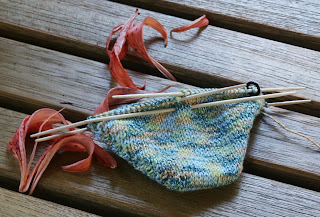 I don't think I'll have much time to work on it today. Said former neighbor is allegedly coming over around noon to finally see the kitchen renovations (it's only been three and half years) and I have cleaning and laundry and menu planning to do. That also means that I won't have any spinning time, either, or time to continue working on entering the stash in Ravelry. I started entering the WIPs, though, since it doesn't require taking new pictures. And I might start entering the FOs for the same reason. This Ravelry project is taking my organizational skills (random at best) to new heights.

Emma doesn't care so much about Ravelry. She says "I've got me some bugs to catch!" 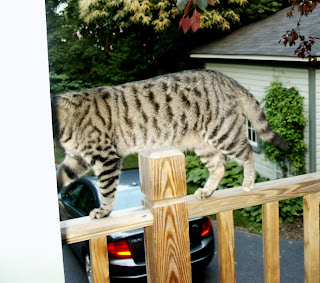 I never put myself on the waiting list for Ravelry because it sounded more like work...which I kind of don't care for. :) Now I'm thinking I need to look into it. Everyone seems to be having so much fun with it!!

Glad your day went so well! It's always fun to run into old friends. Or make new ones with compatible hobbies! How is it I didn't know you have a loom????? I usually remember these sorts of things...

I love running into people I know! It so rarely happens here but I always get a jolt when it does.
I am loving Ravelry too. Need to find time to take a bunch of pictures though.
Time get pretty short around here dealing with a 2 year old Squid! And by the time he goes to bed, I'm exhausted!

Cats have a way of putting you in your place don't they. Does Emma prefer crickets or flies? Mimi likes flies.