Organized (in spite of myself)

I spent another weekend with Miss Val, organizing my workroom. I'm happy to report that we're done! Yippee!

Here are some before pictures: 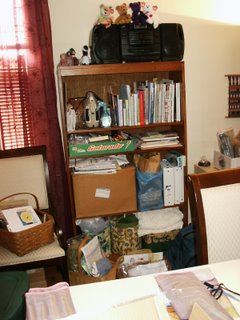 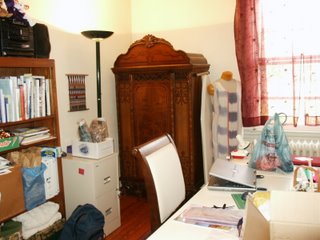 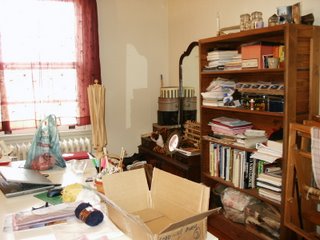 Now, I wouldn't describe myself as "unorganized." I would say, though, that my organization quickly devolves into disorganization or, as these pictures suggest, chaos. Really, it's much easier to leave things out if I know (or even think) that I'll be using them again.

After spending 19 hours working on this room, including the closets and filing cabinet, we ended up with one box and three large bags for charity, one large bag of trash, one large box of recyclables, and various piles that needed to go elsewhere in the house. And I was left with this: 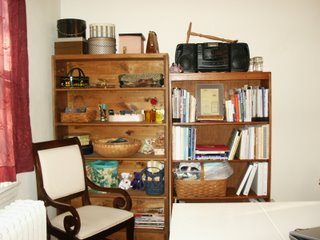 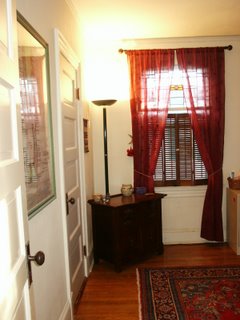 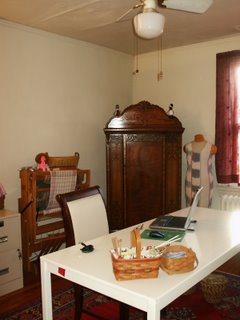 Every time I walk past the room, I look in and say "Ahhh..." It feels more spacious, the energy flows better, and it's just good. But I did have to rein in Val a little bit. When it came time to organize the stash, she looked at my one stash box (and its overflow) and kept asking "Isn't there anything in there you can get rid of? Maybe some old yarn?" Nope, every bit of the stash stays. It took every ounce of my self-control to not pull out every skein, thrust it in her hands and say "Here, feel this. Isn't it wonderful?" (I only did it once or twice).

I must say, though, that it's rather sad that I couldn't do this organization project by myself. I think it was too overwhelming and I was only thinking along two lines: throw it out or give it away. For some things, particularly some of the things that came from my grandmother's house, I needed someone who understood the emotional attachment and who could gently detach me from that attachment and get me to realize that it was good to give it to someone who would get better use of the objects than I would. Thanks, Miss Val!

Because of the whirlwind of organization this weekend, not much knitting was accomplished. I started swatching for the next baby blanket. I'm considering using Indicieta, a sport weight alpaca yarn by Plymouth. I'm not sure that I like it...yet. The swatch needs to get bigger than one row. The sleeve to the Lace-edged Cardigan is slowly but surely growing. It's about six inches long right now and I've had no signficant cabling accidents. I think it will turn out rather well. I'll post pictures next time...after I replace the batteries in the camera.
Posted by Teri S. at 8:43 PM

Nice work on the room! I've been tossing my craft room recently, too, and it's getting worse before it's getting better, but I definitely see a light at the end of the tunnel. :)
Also, I used the Indicieta alpaca for my sister's DNA scarf. It was nice to work with and felt really soft to my hands, but up against neck skin it was a little prickly. Just my 2 cents. :)

Nono, you did it right, bringing in someone to help. You should never do your own orginazing, at least not alone. It is so easy to say to yourself "I might need this again someday" even if you know it will never happen. If you have someone else around, then you have to justify keeping stuff, and they can make it eaiser to throw stuff out...unless they threaten your stash. Then you leave the room messy,s o you can hide the body!