As of 7:30 p.m. on May 3, I officially started my long-awaited vacation and I won't go back to work until So far, it's been wonderful, although not necessarily restful. I completed Maggie Casey's two-day Learn to Spin class yesterday. It was wonderful and I learned so much. I'm not a bad spinner but my drafting repertoire was limited and hampered my ability to spin different fiber preparations. I think my drafting technique was a cross between the long backwards draw and the short forward draw. Now I know how to do both properly, although the forward short draw was a bit of a challenge, kind of like patting your head while rubbing your tummy.

At one point in class yesterday, I felt like I was fighting with my wheel...the spinning became difficult. Maggie replaced the existing drive band with a lighter one and that made a huge difference. Who knew? Suddenly, spinning top and combed fibers became much easier.

And the piece de resistance...I learned how to do a chained ply (and when to do it). I had read instructions and looked at illustrations and they didn't make any sense. But seeing the technique demonstrated made all the difference in the world. I'll probably practice on leftover singles. Ha! And then maybe I'll actually knit some of my hand-spun. That would be a first.

The biggest benefit from taking Maggie's class is that now I have the confidence to spin any fiber without fearing that I'll ruin it. That's a giant step forward for me.

Knitting Progress
Not much knitting going on lately. I've realized that if I want to knit every day, I'm going to have to approach my knitting (and spinning) like I do exercise: first thing in the morning. I have great intentions to knit every evening after work, but by the time I get home at night and eat dinner, it's time to go to bed. I'm not particularly thrilled with staying up after feeding the cats at 5:00 a.m. but I think that's what it's going to take.

I'm almost to the first sleeve on Corinne. But with Squam just a mere three weeks away, I need to increase my knitting time by a lot, or else I'm not going to have a new sweater to wear.

As far as the stealth project is concerned, I haven't even finished swatching for it. That's bad; I'm behind before I've even started.

Maryland Sheep and Wool
Tomorrow I'm meeting a friend at MD$W. My initial goal was to just hang out with her and vicariously enjoy her purchases. But I'm beginning to feel the siren call of the fleeces and yarns. And spinning wheels. I do need a new threading hook so I might look for a pretty one. And buttons...I need some buttons for Corinne. I also realized that my body doesn't like spinning all day on a single treadle wheel, so after Gina goes home, I might sample different wheels. And no, a new spinning wheel is not going to follow me home. I need to make sure that I'm actually going to be spinning enough to make the investment. And I want to make sure that I buy the right wheel. Does anyone have any recommendations for a double treadle wheel?

In closing, here's Bosco doing one of his three favorite things: 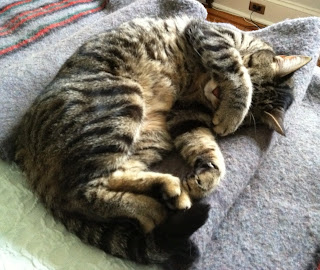 The other two? Eating and hunting for voles.

Have a great weekend and happy knitting!
Posted by Teri S. at 8:02 PM

Spinning..this is the activity done by the woman in Rumpelstiltskin, spinning hay into gold. Is the spinning device still the same where there is a wheel and is made of wood?