These Things Are Sharp!

True to my word, I finished the first Gentleman's Fancy Sock. I had enough yarn, thanks to the liberal application of toe decreases. Here's the sock, next to the remains of the ball (all 19 inches of it). 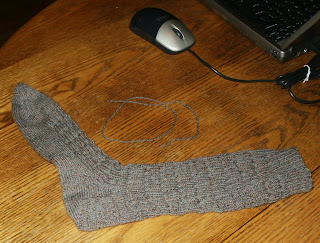 That was cutting it a little too close for comfort.

I felt total love for the first sock, although I didn't quite feel the love for the yarn. It was a bit splitty on 2.0mm metal needles. But I survived and the sock survived. Not too many stitches leapt from the needles, which was a pleasant surprise given how slippery they are. And even though the needles have sharp points on them, I suffered nary a scratch (although I came close to poking one or two eyeballs out). As soon as I finished weaving in the ends, I pulled out the second ball and cast on for sock the second.

I'm not feeling the love for the second sock. The yarn is being cantankerous. It's sliding off the needles, splitting beyond imagination, and is being totally uncooperative. Maybe it's a bit miffed that I knit an inch of cuff with it about a year ago (swatching, don't cha know) and then abandoned it. It took three attempts with casting on before I was able to start knitting the cuff.

But what's worse is that the needles seem to be in cahoots with the yarn. They work themselves to the beginning of the knitting and then the stitches leap free. The points seem to have gotten sharper, leading, dear readers, to a small laceration on my left index finger. I'm left-handed and control the yarn with my left hand. To keep a nice, even tension, I work with the needles and yarn very close to my fingers. Every time I work a stitch, the needle lightly grazes my index finger, creating a small callus over time. This time, however, the needle viciously dug into my finger with each stitch, oblivious to the protection that the callus afforded. After about 12 rows, I surrendered decided it was wise to set the sock aside to allow my finger to heal. 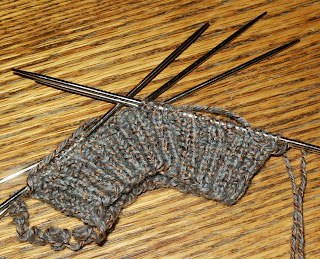 That doesn't mean there won't be any knitting for a while. I'm switching to a different project; one where the needles aren't metal or aren't so pointy. I'm resurrecting the Monkey sock (knit, thankfully, on wood needles) and am having another go at the Counterpoised Shawl, which is knit on metal needles but the needles are much larger and therefore should not have the potential for laceration that the DPNs have. Before I continue with Counterpoised, though, it might have to be frogged. The stitch count is off on the current row and I cannot for the life of me find the mistake. 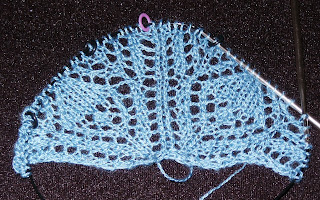 Now it's off to bed. I've got an early and busy morning tomorrow: two sets of cats to feed, coffee to make for the husband, macaroni and cheese to make for the family Thanksgiving feast, and a four-hour road trip.
Posted by Teri S. at 10:54 PM

I'm using sticky, dull, wooden needles these days...too many injuries with the metal ones! I hope the finger heals soon. No fun having a boo-boo on a knitting finger!

Have a great Thanksgiving!