Yesterday started early (4:30 a.m) and cold (28 degrees according to one bank sign). I can hear you thinking "What in the blue blazes were you doing up that early?" Not much; just getting ready to crew for Tom as he ran the JFK 50.

The running club had four runners participating. Each had trained all summer and fall for this event. The course is somewhat difficult, both physically (13 miles are run on the Appalachian Trail) and mentally (27.3 miles are run on the C&O Canal towpath). There are two starts, one at 5:00 a.m. for the slower runners and another at 7:00 a.m. for the "regular" runners. All runners have until 7:00 p.m. to be off the course. Tom once again opted for the 7:00 start.

After gathering at the Boonsboro High School gymnasium and listening to the instructions, runners and their support crew walked the one kilometer to the start line (the stop light in town). The gun went off right at 7:00 and they were off and running! I'd see Tom and the others at Gathland State Park, about nine miles into the race. Because of the number of spectators, parking at all of the viewing points presents challenges, especially since the roads are narrow and shoulders are mostly non-existent. Add to that the presence of trees, rocks, and Civil War-era stone walls and parking can be as much of a challenge as running! I got to the park in enough time to see the front runners come through. They were flying (the winner finished the race in 5:50:34; that's a 6:59 pace over 50 miles!). Our runners came through (considerably behind the front runners) and looked strong. After we saw the last one off, we packed up and headed to the next stop.

The second stop, at Weverton Cliffs, is where the runners come off the Appalachian Trail for a brief period. Most take some time to change out of their trail shoes into their running shoes because the towpath is a much softer surface. They also take the opportunity to eat something (Tom's fuel of choice these days is Ensure). Once again, all our runners looked strong, although the distance between them was beginning to spread out more. Jill was flying, Tom was running strong, Phil was looking good, but taking his time, and Casey had slowed down a bit because she took a rather hard fall on the trail (lots of people trip over roots, rocks, and slip on wet leaves). After Casey left, it was on to the next stop at mile 27.1.

The third stop was at the Antietam Aqueduct and is one of the places where you can start to see runners getting tired. Jill, our fastest runner, was visibly hurting as she came through this stop; Pat started running with her at this point. Tom was still looking good, but said his feet hurt. Phil had fallen behind somewhat but was still looking good; he said he was just taking it slow. Casey had also slowed but she was still smiling and energetic. Mike (one of her crew members) donned his running shoes and took off with her, giving her a boost. Next stop: Taylors Landing, the "38 Special" stop.

To get to Taylors Landing, you must drive past some of the Antietam Battlefield. It's incredible that such a beautiful, peaceful area saw such a terrible, terrible battle. As I drove past, I thought of all the men and women whose lives were forever changed by the war. My great-great-grandfather was at Antietam and it felt strange to know that I was seeing the same land on which he once walked.

Parking was extremely difficult at this stop; fortunately, they had Park Service personnel and race volunteers to direct people. As I was walking toward the aid station, I saw Jill fly by; it looked like she had recovered nicely (it would also be the last time I saw Jill until the finish). Tom came by a little while later and still looked good, although he said he was beginning to tire. I waited for Phil and Casey to come by but they didn't arrive before I had to leave to get to the next stop, at mile 46.

I arrived at mile 46 and had about a 10-minute wait before Tom came by. I thought he was looking pretty good, but he said he was very tired. Then he was gone. I'd see him next as he crossed the finish line in Williamsport, Maryland.

We saw Phil sitting in the lobby of the middle school where the post-race activities were being held. How did he pull that off? It turned out that he missed the time cut-off at mile 34 and was pulled from the course. That is such a disappointment, but he seemed to take it in stride.

After Tom had a quick shower and grabbed some sustenance that wasn't GU or Ensure, we headed outside to wait for Casey. She crossed the finish line in 11:36:42, although when she saw us, she thought we were the finish line. After running 50 miles and going that long, you are easily confused. One older gentleman turned off the course and headed toward the school, thinking the finish line was there. The spectators corrected him and he made it across the finish line safely.

Congratulations to all the runners of the 45th Annual John F. Kennedy 50 Mile Race!

Knitting Progress
Given that the greater part of yesterday was taken to standing around waiting for the runners to come by, you'd think that I'd have finished the sock and started its mate. Not so. With the temperatures hovering in the low 40s most of the day, my hands stayed encased in wool mittens (sadly, store-bought). The thought of knitting on 2.0mm metal needles was not a pleasant one, so the sock never saw the light of day, even though it was my constant companion. And no, I don't have any traveling sock pictures. I didn't think about it and I was using a camera that used real film. How quaint. And how frustrating not to know if the pictures you took are any good until after the film is developed!

That said, I predict the first sock will be completed today. I'm so close to finishing. I'm still worried about having enough yarn. This is how much is left: 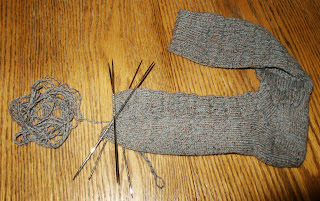 What do you think? I've got 12 more rows to knit, plus grafting.

Surprise!
When we got home last night, there was a package from Wooly Wonka Fibers on the doorstep. I eagerly ripped it open to see what wonderful exotic fiber Anne choose for us this month. I found this: 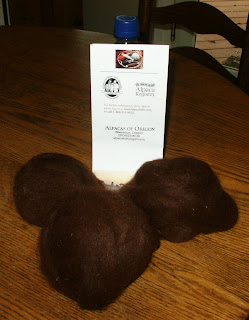 Alpaca in the most beautiful chocolate brown. The pattern included for this fiber is a lace shawl pattern by Miriam. Hoo boy...is this ever going to test my spinning and knitting ability! I think I'll not attempt to spin this until after I take the spinning class that's offered at Maryland Sheep and Wool. My fear of spinning yummy fibers is akin to my fear of cutting into cloth...you've only got one chance to get it right. Once the fiber is spun, it can't be unspun and spun again.

So, today will be spent finishing the sock and doing some quiet activities around the house (yesterday sort of drained me, given that I forgot to pack food for me). Maybe, just maybe, if I'm a good girl and finish the sock, I'll pull out my wheel and spin a bit!

And Finally
I want to thank everyone for your concern and good wishes during my thyroid scare. It meant a lot to me, especially during the last biopsy. I finally met with the holistic physician (she spent over an hour with me) and she identified additional mineral deficiencies that are probably contributing factors to the thyroid dysfunction. So, while the fix might not be fast or easy, I'm confident that there will be fix. The journey to health continues, and it will be an interesting one.

50 miles!!! That is amazing! It is sort of like my morning commute only I get to drive and drink coffee...I can't imaging running it. Great job, Tom!

And I'm loving the sock...great job there, too!

Now, I think I need to go check my mail. I didn't know that there was a package heading my way. Must go snuggle up with that alpaca!

How nice that you got to enjoy the scenic journey while everyone was running! Glad they all finished safely.