I can't say that I consciously planned it that way, but the majority of my Julia dinner on Sunday was almost all local. Here's the menu:

The chicken, tarragon, cucumbers, blueberries, and salad tomatoes were local. Unfortunately, the potatoes, milk, cheese, flour, bread, and mushrooms were not. But still, the main ingredients were local. Every little bit helps!

I started cooking around 12:30 on Sunday, about 30 minutes behind schedule. I prepared the "order of battle" (a phrase the Julia is fond of using and one that I find amusing), working backwards from serving time (7:30) to determine when the various dishes needed to be in the ovens and working back from that, when I could start prepping them. Despite a late start, everything went as planned. I even had time to clean up as I went (anyone who has watched me cook a multi-dish meal knows that the kitchen tends to look like a war zone when I'm done). In fact, the meal was ready a little early, which was surprising. The last minute preparation for the chicken (carving and sauce preparation) did leave the kitchen looking like it had exploded, but that's okay.

And how was the food? Well, given that I tend towards flavorful ethnic cuisines (Indian, Thai, Mexican), I thought the dishes were a bit on the bland side. However, the canapes and cucumbers met with rave reviews. The chicken was a bit dry, despite being baked in a casserole. Since it was a free-range chicken, it was more lean than the grocery store variety and I think I overcooked it (the meat had drawn away from the leg bones). The sauce wasn't as thick as I would have liked it to be, but it was very good. And the clafouti was excellent. It's not like a Mexican flan, which is essentially an egg custard. The clafouti is more like a pancake batter that bakes into a thick cake which lacks the crumb of a traditional cake.

To continue on with the Julia theme, I made Potage Parmentier for dinner last night. That would be potato and leek soup. It was tasty, but much thinner than I was expecting; we tend to make our soups thick. It's very easy to make...just take water, sliced leeks, chopped potatoes, and salt, and simmer them until everything is tender. Pass through a food mill or mash with a fork, add a little bit of cream or butter and serve.

So, that's my Julia experience. Time-consuming, tasty, and possibly worth the time. I'm going to have to work on refining my execution of the recipes.

Knitting Progress
The Simple Stockinette sock is coming right along and I've got about an inch and a half before starting the cuff. See? 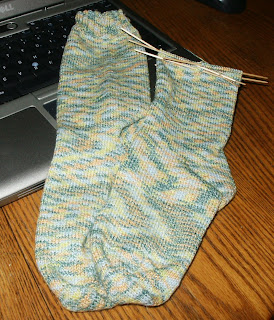 I predict I'll have another FO by week's end. Yippee! Of course, that leaves me with a little bit of a problem. What do I knit next? I need your help, especially since this project is going to be a travel project (we're headed to South Dakota next week for the Lean Horse Ultramarathon). Therefore, the project must be relatively simple, but engaging, and portable. Your choices are: 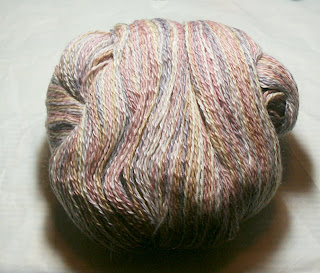 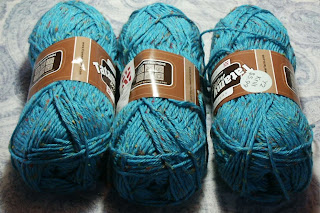 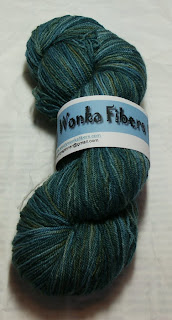 Come to think of it, maybe I should take two projects, a sock for the plane and something else for other knitting. Heaven forbid that I get bored knitting just one project!

I'll post the results of your votes this weekend.
Posted by Teri S. at 7:27 AM

Your dinner sounds divine! I never get my timing right! Ever! I can't tell you how many times we ended up eating our meal in courses just because things were still cooking.

Hmmm..tough choice on the knits. I would take one simple and one a bit more complex. I'm not sure what some of the patterns look like, so I don't want to vote. (Well, except to say I want to see the Clap done in Brooks farm! Skittermagoo did one and it was gorgeous!)

Yum! That sounds wonderful. Especially the blueberry flan.
Clapotis in Brooks Farm! I have some myself that I got at the MDS&W two years ago and STILL haven't made it. I wanna live vicariously through you. Then for your sock I vote for the Shingle Creek Trail socks. That is pretty yarn!

Ive not knit one, but I hear good things about Clapotis. Everyone seems to find it very engaging travel knitting. But I'd never leave the house without a "back-up sock!" Just in case...

Dude, my stomach is GROWLING now! Your meal sounds divine . . . and very complicated!

Clapotis! Clapotis! Wanna know what my vote is? ;) NanC made a vest of of the BF duet, and it was luscious! She even let me knit a few stitches on it, and now I must buy some Duet of my own.

And of course, a "backup sock".

Dinner sounded wonderful!!! I love to eat like that, and could see doing that every blue moon or so, but can you imagine cooking like that every night??? I think you did a fantastic job!!