Yes, Virginia, There is Knitting

This last month or so has produced precious little in the way of knitting. The girl's sweaters are progressing oh so slowly, and it will be a miracle if I finish them before my nieces start producing grand-nieces and nephews (for the record, my nieces are four and five). This gives you some idea of just how slow I'm moving on the sweaters. 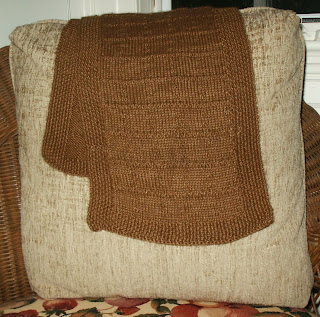 I'm mostly pleased with the way it turned out, but I incorporated an extra stitch that sort of bothers me. However, I'm not going to rip it out. The ends need to woven in and the scarf blocked, but I'm considering it finished (for the most part). 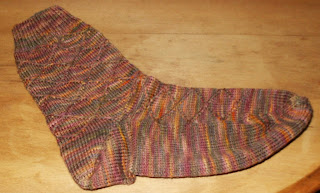 Again, I'm mostly pleased with the way it turned out, but it has a couple of issues. The pattern is not centered on the instep and the sock doesn't fit as snugly as I would like it to. I was thinkingif I removed the "extra" stitches if the pattern would magically center on the instep and improve the fit. I think there's going to be some additional swatching in my future.

I've come to the conclusion that I'm not really a knitter. If I were a real knitter, I'd have many more finished objects. I'm a wannabe knitter (and spinner). I buy yarn, patterns, and have all these grandiose schemes for designing my own sweaters and socks, but when it comes right down to it, I just can't seem to execute. I start projects, then cast them aside for the thrill of starting something new, which then is cast aside to start something else. Perhaps I suffer from a knitterly form of ADD.

And then there's this: I waste time (that's a big surprise, eh, Mom?). And I'm lazy. I can always find ways to stretch out a task, not because I want to prolong it, but because I get distracted. If I'm straightening a room, I'll pick up a book and and hour later, find myself still flipping through the pages. It's enough to drive a professional organizer crazy!

What I ought to do is set aside a little time every day to knit and spin. When the time is up, the time is up, and I move to the next task. I don't have a lot of hope for that actually happening, but I'll report back on my progress.

Room Renovations
Remember I mentioned that we decided to finally renovate the back bedroom? The plasterer finished up yesterday. Here are some before pictures: 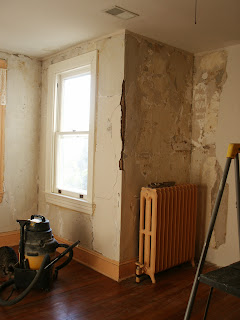 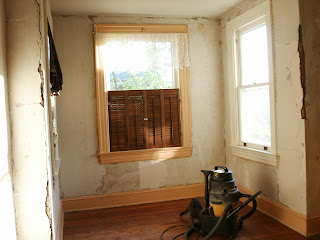 Now you see them: 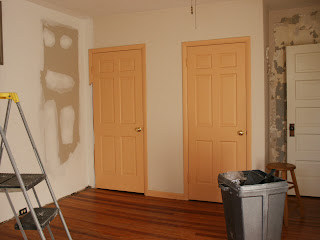 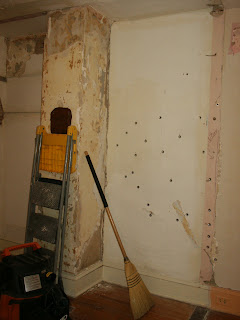 The round copper plate covers a hole in the wall (which is actually a chimney). The two back rooms were most likely heated by coal stoves. 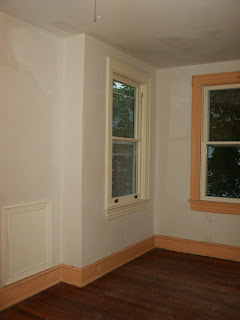 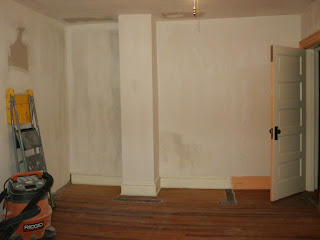 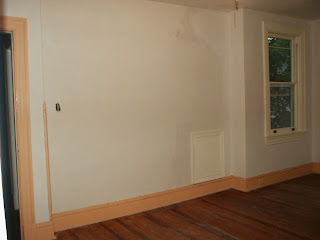 There's still a ton work left to do in this room. While the plaster cures over the next several weeks, Tom will scrape all the baseboards, replace the baseboard on the back wall, and refinish the floor. Then it's time to paint, install a new ceiling fan, and find someone to put in nice shelves in the chimney nook. We'll also need to purchase wardrobes. Ikea has some nice options. And then we can move everything back into that room. That will be good, because it's currently residing in my fiber room and it's almost impossible to move in there.

I think I might be your twin sister! I love buying the patterns, the yarns, casting on and starting. And then somewhere along the way I lose all momentum and cast it aside for the next new project. Maybe I'm fickle? Maybe I just like the rush of a new relationship? I really have to concentrate to get anything finished. *sigh*
Love your renovations! Would love to get some work done on our house, but I keep thinking it would just be easier to move! Ha!

I think you are a real knitter! you actually finish things! :) I know some people that start things every other day. those people are fake knitters. HAAHAHA. did you read the new yarn harlot book? According to her, you have a disease called Start-itis. :) it's ok...we all get it. :)

Ah, but you ARE a real knitter! I just took a peek over at your right sidebar, and there are all kinds of finished things. Plus, I don't think finishing objects is the determining factor (sheesh, I hope not, anyway!).

The renovations look great! Your house must be old if you are plastering and finding mystery chimneys and such, eh?

Maybe you could take a year off from big projects and just do lots of little things - I'll bet you'd feel very productive that way. I'm that way about sweaters because they take what seems like forever! (I am not a Wendy kinda knitter myself.)