Spinning! Believe it or not, after all my Saturday chores were complete, and Tom was comfortably installed in front of the TV to watch Babel, I repaired to my fiber room to start spinning up the Rambouillet from the Wooly Wonka Exotic Fibers Club. Fortunately, I had an empty bobbin although you'd think with all the spinning I haven't been doing, that empty bobbins would abound. I spin like knit. I have a lot of stuff going on and making progress on none of it.

I approached the wheel with excitement, mixed with trepidation. Would the seat adjustment work? Could I spin to "spec?" I've always just spun, never really paying attention to wraps per inch (wpi). In this case, in order to make the project, I needed to spin a yarn that would end up being about 13 wpi, two-ply. I figured out the singles needed to be spun at about 26 wpi in order to create a 13 wpi two-ply yarn. Most of you are saying "No duh!" All that I can say is that I've got a math block and I just tend to wing it. I'm getting much better though. By the time I'm 100, I should have this math thing licked!

Anyway, I commenced spinning and found that treadling was easy and smooth. I could treadle slowly and not have the wheel stop at the top of the revolution. The seat adjustment worked! I periodically checked the wpi and was getting close to what I needed. The Rambouillet is nice to work with. I found that I needed to split the roving in half and in half again in order to create and maintain a nice drafting triangle. I think the first bobbin is turning out rather well: 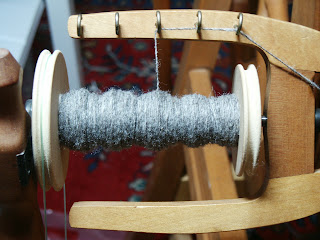 I can't wait to get back to the wheel to spin some more!

Knitting Progress
I made a little progress this week on the stockinette sock, although most of the progress was made during the Weekend of the Car Woes. In a previous post, I mentioned that I turned the heel with very little drama. However, the heel is looking decidedly cockeyed and my fear is that the sock will twist on my foot. But I'm ignoring that little fact and plowing ahead anyway. If I have to frog it after it's done, I will. If I don't, it's a bonus. Like Buddha, I'm trying to not be attached to the outcome: 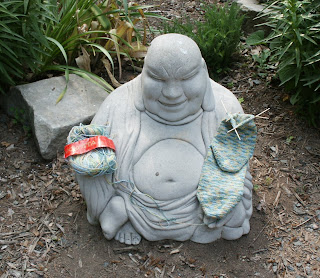 The sock just is. 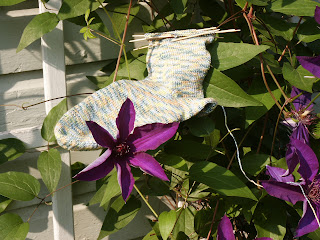 I wish I had the same attitude towards the Sweaters of Frustration, which I should rename to the Sweaters of Despair. I've lost my love for them. The going is slow. Making bobbles and cabling in the same row is agonizing. I've got about three inches to go on the back of the Jenna sweater and just can't bring myself to knit on it. As for the Christine sweater, I'm afraid that I've done the neck front decreases wrong. The pattern calls for decreasing every third row. So does that mean I decrease on rows 3, 6, 9, 12 or do I decrease on rows 3, 5, 7, 9? Should the decreases be done on right side rows or can they be done on right and wrong side rows? Just the thought of it makes me want to whimper and curl up into a tight little ball. Clearly, I've bitten off more that I can chew with these sweaters.

Discovery
For the last several months, I've driven past a new grocery, East West Grocery, advertising Asian and Middle Eastern items. I've never stopped to go in. So yesterday, after running some errands, Tom and I decided to stop by. I'm glad we did because it's an Indian grocery. Yippee! Now I don't have to go way out of my way to stock up on Indian spices, dals, rice, and other yummy things. The owner is very nice and we bought quite a few things. I'm inspired to cook an Indian meal and will probably do that tomorrow. Yum!

Emma
Emma is unlike any other cat I've had. She is a furry alarm clock, waking up promptly between 4:30 and 5:00 every morning. She jumps on the bed and strokes my face with her paw. She has very soft, velvety paws. It's endearing and would be even more so if she waited later in the morning. But she wants to be fed and she doesn't like to wait. I've been trying to not react to her and it seems to help. She still tries to get me out of bed, but is much less insistent.

We've started letting her go out on the deck, but haven't allowed her to go into the yard. We're still afraid that her mother's feral instincts will take over and she'll wander off. She loves being outside, catching flies and watching the birds and squirrels.

Emma also loves being inside, watching the birds and squirrels from her perch in the window. It's also her favorite place to sleep: 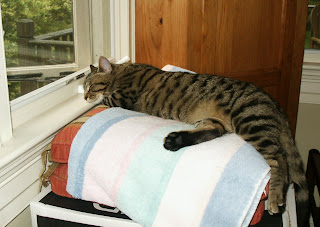 She can keep an eye on things and it's amazing how quickly she goes from sleeping to attack mode if a fly buzzes past her. She's somewhat of a watch cat as well. She growls when visitors come into the driveway!

Two more days off. Most of the chores are done...there will be grocery shopping and cooking and maybe a little bit of cleaning and laundry. And there will most certainly be spinning and perhaps a little knitting as well.

Nice job on the rambouillet! I must say that you put a great deal more thought into it than I did. Which is probably why you are getting such a nice, even single. And I am not... But it's fun and that's what counts, right?

Emma is a little cutie. Even looking at her fast asleep, I can see the wild kitty within!

oooh spinning!! :) very very nice! and keep going on that sock! you are almost done!

As for your sock heel, it looks like a short-row heel? Mine always look a bit twisty until I wash and wear them, then it all evens out.

And Emma is so, SO cute! I love a stripy kitty.

Speaking of cute, we have a new friend at home, too!

I think your "ADD" spinning and knitting probably matches the patterns of many people, myself included. I certainly dream up more possible projects than I ever start - but I usually enjoy it when I do!