Given that my car is going to be at the shop for a couple of weeks, I opted for the lowest car on the car rental menu, to minimize any out-of-pocket expenses. What I got was a Kia Rio whose driver-side door wouldn't lock or unlock with the key, that vibrated at highway speeds, and whose gas cap tether was broken. And it only had 27,000 miles on it. I arranged for an upgrade, partly because it's a major pain
to have to unlock the passenger side to unlock the driver side and partly because I was sort of embarassed to be driving a car of such ilk (my apologies to any readers who do drive a car of such ilk. I'm not really a snob). Plus my dislike of Kias stretches back 10 years when we made an epic trek over the Cascade mountains on our honeymoon in the dead of winter in a blizzard in a tiny Kia SUV. But that's a story for another day.

On Saturday, I went to the rental car place to pick up the new car. They suggested another Kia, which I turned down, and they offered instead a Ford Focus, which then they couldn't find. We finally settled on a Mazda 6, which seemed to be a solid car. It seems to drive well, but this car smells like someone spilled a bottle of cheap perfume in it. The smell was so strong that I left the car open all day to air out. And I had to wash my clothes because they had absorbed the smell (from about a three-minute drive home). The car also has another problem...one that is a potential safey hazard.

Let that sink in for a minute. This car is going to be driven by a woman who, when Sheepish Annie recounted her adventures with a spider, let out an involuntary shriek and jumped out of her chair.

After I got home, I noticed a spider nestled by one of the back windows of the car; I got an appropriately long stick, and with much shrieking, managed to flick it away from the car. Then I noticed something that looked suspiciously like a spider egg sack (empty, of course) on the passenger side view mirror. As I was wiping down the inside of the car in a futile attempt to rid it of the smell, I noticed a tiny spider on the dashboard. And I noticed a tiny spider crawling on me after I closed up the car for the night (it didn't register that it was a spider until after I brushed it off).

This is bad, very bad.

Why can't I get a nice, clean, non-smelly, non-spidery, working car?

I've woven in the ends and started the French knots. See? 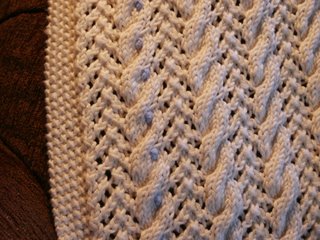 (The knots are more noticeable in real life.)

My idea is working, so the knots will go faster than I was fearing, but still not fast enough. It's hard to see, but I'm running the yarn for the French knots up the back of cables. 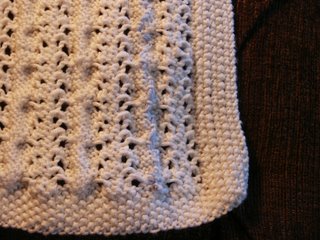 And finally, I need your expert opinions. This is the fledgling scarf for my One Skein secret pal. I think the yarn works nicely with the Milanese lace pattern, but I'm unsure about the left side. It angles out more than the right side. What do you think? Is it a keeper or should I go back to the drawing board? 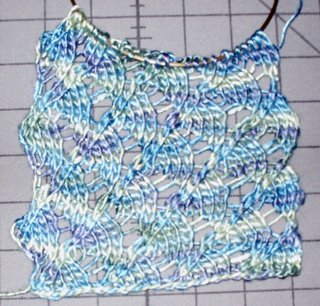 And finally, I'm closing in on the toe of the Jaywalker. And even better, the gauge gods didn't smack me down. The sock fits like a glove...er...sock. If I get some knitting in today, I might even be able to finish it. I think I'm going to love wearing this pair of socks!
Posted by Teri S. at 8:54 AM

Goodness! What kind of rental car place do you have? Reading about the spiders is giving me the heebie-jeebies.


I think the scarf looks beautiful. That yarn with the scallopy pattern is really gorgeous. The first repeat on the left is a little pointier than the other side, but is it something that might even out with blocking?

For goodness sake, take the car back. Just because it's a rental doesn't mean it should suck (or, in this case, stink)

The lace pattern complements the yarn beautifully. I think it's a keeper.

The lace is beautiful with the varigation of the yarn! Bummer about the car woes; hope yours is well soon!

Your spider woes caught me. I OWN a Protege 5 and had baby spiders last year. I ended up going "postal" on them, with a vacuum. They like hiding under the seats. 3 or 4 times of that and they were gone.

That scarf yarn looks lovely. What is it? It reminds me of Lion & Lamb.

Not sure about the scarf, but I do know what to do about the car. Set it on fire. Take the loss. No jury will convict you. I will back you up. Seeing a spider is one thing..."infested" is another. Pardon me while I go shiver uncontrollably.

Ha! I'm sorry to be laughing at your rental car misfortunes, but your retelling is funny. Hopefully, once you have a different rental and a few days behind you, you'll see the humor in it too.

Your scarf is lovely, and I think that with blocking the left side will be fine. And I'm loving that blanket - it's gorgeous.

The scarf is beautiful - I think when you block it - it will be fine. Call the rental company and get a non-stinkiny, non-spider infested, non- sucky car. Think about what would happen when a spider crawls across the dash when your doing 60 (been there done that - so not good!)

The blanket is lovley, What a great plan, carrying the yarn, (I'd have never thought of that - but then I'd have abandoned the knots) it will be so much easier that way!!

Eeeww...spiders in cars. I don't mind most spiders but the little white ones just freak me out. The Focus would have been a night mare to drive, however.

My dad drives a little Kia 4-banger. It should be the spokescar for the company. We have done things to that car that SUV's cringe at. Actualy, we once were geocaching, and had to stop and build a road to get out of where we were. There was a big Jeep that sat and watched us, then backed up and went back the way it came.

Oh my, spiders! Go back and get that first car. What about riding your bike? ;o) Sorry, I'm no help.
I love those colors in your secret pal project. That's gorgeous yarn.