The Blanket Has Left the Needles

It's true. I cast off Friday morning. And since then, I've knit only one round on the Jaywalker. No weaving in of ends, no starting of new projects, no (whimper) embroidering of 602 French knots on said blanket.

The reason? Work. Work from the office has intruded into my fibery world. "What!?" you exclaim "It's the weekend. It's potentially a long weekend!" Yes, my friends, I know. But there was a proposal with a deadline looming and work needed to be done. Fortunately, I wasn't the only one. And fortunately, I could work from the comfort of my own home (where my spinning wheel and stash were taunting me). A couple of hours on Saturday, ten hours today. But at least I'm done until tomorrow.

But fear not...there was some fiber in my weekend. Yesterday morning, Blogless Beth and I wandered over to Hunt Country Yarns for the first day of their month-long sale. Unfortunately, none of the yarn that I was looking for was on sale. But I completed my shopping for my secret pal. As soon as I finish this post, I'm going to start swatching for her final gift.

I also got my hair done. It needed to be trimmed in a big way and the grey was beginning to be a little too prominent. So off to the stylist's I went. My hair doesn't quite look like this but then, neither do I. But that was the general idea. And the grey is still a little too prominent. In fact, as soon as I got home, Tom remarked about the amount of grey in my hair. Sigh...some days you just can't win.

In response to the Sheep's question about the soggy kitty, said kitty is fine. She was a bit damp after coming in, but not drenched. She absolutely loves being outside in the evening. While she mostly sleeps on her cushion on the deck, she occasionally forays into the garden, in hopes of snagging some unwary birds. And apparently that night, she wasn't going to let a lot of rain stop her. 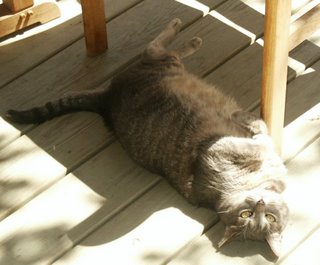 Yea finished blanket!! I still say it's beautiful without the PITA french knots! No one will ever know...

Tom is a brave man! Desdemona is available to leave him a little "present" like the one she left for me as a thank you for his kind observation. :) Yay on the blanket...that's been (and still is, I suppose) an undertaking of epic proportions!!!!!

Your kitty is adorable....Got here via Sheepish Annie's blog, glad I stopped by. Our dear Mitz (silver tabby) loves to strike the same pose for the camera too. She also frequently writes her own posts (or should I say, paws posts) for my blog.

Hope you will stop by for a visit, with kitty of course.