"Joyful" describes the weekend perfectly! There is something incredibly special about spending a weekend with amazingly talented, creative, and strong and caring women. It was a weekend of discovery and exploration and learning to let go of expectations and frustrations.

Marcia and I arrived at the camp in the early evening, a little later than planned because traffic around Harrisburg was terrible. Even so, we were the first ones there. We set up our sleeping quarters (I chose to stick to my tent because there were too many spiders in the cabin) and rearranged the lodge to be more conducive to the weekend's activities. As the other women began to arrive (about 30 in all), we helped them unload their gear. We had pizza and salad for dinner and a wonderful berry crisp for dessert, not to mention fascinating conversation as we became acquainted with one another.

Despite going to be late, I woke up early (you tend to be up with sun when sleeping in a tent) and got some quiet time knitting and reading. The Joy Weekend officially started with the opening circle. Each woman was invited to bring into the circle a woman who has been a guiding force in her life. It was very emotional and very powerful to hear everyone speak of their friends, mothers, teachers, and even pets.

Saturday was full of crafty activities, of which learning how to do mosaic was the high point. Marcia's sister Gretchen recently took a class in mosaic and that was her contribution to the weekend. Unfortunately, the mosaic area was very crowded all day, so I didn't get to make a mosaic. I did make a pinwheel and a beaded bracelet.

My idea of teaching knitting also didn't work the way I had hoped. I didn't have any structure or a project in mind and that might have been part of it. Several women said that I (or rather my sock) inspired them to take up knitting again, so perhaps I'll have better luck next year. I taught Marcia how to knit and did manage to make some progress on the second Trekking sock.

Saturday's dinner was amazing. Marcia made chicken and lamb (and unfortunately nearly torched herself in the process), Gretchen brought an amazing eggplant parmesan, and there was the usual assortment of salads and side dishes. These women can cook and even more importantly, they know how to eat! After dinner was cleared and the kitchen cleaned, a couple of women started drumming and several of us started dancing. What a great feeling to move with abandon! After dancing, we set up for the evening's entertainment, which was a series of skits that had been prepared during the day. Each "troupe" was given a bag of costumes and props and a list of words to be used during the skit. The kids did an amazing job. There was also singing. Julianne, who is quite young, sang a couple of blues songs that were incredible. Laurie, Marcia's older sister, sang a couple of songs and invited the rest of us to join in. And we did. It was so much fun! The evening had a feel of stepping back in time when entertainment was something you actively participated in. Today it happens to us, with television and movies and recorded music. We tend to be observers, not participants.

Sunday morning was the perfect time to try my hand at mosaic. It was quiet, no one else was around. I discovered that I tend to be more creative early in the morning or perhaps I'm more creative when I'm alone. Gretchen brought a variety of tiles and glass and stones. I learned how to cut the glass to get the shape I wanted for my design. It took all morning and a little bit of the afternoon to complete the piece. I'm very pleased with the way it came out and can't wait to see what it will look like after I've grouted it.

Here are my FOs from the weekend: 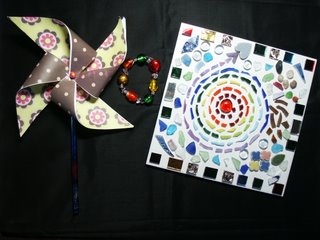 Here's the first Jaywalker, off the needles and on my foot: 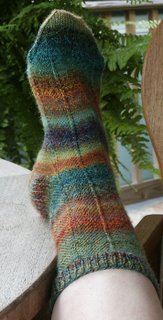 And there's not much else to see. Sock #2 is a little longer. I haven't made any progress on the scarf or blanket, and I haven't cast on for my nephew's rasta hat. And no spinning, either. Although I do have a lead on some local alpaca and I'll track that down later this week.

Oh what fun that retreat sounds like. All the activities, friendship, and nature. Wo0t!

Your comment about how we are observers, not participants, in our entertainment struck a cord within me. It's so true. I don't know how yet, but I think I need to do something about this.

Thanks for the uplifting post. Your Trekking Jaywalker is wonderful!

Sound like the kind of experience that renews a person. And to have multiple finished objects in one weekend is always satisfying! Good luck on the Great Alpaca Hunt!

That sounds like such a wonderful experience! (nice sock, too, by the way)