At long last, and with profound apologies to all of the intrepid extreme knitters who have sent entries in over the past several months, I present to you the latest in Extreme Knitting!

Stacey is our first entrant today (entry received in November). She is knitting at Acoma Pueblo in New Mexico. Acoma Pueblo is also known as Sky City and is a 70-acre pueblo village set atop at 357-foot sandstone mesa. Stacey appears to be knitting a scarf. 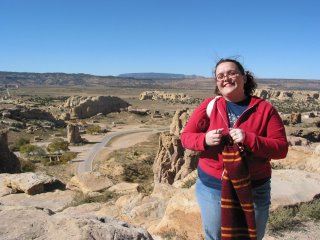 Our second entrant is Shirra, who sent entries way back in October, just as I was in the middle of preparing to return to work. She took the opportunity to knit while unicycling... 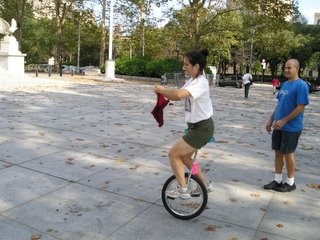 ...and while a climbing tree with her 9-year old, who is also knitting. 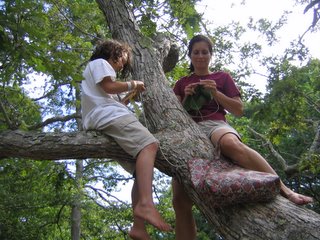 I'm duly impressed. I couldn't ride a unicycle even if I wasn't knitting!

I mentioned that Honorable Mentions would go to those who displayed prowess and creativity with Photoshop.

All hail this entry (received in January): 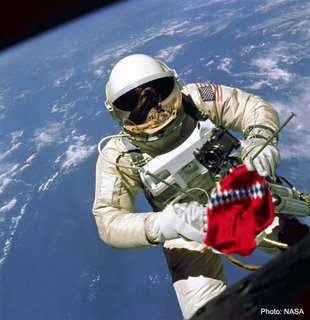 This is a photograph of Ed White, knitting during the first spacewalk way back in 1965. Ed said in his email that his wife had requested him to knit during the spacewalk so he did so, mentioning that it took about one minute to knit a single stitch. Because there was no live feed, NASA never found out.

I was suspicious when I received this entry because the sweater looked very familiar. One day a couple of weeks ago, my friend Keith called up and wanted to know if I could meet him for lunch and give my assessment as to whether a sweater from his early childhood was worth repairing. I agreed. The
sweater, knit from fine Virgin Orlon, was in fairly good shape, with the exception of a couple of holes that could easily be repaired with needle and thread. Then I received the above photo and a rather lengthy IM conversation with Keith ensued. Keith eventually 'fessed up, after spinning a yarn about how he and Ed were close childhood friends and had the same sweaters. Keith never ceases to amaze me with his creativity. And no, he does not knit. But his sister-in-law does.

This next entry (submitted in October) is from Elizabeth M., who had the temerity and grit during a root canal. 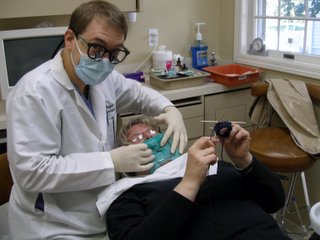 Elizabeth said that the dentist and his assistant probably thought that she was a little nuts, but it turned out that the visit was surprisingly painless and knitting-productive.

This next entry (submitted in the fall) is from Folkcat, of I Knit Around fame. This is the Yankee Siege Trebuchet: 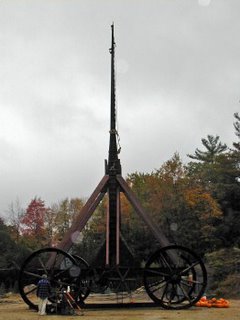 And this is Folkcat knitting in front of the Yankee Siege Trebuchet: 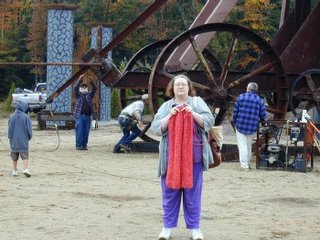 Looks pretty calm, right? But check out her entry Socks, Pumpkins, and Folkcat's Flying Leap to learn more about what a siege engine can do. It's a long post, but keep reading and you will be amply rewarded. 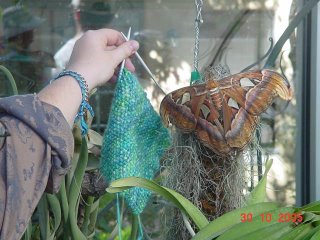 She said that while it was a bit overwhelming to take her wool knitting into a house full of butterflies and moths, no moths, butterflies, or knitting were harmed. However, when the moth moved, you can be sure that Cerridwen ran!

And the final entry is from Cathy S., who was knitting (a sock?) during a surgical procedure on her toe. 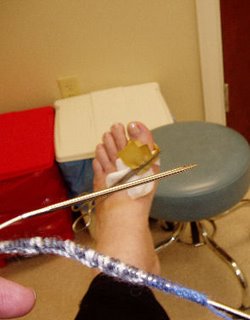 Those are wonderful .... extreme knitting rocks!!

Did you not get my entry, or is war-knitting non PC?

ANyway, those are great!

You know.. I was searching for pictures of astronauts to add knitting to and I found that photo and thought how perfect it would be to add in some knitting.. hmmm.. but I don't have photoshop and I don't quite have the skill to do it otherwise.. heheh
Tell your friend thanks!! It;s cool to see!

Great pictures! Even the Photoshopped one. *grin* I was duly impressed by the unicycle knitting, but during a ROOT CANAL??? That's extreme. Wow. :)