As If I Didn't Have Enough To Do

Well, the Christmas knitting is complete, almost. I have one more hat to knit, but it's cotton and there isn't a deadline. Here are the finished objects. 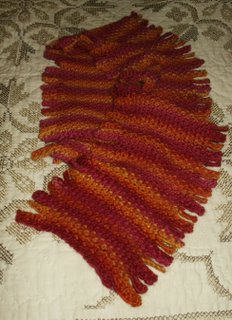 This is the Fickle Fingers Scarf from the Winter 2005 issue of Interweave Knits, knit with Serendipity (an alpaca/wool blend) from Dancing Fibers Yarn. The yarn was an absolute dream to knit with. Unfortunately, the recipient (a 14-year old girl) seemed singularly underwhelmed with it. Oh, well... 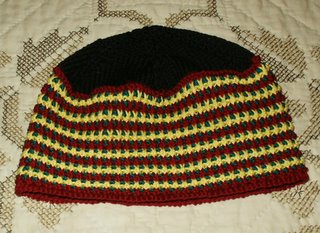 The Rasta Colors hat proved to be quite popular with all ages and I'll be making more of these. This is actually the Heads Up Hat from the Spring 2005 Interweave Knits, but knit with Provence cotton. 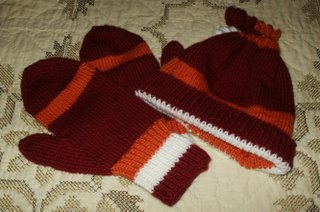 The School Colors hat, scarf, and mittens ensemble is finally complete. I completed the scarf late winter last year (it was supposed to be a Christmas gift) and finished the hat and mittens before Christmas this year. Unfortunately, it's been too warm for my nephew to wear them, even though he's going to school in the mountains of southwestern Virginia. 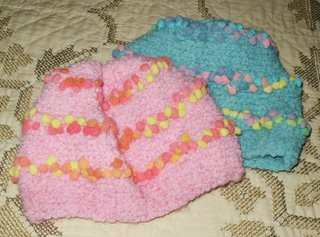 The Bubble Up Hats, knit from kits from KnitKits, are for my youngest nieces. Fun hats, but the bubble yarn was a pain to knit with. Jenna said "I love my hat!" as soon as she saw it. Christine, on the other hand, was very blunt and said "I don't like the hat." Her mother was appalled and took her in the back room for a talking-to. 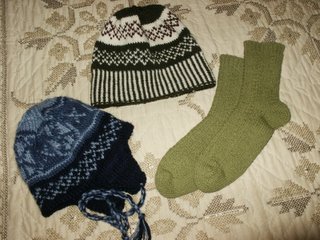 The last three gifts have not yet been received by the giftees, mainly because I finished them this week. They will go in the mail tomorrow. The earflap hat is also from the Winter 2005 issue of Interweave Knits and is actually the Berry Hat, knit in blue Manos. The other hat is of my own design, borrowing the Fair Isle pattern from the Berry hat. It is knit in Cascade 220. And the socks are the Toe Up Socks from Y2Knit, knit Cascade Fixation. I love knitting with this yarn and the pattern is a nice, easy slip-stitch. If you haven't tried short rows for the heel and toe, this would be a good pattern to start with, as it is easy to see and pick up the wraps.

I have another scarf and a poncho to show, but for some reason, Blogger doesn't seem to want to upload them. I'll try putting them in another post.

Next up to complete is a baby blanket for a special sister-in-law. The baby is due in early March, so if I continue the 5:30 a.m. knitting sessions, I should be able to complete it before, or just after, the baby is born.

With all the gifts I've knitted for others, I'm feeling a bit neglected and really want to knit something for me. I'm thinking that I'll knit the Blue Danube socks from Ellen's Half Pint Farm that I picked up at Stitches in September. The yarn is a silk/merino blend that feels absolutely yummy.

And if that isn't enough, I've declared for Team Fair Isle for the Knitting Olympics that the Yarn Harlot is hosting. I'll be knitting the Baltic Mittens from Folk Mittens. It will be a major challenge to knit these mittens in 16 days, given that they are knit on tiny needles and have four colors. In addition, there is a left and right mitten, which increases the risk of the project not being completed. There's a very good chance that I'll knit either two left or two right mittens.

Clearly, I have not recovered from the Christmas knitting delusion euphoria.
Posted by Teri S. at 2:57 PM

If I thought I could get that kind of results by taking time off from my blog...