The Lives of the Cowboys

As I was driving back from Y2Knit this evening, I happened to catch A Prairie Home Companion and the episode of The Lives of the Cowboys on the local public radio station. And guess what? Those cowboys were knittin'. You could even hear the clack of the needles in the background. From the sound of it, they weren't very good knitters because the sound wasn't very rythmic. But the dialogue was spot on for a group of people knitting. I thought about reaching for my knitting needles and settling in for a knit and chat session, but then I remembered that I was driving. Bad idea. If you can, try to catch the repeat on your public radio station on Sunday. If not, you can listen to tonight's show after Monday here.

So, I spent the last five days in a yarn shop! It was a great experience! I got to help people choose yarn, I had some time to knit, and I got to open shipments that came in. Thursday was help day. At least four people came in wanting help with their projects. Unfortunately, I couldn't help all of them and had to ask them to come back when Susan was there. One was a lace project and I'm terrible at reading lace and fixing problems (hence the lifeline every other row in Fern Leaf) and the other was a sleeve that had been set aside for too long. I was embarrassed that I couldn't help the woman figure out where she was in the pattern and in the increases. The lesson that I learned was that I need to become more proficient with knitting before opening my own shop.

I did enjoy the work and it was fun to meet all the different people. It wasn't difficult to remain patient with those folks who just weren't getting what I was saying; the problem was most likely in how I was communicating. However, I was totally exhausted by the time the shop closed on Thursday. That surprised me, because I didn't feel that the work was that hard.

In other job news, it appears that I'm again a top candidate for a position in Fairfax. I need to meet the client on Tuesday and if they like me, I might get an offer letter. Apparently, meeting the client is a formality. The other position that was looking good fell through; that company imposed a hiring freeze the day I was supposed to interview, so the interview was canceled. And the Red Cross called this week, too. They wanted me to deploy today, which I couldn't because I was working at the shop. 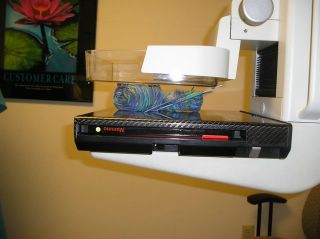 Has anyone else taken their sock to get a mammogram?
Posted by Teri S. at 8:00 PM