Well, no word on the job in Rockville. The hiring manager was able to go on vacation this week after all (his dog recovered from an allergic reaction to some vaccinations) so the company has postponed making a decision until next Monday. I'm trying very hard to maintain my cool and not read all sorts of bad things into it. Mostly I'm succeeding. But there's a little part of me that's saying that I'm not going to get the job and he didn't want to go on vacation having just delivered bad news. Of course, it can work the other way, too. He didn't want to enter into salary negotiations just before going on vacation. See, I'm trying to remain balanced!

I had a fun day yesterday with my friend Pam, who is also jobless at this time. We had lunch at this yummy Vietnamese restaurant, A Taste of Vietnam, in Sterling. Pam had never eaten there and really enjoyed it. After lunch, we went back to her house and had tiramisu for dessert. I had made the tiramisu last Friday. Tom didn't like it (it was a bit soggy) and it would be a very bad thing for me to eat it all myself. So I shared with Pam. Fortunately, it has gotten less soggy over time and is actually quite edible now. Then I whipped out a ball of yarn and some knitting needles and proceeded to teach Pam how to knit.

It was an interesting teaching experience, not because Pam wasn't an apt student (she was), but because it forced me to deconstruct how I knit. Teaching the long-tail cast on was the hardest. I could cast on correctly. I could guide Pam's hands through the correct sequence, but it just wasn't working for us. We kept getting an extra loop of yarn on the needle. I finally figured out that thumb placement is key. Dropping the thumb that holds the yarn causes a twist; holding the thumb closer to the index finger doesn't cause a twist. We then moved on to the knit stitch. This was much easier and within a few minutes, Pam was happily knitting away. Her tension looked great, even though she was knitting with LP Cotton Fleece on slippery aluminum needles. Every now and then, she'd make a mistake and I would demonstrate how to fix it, then recreate the mistake and let her fix it. She was thrilled that she was creating fabric with string and two pointy sticks! We'll get back together in a couple of weeks for a purl stitch lesson. And yes, I'm teaching the continental method.

I didn't get home until almost 6:00, which meant that I missed going to the Loudoun Knitters meeting. I've never been and really feel a need to connect with local knitters. Fortunately they meet twice a month, so I'll go next time.

More Extreme Knitting Entries
It's interesting how there seems to be a theme for some of the entries that I get. For example, knitting while climbing rocks or knitting while doing work-related activities or knitting while on or in the water. Today's entries involve bridges (and suspension...more on that later).

Celia decided to take her knitting on a little sightseeing trip. While showing off the sights of San Francisco to a visiting East Coaster, Celia and crew decided to walk across the Golden Gate Bridge, creating the perfect photo opportunity for some extreme knitting: 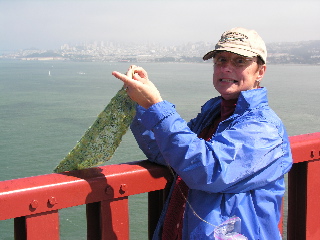 Celia is definitely knitting on the edge there. And here is a photo the captures the majesty of the bridge: 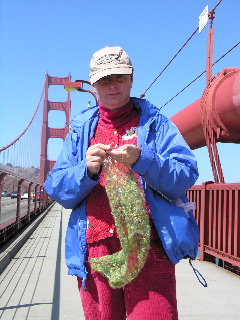 Folkcat also chose a bridge for her extreme knitting. In this case, it is an old bridge (Savage Bridge) near Milford, New Hampshire, that spans the Souhegan River. 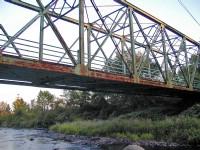 Folkcat not only took her knitting to the edge, she took herself too, by precariously perching on the railing: 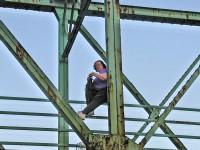 Remember, no knitter or knitting is to be harmed during the challenge. And that brings us to the final entry today and a review of the rules.

In the interest of being open to diversity, but also in the interest of not alienating this blog's audience, I'll mention the activity, but not post the photos. Alice, in the UK, submitted an entry that documented the combination of her love of knitting with her love of...um...body modification. (The squeamish and faint-of-heart will want to stop reading now.) Alice was photographed knitting a lovely garter stitch scarf while suspended from two hooks in her back. While it looked extremely painful, she appeared to be quite content and peaceful. (I may have to go have a lie-down now. Whew!)

I have to admit that this is by far the most extreme entry thus far. Unfortunately, it is also the most questionable. I debated long and hard about whether or not I should even mention this entry and in the end, decided to include it as an example of what isn't appropriate, extreme though it may be. As a reminder, the rules are:

All contenders should submit a picture of themselves (or their knitting) knitting where no (wo)man has knit before. Knitting while skydiving, scuba diving, bicycling, rock climbing, on rooftops, up a tree, etc. are all examples. It isn't necessary for the knitting activity to take place in the great outdoors, either. The key is to be imaginative (while keeping it clean!) and not harming the knitter or the knitting in the process (safety first!). While Alice clearly consented to the modification, I would classify that activity as a knitter being harmed. In the future, entries such as Alice's will be returned to the contestant and will not be posted or mentioned.

I also received a question if it's possible be a serial extreme knitter and enter more than once. The answer to that is absolutely! The only caveat is that you must follow the rules. So enter early and enter often!

On A Lighter Note
It's a gorgeous day today, slightly breezy and in the low 80s, just perfect for knitting outside. So Jez and I are going to do just that. With any luck, I'll get one or two more rows completed on the Fern Lace Shawl before it's time to start dinner, which tonight will have an Indian theme. Details on the next posting!
Posted by Teri S. at 2:00 PM

Just a note about my perch on that bridge - I'm actually sitting on a wide patch of iron that connects the railing to the upright next to my back.

While I wouldn't recommend everyone run out and climb over the railings at their neighborhood bridges, this one was actually pretty safe - with proper care. I held onto all supports within reach while I climbed up, and I made sure I had a stable perch before having Gryphon hand me my knitting. And there was a good ten to twelve inches of bridge between me and the edge.

Not for everyone, no - but I carefully assessed the location before going ahead, and I used caution every step of the way.

Thanks for including me in the Extreme Knitting Gallery - this was fun!

even so, I still think sitting on a bridge knitting is a LOT more risky than what I did, my feet were only about 90cm from the ground during the suspension, there was no risk of, for example, me losing my balance and falling to my death.
As far as suspending causes me 'harm', well, it's 5 days on and the only damage I have is 4 small dot shaped scabs on my upper back. Suspension is perfectly safe as long as the people piercing and in charge of the ropes know what they are doing, and in my case as well as being very experienced in suspension, they are also good friends of mine.
If your reason for deciding my submission was inappropriate was due to you personally finding it distasteful, then that's fine. I would rather you had told me that rather than dressing up your objection in some insincere concern for my personal safety.

Yay for teaching someone how to knit! I taught two people this Spring. One stuck with it and one didn't, but that's still batting .500, right? :) Oh, and my sister has picked up her knitting again (under my influence) and even got her friends knitting lessons as gifts! Hooray for roping in others, uh, I mean spreading the joy that is knitting!