Winter has always been a time of drawing in for me, but never has the drawing in been so intense. Like "I never want to get out of bed" intense. On the plus side, I feel very indulgent by staying in bed until (get this) 7:30(!) but on the negative side, it's hard to get motivated to do anything. I mostly want to be a bump. And knit. And read. Oh, and eat.

My running goal for this year was to run a 50K at the end of March, but with the miles I haven't been logging, I suspect I'm going to fall short of my goal. If I'm lucky, I can get my butt out of bed for a 6-mile run. But mostly I haven't been running. The problem is that I'm still eating like I'm running, which pretty much equals disaster on the weight gain front. Will I ever return to trail running and ultra marathons, which I professed to love? Only time (and Spring) will tell.

Despite the inertia, I managed to be fairly productive today. The herds of dust buffalo were wrangled and culled (both upstairs and downstairs, which is amazing in itself because I can usually manage to get one level cleaned in a weekend), and I did a little bit of stash organization. As I've acquired yarn, I've squirreled it away in various bags shoved into a closet. Today was the day to go through the bags and the Basket of Shame (BoS). The BoS contains UFOs. While I have UFOs aplenty, I didn't find as many as I thought. However, I did discover more sock yarn. Like kind of a lot of sock yarn. Some is destined for socks for Tom and the rest? Well, the rest is all for me! Or maybe my relatives and friends. In addition to the sock yarn, I found a lot of sock needles. And point protectors, stitch markers, row counters... Yikes! How many Brittany size 1 needles does a girl need? Apparently, a lot. Oddly, I found two socks-in-progress, of the same yarn, in different patterns. I think one sock lost its charm and I used the remaining wool for a different sock, which also lost its charm. Fortunately, the yarn has not lost its charm, so I'll eventually frog both socks and start afresh.

Sadly, I did not find the single finished Norwegian mitten from the 2006 Knitting Olympics, only its unfinished mate. I suspect the finished mitten is tucked into a bag in a basket somewhere. I'll find it one of these days.

I'm making progress on the second Cloning Anemone Rib sock. The gusset is in progress and the stitch count is correct. Expect the finished pair by next weekend!

And speaking of which, we're celebrating our 15th wedding anniversary soon and I'm taking several days off work. Woo hoo! I'm sure that I'll find time to knit. The question is, what shall I knit next? There are any number of UFOs that I could finish. Or I could knit another pair of socks for Tom. Maybe I'll do both...pull out a UFO to finish and start a pair of socks.

I joined the Rockin' Sock Club this year after a two-year hiatus (like I need more sock yarn) and the January kit arrived yesterday. As always, the colors are gorgeous. This kit contains two skeins of yarn (why do I keep spelling "yarn" as "yearn"?) and two patterns. One pattern is color work; the other has a sort of honeycomb stitch pattern. I like them both and have no idea which one to make.

I was planning to be a little more philosophical in this post, but well...I was overcome by inertia.

Maybe your week be filled with forward momentum!

Tom has started training for MMT, even though he's way down on the wait list (his lottery number was not a winner). So this weekend he's off running the hills and rocks of the Massanutten Mountains, leaving me at home with the cats. Ordinarily, I would have gone with him and helped at the aid stations but both of our cat sitters are out of town this weekend. So, I'm a single woman this weekend.

Whenever Tom is gone, I've got all sorts of ideas about what I want to accomplish, and the weekend stretches before me, seemingly endless. By the time he returns home, I haven't accomplished half of what I wanted to. Today, however, was rather productive.

I ran this morning, only six miles, and as has been the case lately, I struggled to keep my heart rate down. I ended up running by myself, which I don't enjoy, but instead of grumping about it and berating myself for being an old, fat, slow runner, I looked around and noticed things--the dun color of the fields, the way the wind sculpted the snow on the side of the road and how it glittered in the sunlight, the blue of the mountains in the distance. While I didn't get to my happy running place (my heart rate was still too high and I was still struggling), noticing did get me out of that negative frame of mind.

Later in the day, a friend came over for some joint career counseling. We've been in our careers for decades and for the last year or so have been toying with the idea of doing something different. The problem is we don't know what we want to do. Today we tried to figure it out. After wracking our brains for several hours (and not finding any answers), we went to Market Table Bistro. The food was good, reasonably priced, and at the early hour of 5:30, the service was fast (perhaps a little too fast).

So what's in store for the rest of the weekend (which sadly is not a long weekend)? A wee bit of housecleaning, perhaps. Some grocery shopping and cooking, maybe start planning a sweater, maybe figure out what to do with design for Shauna's mittens (the stitch count isn't working out for the patterns I want to use)...the possibilities are endless.

Knitting Progress
I've made some headway on the second Cloning Anemone Rib sock. But I noticed a mistake near the top that's bugging me more than it should, given that no one is going to see it. I might end up ripping it out once again.

In better news, I'm going to be attending the Squam Art Workshops in June. I've signed up for two all-day classes with Cat Bordhi--Personal Footprints and Moebius Knitting. I have a suspicion that my head will explode by the end of the second day. On the third day, I'll take a drop spindling class with Denny McMillan. I know how to use a drop spindle (or at least I used to know how), but recently all my attempts at spindling fail. I don't know if it's me or the spindle, but I can't get the spindle to spin for any length of time. Could it be the roving I'm using? At any rate, it's very frustrating. Anyway, I'll be taking a road trip to New Hampshire in June and it will be a lot of fun. Two days up (I really don't want to drive for 11 hours) and two days back. Squam will provide a much-needed vacation, even more so since work from now until then will be intense, to say the least.

Well, it's getting late and I still have things I want to do...read, knit, dream a sweater...

We're a week into 2011. Let's see where I am with my resolutions, intentions, what-have-you, shall we?
Knitting Progress
I started the mittens for my niece and have run into a bit of design conundrum. I'd like to use three colors but my idea for the hand and palm design will mean that I've got floats that are more than five stitches. So I need to think on it more. I'm quite pleased with the cuff, though (please ignore the rather glaring mistake; this attempt is a prototype): 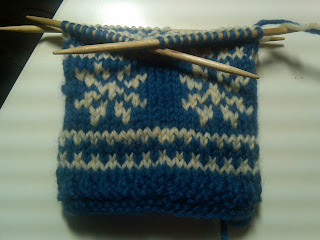 I cast on the second Cloning Anemone Rib sock for a third time. Hopefully, this time will be the charm. I haven't gotten very far and hope to make more progress tonight and tomorrow. Plus, I'm planning to attend the Loudoun Knitters meeting on Tuesday and should be able to make good progress there.

I also did something a bit silly and joined the Rockin' Sock Club 2011. This will be my third Rockin' Sock Club (previous years were 2007 and 2008). So far, I've completed one pair of socks out of the 12 I've received. The second pair is in progress. Perhaps this year, I'll find time to knit at least one pair of the sock clubs offering. If not, I'm building a great sock yarn and pattern stash!

Running Progress
I actually managed to eke out just over six snowy miles this morning, but it wasn't easy. The route seemed to be uphill both ways. The snow definitely enhanced the beauty of the route. I'm planning to run about 11 miles tomorrow, up Thomas Mill Road (a beast of a hill) and down Canby (beautiful!). However, if the winds materialize, I might skip the run and go straight for coffee (and knitting). My running goal was to run a hilly trail 50K in March, but I'm not feeling very optimistic about that right now. Maybe I'll do a hilly trail 50K in October instead.

2010 (may it rest in peace) was a challenging year for me in many ways. Lots of snow (that's good), trying to train for the Boston Marathon while recovering from plantar fasciitis (and record snow levels), a bout of Lyme disease (or so they said; I'm still skeptical), and of course, the daily challenges of home and work.

By the end of the year, I was darn weary of it all and optimistic about the dawning of the New Year. While I don't go crazy with New Year Eve celebrations, I do see the New Year as a metaphorical "reset" button. It's a good time to put the brakes on the weird, negative thinking that I can do so well and start with a fresh, positive outlook. I was really looking forward to that fresh start.

Which is why I was a bit surprised this morning when the day dawned gray and misty and all I wanted to do (after feeding the cats at 5:00 a.m.) was crawl back into bed and pull the covers over my head and not come out, not even for a trail run. This is not an auspicious way to start the New Year. Clearly, I'm still in great need of an attitude adjustment. And to help with that, let's review my resolutions (or intentions) for 2011:

A Knitting Retrospective
This year wasn't the most productive knitting year I've had, but I did manage to finish some projects:

These are the projects that I want to do this year:

So there you have it. Looking back and looking forward.