Yesterday was the 2nd Annual Mule Run, in which a few intrepid runners from our running club run through the night in an attempt to cover 100 kilometers (62.4 miles). This year the run started on the C&O Canal towpath at 7:00 pm in Shepherdstown, West Virginia, and continued through the wee hours of morning, ending in Carderock, Maryland sometime mid-morning today. There were 12 runners, plus various people who were willing to give up their sleep to make sure the runners were appropriately watered, fed, and otherwise taken care of. Of the 12 who started, only three finished. To be fair, not all those who started intended to complete the entire distance.

Tom started with the intent go as far as he could. He started out running strong, and continued to run strong all night long. When he came into the aid station at the Edward's Ferry Boat Ramp (at mile 50), he was convinced that our illustrious club president was gaining on him ("I turned around and saw him. He has a blue shirt on."), despite the fact that we told him that Mike was about an hour behind him. Tom was in and out of that aid station quicker than you can say "Jack's a doughnut" and finished the run (which at that point became a race for him) in 13:55.

I ran as well, although I knew that I wasn't up for the full distance. My longest runs have been 22 and 23 miles and I felt that I needed more runs at that distance before attempting something as intense as a 100K. I decided to run to the third aid station, which was 24.6 miles (my training goal is to be able to run 20 miles without feeling totally wiped out). My running partner for the evening wasn't feeling well (and neither was I; the salmon we had for dinner was sitting like a lump in my stomach) so our pace was rather slow. The second leg of the run was about 10 miles and we walked most of it. Kim dropped out after that, so another club member and I continued to Point of Rocks, where I was planning to stop. That would have given me 24.6 miles, the longest distance to date and almost a marathon distance.

I didn't stop, though. I was still feeling pretty good, although a bit tired, and was pretty easily talked into going the next aid stop, about 8 miles away. The problem was that I was now running with two of the fastest women in club. As we headed out, I told them we need to go slow. They agreed, and off we went.

The running could best be described as annoying. The area had been hit with a bad thunderstorm earlier in the evening and the trail was littered with branches (which looked like snakes) and puddles abounded. We would run for 20 yards or so, then have to dodge a puddle. Sometimes the puddle didn't look like a puddle and then we'd run through it, getting our feet wet and shoes muddy (wet feet on a long run are not good). There were a lot of bats out and they were swooping around our heads, catching dinner. The spiders were busy spinning fine cobwebs, which we would run through (fortunately, no spiders were attached). I hate feeling cobwebs on me! When we got a little closer to the aid station, we ran into two of the crew members who came out to run with us the last couple of miles, which seemed to take forever. After we got to the aid station, the crew members said that we kept up a blistering pace, but felt that they couldn't really ask us to slow down. The pace wasn't all that fast, just under a 12 minute mile. However, when you are running in the dark and are tired, it feels much faster!

So, I set out to run 24.6 miles and finished running 33 miles in 7:19, exceeding my goal. My legs aren't that sore (it was a flat course), which means that I've met my goal of being able to go out and run a very long distance and not feel like my legs are trashed. I'm extremely tired, but then that's what happens when the cats get you up at 5:30 in morning and you don't go to bed until 12:30 in the afternoon the next day.

Knitting Progress
In other finishing news, I have one and a half FOs!

The Tibetan socks, they are done. And, believe it or not, one of the Monkey socks is also done! I was going to post pictures, but I'm too tired to find the camera, set up the shots, take the pictures, download to the laptop, then upload to Blogger (there's got to be an easier way).

There will be plenty of time for knitting next week, since we'll be at the beach with Tom's family. I'm going to rip back the Too Many Choices top and start it over, try to figure out what I did wrong on the easy shawl I'm working on, hopefully finish the second Monkey sock, and possibly start the most recent sock from the Rockin' Sock Club.

That's all for now. It's starting to get dark, which means it's time for bed (even though it's not even 9:00 yet). 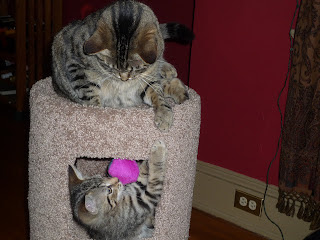 I'm rather pleased with the way the two felines are getting along. After hearing horror stories about the incoming cat having to be sequestered for weeks and weeks, I was prepared for the worst. We kept him totally sequestered for several days, then put a piece of lattice in the door to his room, so he could see out and Emma could see in. We also let him out of his room for brief periods. Emma was very curious, but wary, about this new critter in the house. Initially she'd growl and hiss at him, but over the last week, the growling and hissing has diminished somewhat.

He (I should probably call him by his name, right?) is a playful little boy. He can play for hours without stopping and then all of sudden he goes to sleep. He likes all of his toys but I think his most favorite toy is Emma. He pounces on her and tries to catch her tail and chases her. She'll play with him, but when she's had enough, she lets him know. She'll growl and smack him on top the head--bapbapbap! He has learned enough to sort of back down when she raises her paw. However, Emma is not the dominant cat. She has lost all of her favorite sleeping places to the little boy. That's very sad.

Despite the occasional spats, they get along well. I'm very pleased with the he has integrated into the household. He's a sweet little boy and is mostly well-behaved. How can you not love a face like this? 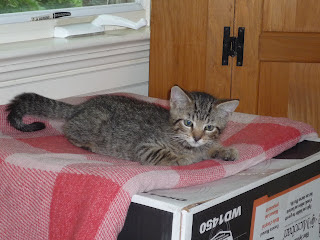 And here he is, trying to play with his tail: 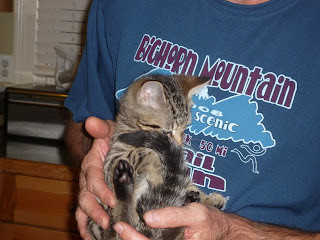 Knitting Progress
Sad to say, there's not much knitting going on. Between work (which has become quite busy), running, and the kitten, I haven't had much time to knit, save for a round or two while I was waiting for carry-out at our local Thai-restaurant-in-a-gas-station (which has excellent food, by the way). One Monkey sock is almost done. I'm still working on the toe but it's very close. All of my other projects? Nothing. And for pictures? Nada again. One of these days I'll get around to taking pictures.

That's it for now. Happy knitting!