I'm pretty good about knowing where I am in space. Sure, I rarely occasionally frequently bump into the corners of tables and desks and such, leaving bruises on my hips. But when it comes to staying on my feet, I'm rather talented. Or so I thought, until last night.

We met some friends at our favorite watering hole and due to the popularity of the place, I had to park farther away than usual. It was also raining, so I was a bit miffed as well (I got over it). While we were there, additional friends and acquaintances unexpectedly showed up; it was almost like old times. (Over the past several years, the patrons have shifted from local townsfolk to what we assume to be people from the massive subdivisions that are encroaching on our little town.) I started the evening with a pomegranate Cosmo and then had a glass of wine with a pot full of mussels (in a Thai curry coconut and ginger broth; very yummy). After dinner, we took our leave and headed home.

And that's when it happened.

I'm a fast walker. Unless I'm hiking, I like to get from point A to point B quickly. (This propensity for fast walking drives Tom crazy. He strolls. Unless we're hiking; then he puts his head down and wants to get from point A to point B quickly.) I was walking to my car at my usual fast pace when all of a sudden, one shoe flies off my foot, the other foot seems to stick to the ground, and the remainder of my body has a close encounter with the asphalt, which is wet from the recent rain. Fortunately, I fell in the gutter (no jokes!) because a car was coming up behind me just as I took the dive. I don't seem to be damaged beyond a few scrapes and the injury to my pride.

Feeling the Love
I started a new pair of socks for Tom using the Fortissima Socka pictured on the previous post. Several times, actually. I needed something easy to knit while I was waiting for the dreaded procedures to begin. (They went well, by the way.) I'm using the generic toe-up sock from Wendy Knits, modified to account for Tom's larger foot. I love this sock dearly. When I'm not knitting it, I want to be. When I am knitting it, I don't want to stop (so ripping it back a couple of times because I knit the short rows inside out wasn't a problem). I'm entranced with the way the yarn is self-patterning. And I love the slightly worn look of the yarn. I don't like its splittiness, but I can live with it, because everything else about it is so perfect. It even smells vaguely sheep-like.

Here is the object of my affection: 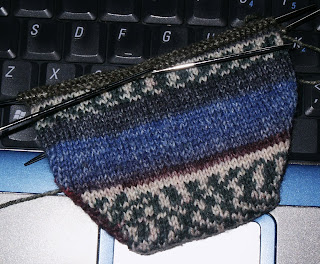 The other side has maroon and red stripes. Unfortunately, the camera batteries decided to give up the ghost as I was photographing the sock. You'll just have to imagine it.

The Gentleman's Fancy Socks. They are finished! 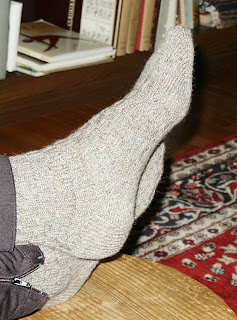 Reclining on the bed: 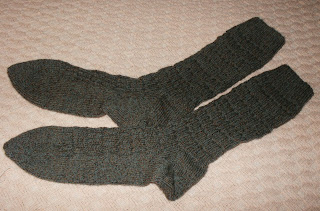 After all was said and done, despite the numerous do-overs on sock the second, these socks were a pleasure to knit. They fit Tom relatively well, although they are a little snug. Personally, I like a snug sock. Tom declared them very comfy and I practically had to wrestle them away from him so they could relax in a nice warm Eucalan bath. I think Tom's next pair of socks will be from this yarn: 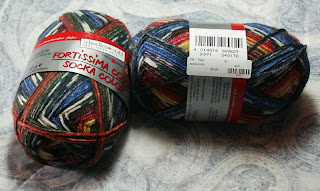 I didn't have too much energy last night for knitting anything complicated, so I started prototyping the Thumbless Jogger's Mittens from Elizabeth Zimmerman's Knitting Around, using some Manos I had left over from a hat. While these mittens continue to charm me (how can you not love a mitten where the top curls around your fingertips?), I am not charmed by the way they are turning out. I think they are sized for a large adult hand (which I definitely don't have) and even though I'm getting something approximating gauge, I don't like the way the single-ply is knitting up. These will be headed straight for the frog pond and I'll try with another type of yarn. Hmmm...maybe a two-ply like the pattern calls for?

Okay, it's time to stop now. I'm beginning to focus on the hungry tummy rumblings (no solid food since Saturday night) and am sure that anything else I write won't be very cohesive.

I lied last weekend when I said I would finish the second Gentleman's Fancy Sock by the end of the weekend. I almost finished the toe, then realized the stitch counts on the needles were off. I unknit and was appalled at number of mistakes I found. There were decreases in the wrong place, decreases partially worked, and several stitches that were just slipped from one needle to the other. However, I was running a fever over the weekend and am sure that it was the fever that caused the plethora of mistakes.

However, it wasn't the fever that caused what happened next. That was sheer stupidity poor judgment on my part.

See, I ran out of yarn. And not by a little bit. By a lot of bit. How the heck could I get a full sock out of the first ball of yarn (with 19 inches left over) and miss the mark so badly with the second ball on the second sock? Because I added an extra 10 rows, that's why. It looked like the foot was too short, so I added an eighth pattern repeat. I spent a good part of the morning frogging the toe; now all I have left to do is rearrange the stitches on the needles and start the toe over again, like for the third time. I swear, this sock is turning into the Never Ending Sock. I'm so close to finishing I can almost taste it.

And today, it will be finished. I'll have plenty of time this afternoon and evening to knit to my heart's content. I'll be prepping for tomorrow's "procedure" and leaving the house is not advisable. I'm on a clear liquid diet for today as well, so there will be no pesky cooking to take up my time. The only wrinkle in my plans is that I have to drink eight ounces of a polyethylene glycol solution every 15 minutes for about three hours. Shudder... That alone could put a stop to my knitting plans.

Yoga Socks
Thanks for all the nice comments on the yoga socks. I gave them to my teacher before class on Saturday and she loved them. She immediately put them on and tested them with some downward dogs, upward dogs, and lunges. She pronounced them eminently usable for yoga. And the best part is they kept her feet warm during class. I suspect there will be at least one more pair of yoga socks in my future.

That's it for now. Remind me not to knit tomorrow. I suspect knitting while recovering from anesthesia is going to be more deleterious than knitting with a fever.
Posted by Teri S. at 1:39 PM 3 comments: