Look at what arrived in the mail on Monday! 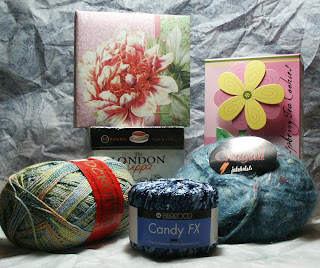 All sorts of goodies from my secret pal! There's a skein of Sockotta sock yarn, in very spring-ish colors (color 6 for those who have enquiring minds). Since this yarn is a cotton/wool blend, it will be perfect for the warmer months (if they ever arrive...more about that later). There's a ball of Chagall by Jackobsdals, a Swedish yarn. Even though it's named after (I presume) Marc Chagall, the colors remind me of Monet's Waterlilies. It's a mohair/wool/synthetic blend and is quite soft. There's also a ball of Candy FX in the most wonderful shade of blue. I think I've got the perfect color of Softwist to pair it with. To round out the gifts, my secret pal included a book of notepaper, always useful, a box of tea from England, and some Raspberry Tea Cookies. Yum! I'm going to have to find some time this weekend to sit down with a cuppa and cookies!

My secret pal also included a card which had a cute verse on it (I forgot to include in the photo). It said:

Mary had a little lamb...
It's fleece was white as snow.
And everywhere the lambie went,
that girl was sure to go.

She followed it for days and days,
'cuz Mary was no quitter.
"Give me your fleece you crazy lamb!"
"Can you see that I'm a knitter?"

Thank you, Secret Pal! Your gift made Monday quite enjoyable. By the way, there was an extraneous pen at the bottom of the box. I'll save it and send back to you at the end of the exchange.

There hasn't been much knitting going on. I managed to knit two rows on the Jenna sweater, in between chasing Emma away from the plants in the living room. It never fails that as soon as I sit down to knit, she's doing something she wouldn't ordinarily be doing. I worked on Tom's scarf as well and it should be complete after about four more inches. Who knows? He might get to wear it yet this winter spring.

Perhaps some of the malaise I've been feeling this week is because of the weather. For April, it's been brutally cold (except for a couple of glorious 80-degree days, which I spent inside an office building). When I opened my office on Monday, a blast of cold air hit me. I didn't think anything of it; the office is usually a bit chilly after the weekend. However, it never warmed up. By the end of the day, I was wearing my coat and covered my head with my scarf, hijab-style. The ritual adjusting of the thermostats by Building Maintenance was ineffective. On Tuesday, I was prepared. The same blast of cold air greeted me upon my arrival, so I whipped out my handy-dandy digital thermometer and placed it on my desk. Slowly, ever so slowly, it crept up to 67.1. I called Building Maintenance and this time they sent a guy with a ladder. After poking around in the ceiling a bit, he announced that the heat was off and very kindly turned it back on. By the end of the day, the office was a reasonable 72 degrees. But I still haven't quite thawed out.

And it's not going to get much better. On Monday, the forecast for this weekend was calling for it to be in the mid- to upper-60s. Today, the weekend forecast is for snow. My biggest fear is that we'll skip spring entirely and head straight into August, which often happens in this neck of the woods.

So, what's on the agenda for this week? Probably very little knitting. This weekend, I'll start cooking for the Y2Knit and Modern Yarn Retreat at Kirkridge at the end of the month. Tom is also raring to strip the wallpaper in the back bedroom and demolishing the closets, in preparation for the plasterer. That means that we'll be emptying closets (yikes!) and moving all the furniture out of that room. Heaven knows where it's going to go.

Just thinking about it makes me want to curl up and go to sleep, like Emma. (I was going to include a picture of Emma curled up on the couch, but Blogger is being a bit recalcitrant and is refusing to accept the photo.)

This weather has just been ridiculous!!! I'm ready for spring, darn it all!

But I'll bet that package put a little of the "spring" in your step! (hee-hee!!! I entertain myself to no end...) What a thoughtful pal you have there.

I'm so glad you you liked your package! It seems as though we'll be doing similar projects this weekend, I have some wallpaper stripping, painting and new wallpapering to do - which shrinks the kniting time down considerably. Happy knitting and have a great weekend!
From,
Your Secret Pal

What a cute little poem. I love the line, "can't you see that I'm a knitter!" Very funny!

I hear you on the weather. It is indeed very odd! as for your office, 67 usually has me curled up under a blanket at home - brr!