As most of my loyal readers know, Tom and I have been searching for another cat to help fill the immense hole that was left when Jezebel died. It feels like we've been making weekly trips to the animal shelter, spending time with various cats and kittens. And yesterday, I found our new cat.

The trip started like all other trips...walk up the right side of the cat adoption area and see which cats are still around. Lucky and Timone were still there and there were some new cats, including three huge male Persian-type cats (without the pushed-in face). Then it's a walk down the left side. The first cage had three young cats, about three or four months old. Two were black and white and one was a female brown tabby. She sat at the back of the cage and just looked at me. I looked back. And I knew then that she was the cat we've been looking for. The way she looked at me reminded me of the way Jezebel would look at us.

I visited with her for a long time. The volunteer said she was very shy and would need a lot of patience and work. But by the time our visit ended, I had her purring and laying in my lap. She is timid, but our house is very calm and quiet, and I don't think it will take too long for her to get used to us. The adoption will be finalized on Tuesday and she'll be spayed on Wednesday and then she gets to come to her new home.

As I was finishing up all the paperwork, a woman came in to give up a cat. She said her beagle was mean to it and they couldn't keep it anymore. The volunteer opened the carrier, took one look, and immediately asked what was wrong with him. He had been sick and the vet put him on antibiotics, according to the woman. The kitten was dying. He didn't move at all. When they took him out of the carrier, he was limp and kind of scruffy looking. He didn't look well cared for. They called for an animal control officer to euthanize him. It nearly broke my heart. How can someone let their pet get in such a bad way? And even if it was a rapid decline, how could they justify bringing the animal to the shelter? This little guy needed to go the vet, not to be given up.

It also reminded me of Jez's last days, which made me extremely sad. Tom and I haven't stopped grieving yet. Having a new cat will help, but I'm afraid that, at some level, we're going to expect the new cat to be like Jez. I know she won't be, but that fear is still there.

It will be interesting to see how our new cat will react to all of the fiber in the household. Knitting could become extremely challenging after Wednesday.

Mountain Goat and Moguls
Fresh batteries and pictures of the Mountain Colors yarn. The Moguls yarn is the slubby stuff. 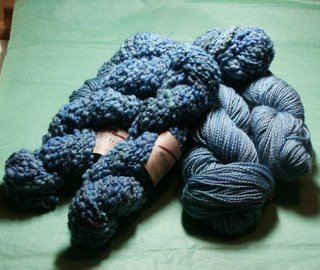 I wish you many, many wonderful years of love and compantionship with you new kitty. thank you for going to a shelter and saving a life :)

i do not think we ever forget the loving pets (and the randomly kind of nutty ones) that we've had in our lives. that's why we love them so much, because they just aren't with us long enough.

Congratulations!!!! I am so happy for your having found that new special member of your family. Don't worry. Cats have a way of asserting their own presence. She will tell you what she needs and you will learn all about what she likes best. You are a "cat person." It's an instinct thing...

And she will loooooove all the fibery goodness!

Oh, I am so glad you found "the" cat! It sounds like you made a great connection with her. :)

Congrats on the new kitten. I cannot wait for her introduction to the internets. And I'm sure, like you are, that once she is accostomed to her new life that she'll come out of her shell.

I'm so glad you found a new cat! I hope she adjusts smoothly and that she makes an ideal companion to your fiber!

I'm so glad you found your new cat!! I can't wait to hear all about her and see pictures and all that . . .

Your other story, though, about the poor kitten? Made me cry a little at my work desk . . . :(